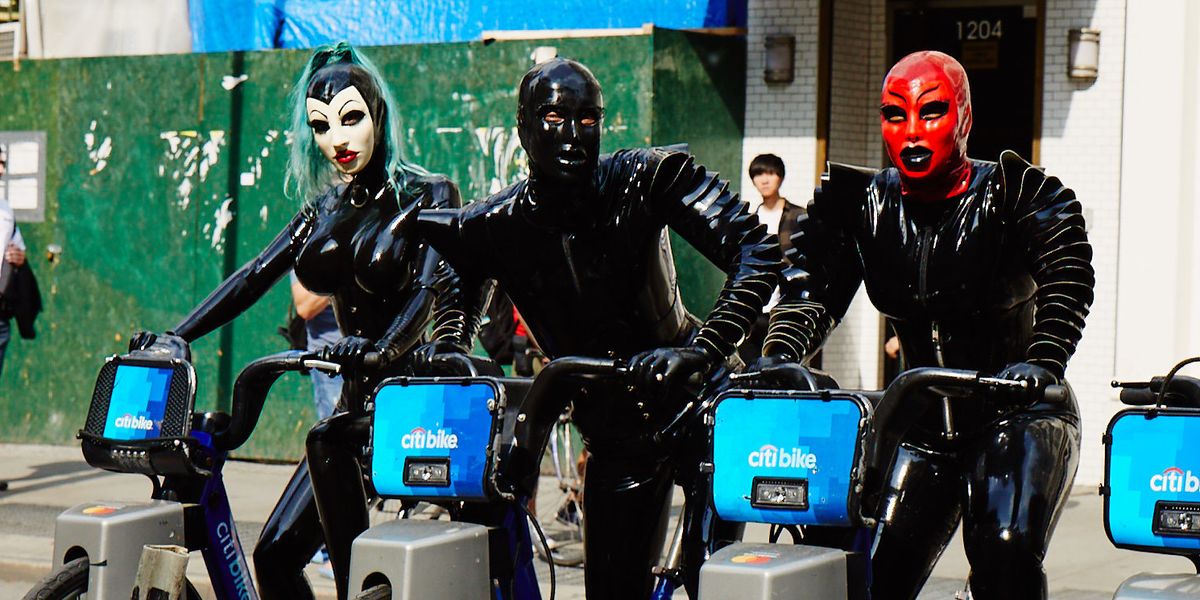 Rubber Queen Mistress Ariana Chevalier on the State of Domme-ing

A long-time veteran of NYC's domme scene, Mistress Ariana Chevalier has been a fixture of the fetish scene since way before domme-ing had become a pop cultural fascination. From helming the city's biggest, woman-run dungeon to being on the frontlines of Bloomberg's infamous brothel crackdown — which shut down dungeons on the basis of New York's antiquated sodomy law — Chevalier has seen it all.

A rubber specialist, Chevalier has traveled across the globe to meet clients who had heard of her legendary skills. Armed with an arsenal of hoods, catsuits, and whips accumulated over several decades of working, Chevalier is, arguably, the person to call when you want to explore rubber play.

After all, she's been in the game since the mid-90s. While searching for a second job, Chevalier dove headfirst into the femme domme world after getting hired at a dungeon purchased by a husband-wife team. The only downside? The man in charge overtly told Chevalier that she "wouldn't be able to make as much as any other women because of [her] skin color."

That said, she spent this formative period honing her craft and making sure that every client who came her way always had the best time — to the point where she "eventually was booked the entire time." Unfortunately, it also soon became apparent to her that "money was going missing."

Fast forward to Chevalier's decision to break away from the male-owned dungeon and start her own with two other women. And she hasn't looked back since.

Eventually, Chevalier founded her own dungeon — NYC Rubber Studio — which, to this day, is the largest fully female-owned and operated space in Manhattan. Equipped with four different playrooms, including an intense "Torture Room" and a more domesticated "Parlor Room," it's a rubber-lover's paradise — providing for a fetish experience that's still relatively uncommon in America.

Which also begs the question, how has the art of domme-ing faired in a society that's growing more and more accepting of different sexual fetishes and proclivities? Well, according to Chevalier, it's a double-edged sword.

While domme-ing has become more accepted in the mainstream, with that visibility comes some issues for "purist" dommes such as herself. As she explains it, in an age where shows like Netflix's problematic Bonding seem to be a dime-a-dozen, Chevalier says that the industry has become a fraught place for actual dominatrixes.

"Everyone thinks they can domme," she says, citing issues with wardrobe, skill, and conversational style. "On social media you see all these girls twerking on Instagram in booty shorts, asking for money, calling themselves dommes. That's not domme-ing."

Explaining that she pines for the old days when domme-ing was more "underground," Chevalier believes there's a dearth of skilled dominatrixes who truly want to make fetishwork their lifelong career. Instead, Chevalier thinks that the advent of "Instagram girls" advertising themselves "fin-dommes" has harmed the "actual" dommes who spend years (and thousands of dollars on) honing their craft.

"On social media you see all these girls twerking on Instagram in booty shorts, asking for money, calling themselves dommes. That's not domme-ing."

Make no mistake though, Chevalier is more than happy to help set newer dommes on the right course — they just need to be eager to acknowledge and respect the legacy of domme-ing, while also being autonomous, free agents who work for no one but themselves.

"I want them to be fully independent," she concludes. "Take classes, study. I can't teach you skills, but can always point you in the right direction."