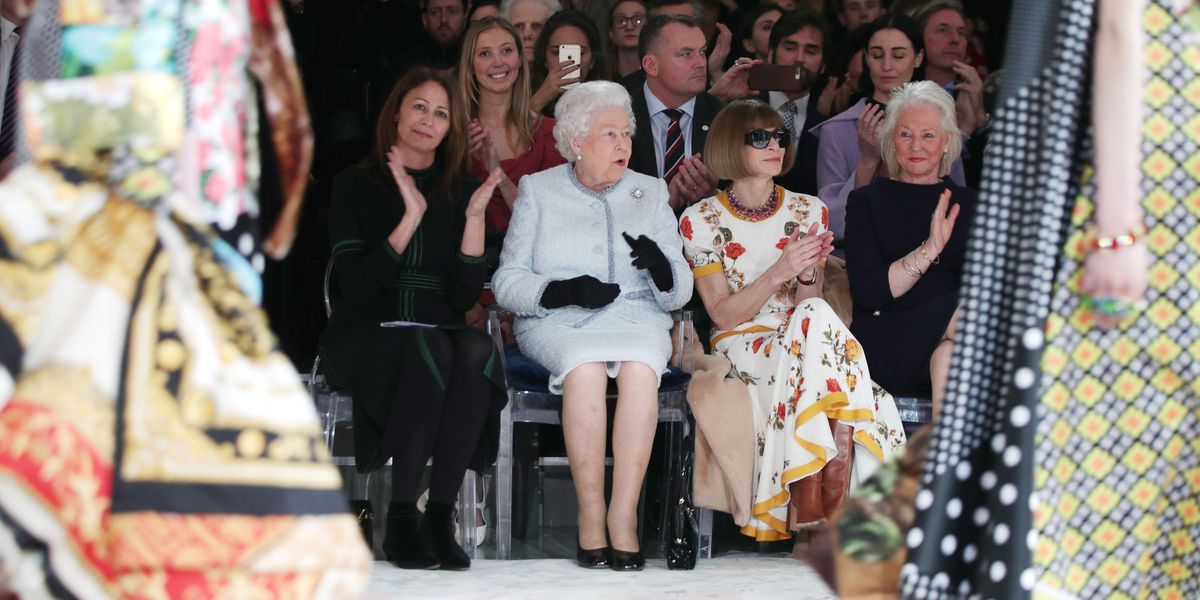 Fashion week always has its fair share of larger-than-life characters, but both industry insiders and media were shocked to see Queen Elizabeth II sitting front row next to Dame Anna Wintour for Richard Quinn's Fall 2018 show. All eyes were on Her Majesty in a beautiful duck egg blue suit. Quinn's designs featured breathtaking floral prints, and seemed a fitting tribute to the Queen's presence.

But why did she visit in the first place? To bestow a young emerging designer with the Queen Elizabeth II Award for British Design, created by the Queen's personal advisor and dressmaker, Angela Kelly. (Kelly's official title is Personal Assistant, Adviser and Curator to Her Majesty the Queen, Jewellery, Insignias and Wardrobe. Fancy!)

According to the royal family's official Twitter account, "The Award, initiated in recognition of the role the fashion industry plays in society & diplomacy, will be awarded annually to an emerging British fashion designer who shows talent and originality, whilst demonstrating value to the community and/or sustainable policies."

The Award, initiated in recognition of the role the fashion industry plays in society & diplomacy, will be awarded annually to an emerging British fashion designer who shows talent and originality, whilst demonstrating value to the community and/or sustainable policies. #LFW
— The Royal Family (@RoyalFamily) February 20, 2018

Richard Quinn a 28-year-old B.A and M.A graduate of Central Saint Martin, and formal intern for Christian Dior and Richard James, deserves every ounce of the award. Last year, Quinn also won H&M's 2017 Design Award. The perks included €50,000, a year's worth of mentorship with H&M, and the opportunity for select pieces to be sold in-store.

With a brand that only launched in 2016, and publicity gifted by none other than the Queen herself, we're sure to see more of his designs in the near future.

Who knows, this may be another Jason Wu x Michelle Obama effect!