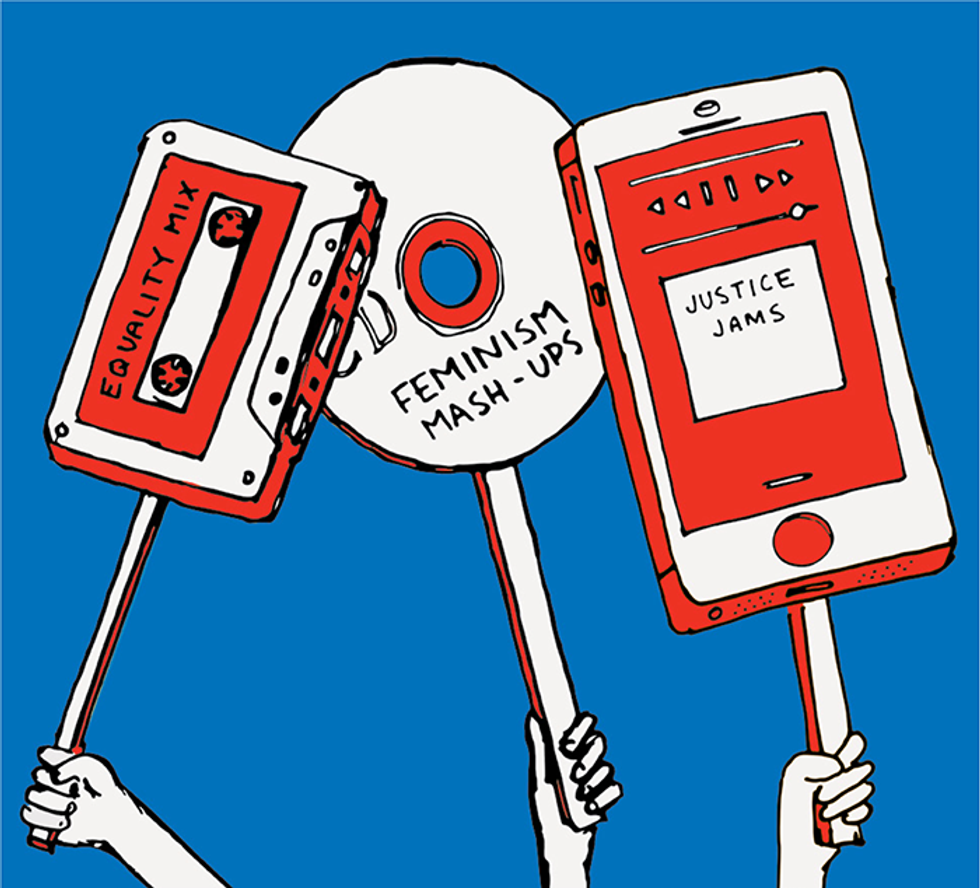 by Michael Tedder / Artwork by Braden Graeber
PAPERMAG
Don't even try to tell Nadya Tolokonnikova of Pussy Riot that music this century has been largely apolitical. Pushing back is what she does, and she is ready with a retort. "If you look hard enough you always can find some political agenda in art and music out there," she says. "It seems to me that it's just a question of your focus."

But while there's always been protest music underneath the surface for those that want to go digging for it, the past year has seen enough pieces of outspoken political art that even the most casual of observers couldn't ignore the outcry -- even if they wanted to. Last year both Run the Jewels and D'Angelo released albums that repudiated police brutality, while Against Me!, EMA and tUnE-yArDs tackled transgendered rights, the surveillance state and harmful beauty standards, respectively. This year has only seen an escalation, as Kendrick Lamar's To Pimp a Butterfly, one of 2015's most acclaimed albums, finds the gifted rapper examining the social cost of generations of economic inequality, while new albums from Sleater-Kinney, Titus Andronicus, Refused and Conor Oberst's band Desaparecidos go hard on everything from mental health stigmas to the rotten history of Colonial America. "Music can do almost anything if you can get people to listen," says Refused drummer David SandstrÃ¶m, who recently reunited band will release their first album in 17 years, Freedom, out now. "The least it can do is channel ideas, which is a lot."

Below, we speak with both SandstrÃ¶m and Tolokonnikova about their time in the protest music trenches.

For a while, protest music was fairly rare in both mainstream and even to an extent in underground music. There were occasionally people speaking out, but not many. But now we have your band and several other artists using their art to bring attention to important issues. Does this sort of thing just follow a cycle, or do you think there's a reason so many people are starting to speak out now?

SandstrÃ¶m: I think when speaking about artistic expression one must always bear in mind that the artist is always in hers or his -- why is it so hard to establish a gender-neutral pronoun in the English language? -- own world. Artists employ their own specific filters to interpret and process the world around them, and whatever makes their expression extraordinary also works the other way: there's nothing ordinary in how the world impresses a creative person. I'm saying this to clarify that someone who, for example, writes songs for a living is not in the world like most people are, and that's sort of the function of people like us: for someone in society to be able to not just take a step back and see what's going on, but to sort of exist a step back (or to the side or beneath or whichever way you want to look at it); to look at the human endeavor and comment/illuminate/portray. So maybe as a result of this position, there's a latency in our response to certain catastrophic events in the recent past, such as the global economic crisis, the Arab spring, Putin's calculated insolence in the Crimea, the renewed sprouting of the fascist germ in Europe, the surveillance epidemic in the US and its related scandals, etc.

There's also the issue of habituation to a radically altered media landscape; there's a reactive element to writing political songs, and how do you process and react to a terrible current event when ten new ones flood your phone every five minutes? I think this new hyper-awareness is detrimental to certain artistic sensibilities. We live in a tumultuous era, and the turmoil has never before been so accessible, if not inescapable. On our new record we write about the refugee crisis in the Mediterranean, the myriad conflicts plaguing the Congo, Europe's complicity in many of the humanitarian catastrophes that its NGOs are fighting (sometimes, if not often, counterproductively) to end, the specter of fascism [in Sweden], and sometimes I wonder if we're just adding to the roar.

As an artist that was outspoken in a time when few were, did you ever feel alone or frustrated?

SandstrÃ¶m: No, not really. We were part of a subculture where a certain degree of political awareness and activism basically was required. This was the Swedish and European punk/hardcore scenes of the '90s. So we've all come of age, specifically me and frontman Dennis LyxzÃ©n, surrounded by certain ideas, by the Sisyphean mentalities of various extraparliamentary leftist groupings. So if we've felt alone, it has been because none of these movements inspired commitment and participation in us, but maybe that's a good thing. To keep formulating and revising, to stay intellectually independent, however inviting the homogenization of those collectives may seem. Also, these days, on the flipside of the roar, it's easier to find voices and minds akin to one's own.

Refused is returning after a long absence, and your new record is as fiery and outspoken as ever. What made you want to come back?

SandstrÃ¶m: It was more a cluster of coincidences and then several small adjustments to them than a big decision. But it was obvious after a while that we needed the band, personally, all of us. Not all types of music can bear the weight of big ideas, most songs tell you about the human condition, relations, emotions, they're like padding between people and their experiences. Flannery O'Connor wrote: "Experience is a terrible teacher"; songs can mend and soothe us when we go through shit. But that's not what we do -- our job is to evoke wrath, to provide an arena for catharsis. Madness and chaos, it's productive, and great for coping with a complicated and terrifying existence.

A Q&A with Tolokonnikova

Were there any particular musicians or artists that inspired Pussy Riot?

When did you first become politically aware? Is it just something you can't avoid noticing when you grow up in Russia?

Tolokonnikova: I was 12 when they arrested Mikhail Khodorkovsky. I found out about his arrest through stickers that I suddenly found on every wall of my town (I lived in Siberia at the time). "Khodorkovsky GO HOME" the stickers wept.

"Who is Khodorkovsky?" I asked my father.

That question was the start of my political curiosity.

Your band's case made headlines around the world after you were arrested. Were you ever surprised by how many people who had never even been to Russia were sending you support?

Tolokonnikova: We're standing in the cage made of plexiglass. Khamovnichesky District Court. August 2012. Today we have to give our closing statements. We've slept two hours 'cause we've been preparing our speeches almost all night.

"Madonna just appeared in a balaclava at her concert, with 'Pussy Riot' written on her back," our lawyer says to us.

We are looking at our prosecutors and understand that their game is already lost. No matter if they will give us several years in a penal colony or not.

Obviously none of us could explain to ourselves [why we got] such a big amount of support. It was just a miracle.

Because of your actions, more people are aware of the abuses of Putin. Are there any other ways you think Pussy Riot's protests made an impact?

Tolokonnikova: Yes, we've made balaclavas look cooler than ever.

You were released in late 2013. Did the experience of being imprisoned make you think twice about ever protesting again?

Tolokonnikova: When I was released my first words were something like "We will get rid of Putin!" If you are a political activist, prison can only make you an even bigger badass for the government to deal with than you've been before.

What is next for you and for Pussy Riot?

Tolokonnikova: We'd like to overthrow Putin, but if we fail we'll probably just continue to do music videos.

Finally, how did you come to appear on House of Cards, anyway?

Tolokonnikova: We just met (House of Cards showrunner) Beau Willimon at a PEN gala and had a great conversation on Russian-American relations, and then Beau said that we should be in HoC as opposition to Mr. Petrov (who's of course Mr. Putin). Obviously we said yes 'cause we are huge fans of the show.