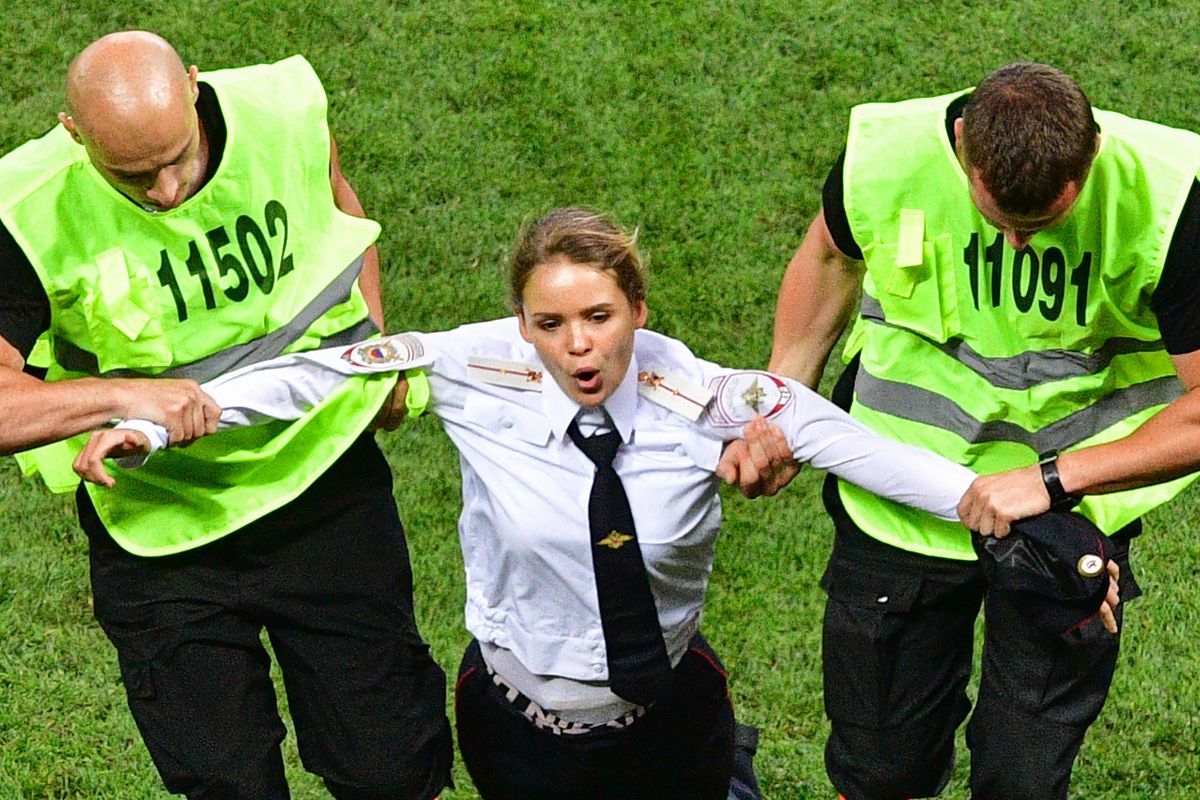 Sunday's World Cup protest in Moscow saw Pussy Riot members Veronica "Nika" Nikulshina, Olga Kuracheva, Olga Pakhtusova, and Petya Verzilov run onto the pitch between France and Croatia in old-fashioned police uniforms. The action was called "Policeman Enters the Game" — which, yes. They were subsequently arrested and given 15-day sentences.

On Tuesday morning, the Pussy Riot collective released a video for "Track About Good Cop," which is a song about an imaginary good cop. In the video, the male officer is a just and ultimate authority figure who kisses other officers and dances in the elements. The video's description on YouTube cheekily states that Russia's Ministry of Internal Affairs with styled the video. Additionally, a list of demands have been published in the description; which you can read, below:

The New Yorker reports that once Pussy Riot claimed responsibility for Sunday's action, the group credited Russian poet and performer Dmitri Aleksandrovich Prigov as a source of inspiration behind the police uniforms. (He died 11 years ago yesterday). Prigov created an image of an ideal policeman, referenced in Pussy Riot's "Track About Good Cop" video, and in their statement following the World Cup action, called this the "heavenly policeman." In the Pussy Riot statement, the idea of the heavenly policeman is in stark contrast to the human one; in Vladimir Putin's Russia, many people are incarcerated for a variety of political crimes related to dissent, including liking and sharing anti-establishment posts on social media.

The "Track About Good Cop" video also arrives moments after news about the European Court of Human Rights' condemnation of how the Russian government treated those arrested during Pussy Riot's "Punk Prayer" church protest in 2012. If you'll recall, Pussy Riot members wearing face-concealing balaclavas took over a church and sang lyrics against Putin including, "Virgin Mary, put Putin away." BBC reports that the treatment of three Pussy Riot members' prosecution violated five articles of the human rights convention, including: transporting them in "overcrowded conditions," humiliation during trail, restricting access and contact with lawyers, prolonging their pre-trail detention, banning online content, and condemning their clothing without justification.