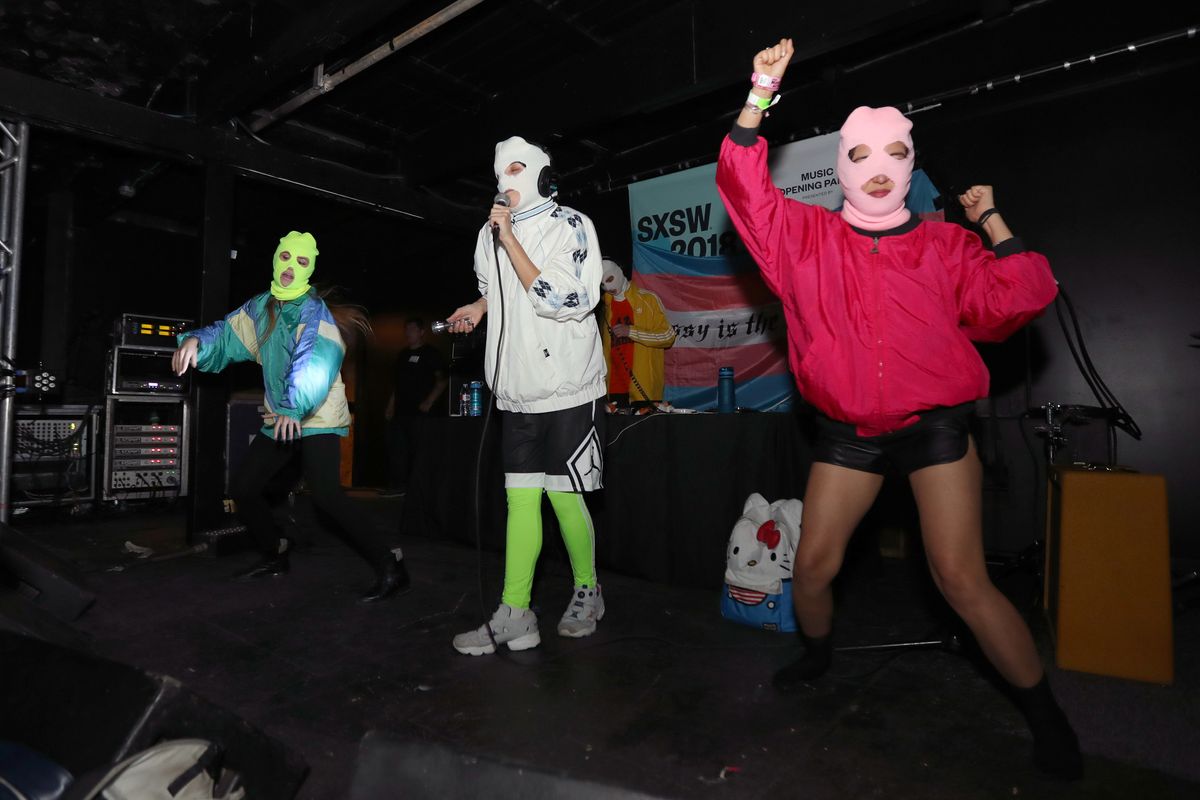 Punk band and activist group Pussy Riot has garnered an international following for their fearless guerrilla activism against Russia's President Vladimir Putin, some of which has landed them in jail. Yesterday, following Putin's... inevitable reelection, the group released a new song and video called "ELECTIONS" that critiques the Russian government's autocratic rule.

The video is eerie, featuring masked figures posing in dark, flickering backdrops as whispered lyrics are rapped over distorted instrumentals. Though the song and video evoke a sense of unease, a look at the lyrics makes it clear that Pussy Riot feels it is Putin who should be afraid. Throughout the song, they outline the ways they plan on rebelling against his unchecked power. Many of the lines begin with "6 years" — "6 years we gonna fight," "6 years we not gonna obey" — a reference to the length of a Russian presidential term. Rather than resigning to another term in which the government violently misuses its power, the group plans to use it as a time to make the Kremlin "extremely nervous."

The video also features illustrations of barbed wire, Pussy Riot's famous balaclavas, and Russian buildings. The drawings were done by Oleg Navalny, the brother of Putin's primary opposition (who was not allowed to run), Alexei Navalny. Oleg Navalny has been serving a three-and-a-half-year sentence for supposed embezzlement charges, and Alexei and Pussy Riot think he is being unjustly held as a political prisoner.

Related | Why Did Heron Preston Put Putin's Face on a T-Shirt?

The band has released a statement accompanying the song, making it clear that the March 18th elections were not democratic, and that Putin's rule has been catastrophic for the Russian people. They said,

What 18 years of Putin's power has brought to us? Arrests, poisonings, tortures, murders of political activists. Institutional corruption which is HUGE. Total erosion of democratic institutions. Giant economic inequality. Worsening of prison conditions. Environmental catastrophe in lots of industrial regions of Russia. Censorship everywhere - in media, in education, in internet, in people's heads. Self-censorship, caused by fear. You should not be deceived, this event on 18th of March is not elections. Falsifications, eliminations of political opponents, Kremlin-controlled media leave no chance to anybody except Putin. Pictures that you can see in the video were painted by Oleg Navalny, a political prisoner, who was convicted to 3.5 years in jail because he's a brother of Alexey Navalny, Putin's fiercest political opponent.