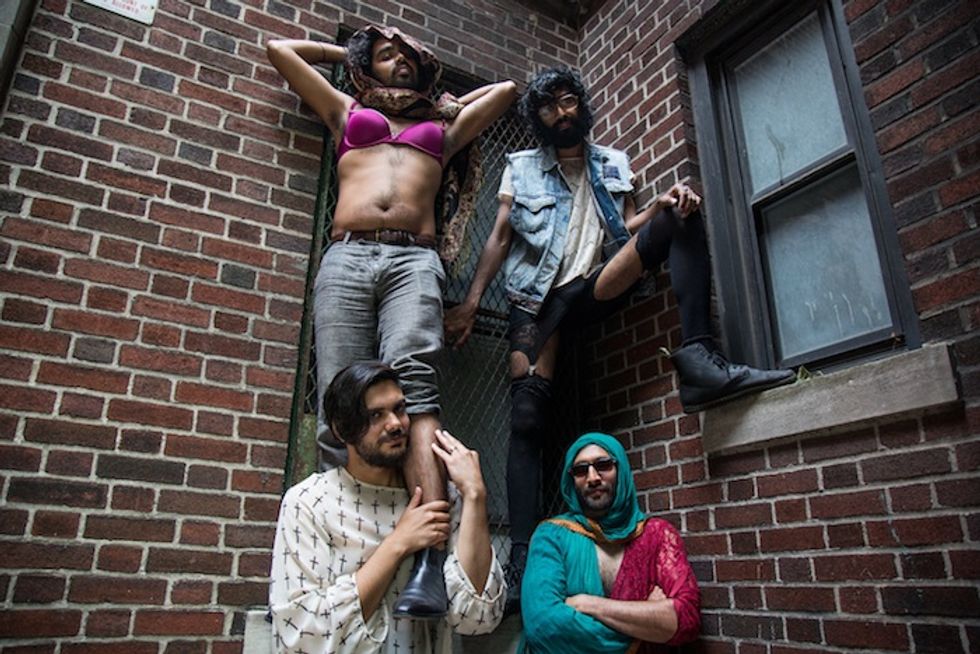 by Sarah Sahim
PAPERMAG
[Photo by Miles Dixon]
Though continued racism and Islamophobia often causes many brown people living in the West to downplay their cultures to try to "fit in," Boston-based 'Post-Colonial South Asian punk band,' The Kominas, are doing exactly the opposite. They're brash, raucous, and hilarious; they're overtly and unashamedly brown and they very clearly do not give a fuck about what you think of them. With titles like "Pigs Are Haram" and album art featuring a handcuffed man in a bra and panties being fed sweets by a woman in traditional South Asian dress, their new record Stereotype, out now, sees The Kominas reclaiming their Desi identities in a powerful way. I sat down with band members Basim Usmani, Sunny Ali, Shahjehan Khan and Karna Ray to talk more about their new album, defying stereotypes and using humor as a tool for social commentary.

Did you know you wanted to be an all-South Asian Punk outfit from the beginning or was that an organic process?

Sunny Ali: I'd say it was organic. We like calling ourselves "Brown Punk" because none of us were born in Pakistan and Karna is Indian -- we like using color to describe our sound. We've been describing ourselves as a "Post-Colonial punk band" lately.

Shahjehan Khan: The band began just like a lot of American bands do, in a basement in suburban America. I think that any PoC can identify with our music, but any human being with a shred of consciousness about the state of America or the world in 2015 can identify with what we are saying.

Western curriculums try so hard to cover up their colonial past. Do you feel that the Post-Colonial Punk label enables you to reclaim your ethnic identities in a way that's empowering?

Sunny Ali: It kinda turns the tables on the way people have been describing us -- gives them some perspective. Not sure if any other bands describe themselves that way but would be cool if that caught on.

Basim Usmani: We have a lot of intersectional elements going on and identify in a lot of ways. I embrace Muslim Punk wholeheartedly because we have seen Muslim Americans have their language policed. There's a huge freedom of speech issue for American Muslims currently; a lot of us have valuable perspectives on what's going on world wide, but there's so much self-censorship because kids don't want to be arrested for an inchoate crime.

Considering some white people have argued we're living in a "post-racial society," it's important that these labels are designated by people of color on their own terms.

Karna Ray: I've never heard that argument [about being in a post-racial society] from someone who wasn't in the process of alleviating some hereditary racial guilt or justifying their privilege. It's a phrase used I think uniquely by white people and indicates how far up their own ass they are. It's terrifying that people who hold that belief are utterly committed to the objectivity of that perspective, as if their esteemed passage through life extends to everybody around them. Whiteness in that way is the behavior of assuming the neutral position and that you possess the ability to supersede issues of race, nation, gender, creed etc. For anyone on the outside it's an obvious expression of power and a pretty big fuck you.

Shahjehan Khan: We are absolutely intending to be "that band" that throws everything on its head as Sunny has pointed out. It still takes really pushing the envelope in order to begin a dialogue about anything that has real depth and weight, be it politically, socially, or spiritually. It is absolutely crucial for us to put our own words into the dialogue. We have already had much experience with having our music/lyrics/message whitewashed and dumbed down. I suppose that's understandable to a certain extent because it takes time and stages in order for whatever dominant group to allow the "other" into it. However the cool thing now is that we PoCs have much more power than previous generations might have had and we can be found in all professions (like journalists!), and thus we can finally speak our own narrative, in our own words.

Listen to Stereotype, above
You use humor on Stereotype to comment on the current status of brown people in society, and it's executed in a way that is clearly going to make white people uncomfortable.

Basim Usmani: A lot of youngster whites have social circles that are 100% white -- that's the precedent. They don't necessarily know any better. That's the reality of punk shows or mainstream rap shows, or indie rock -- these are white spaces. We took a lot of similar topics that bands like the Clash, or Dead Kennedys would have run with anyways but added our own insights to it. It really does feel weird to be playing in spaces where there aren't many PoCs. But we have to make this cultural change happen. Due to white self-segregation, our fans have never felt welcome at these shows. Which is ironic because rock or punk is incredibly popular in Asian countries.

Beyond defying prejudiced Western standards, it seems like some of what you do is intended to shock or subvert South Asian conservative norms -- i.e. the way you guys  openly experiment in terms of dress, lyrical content and artwork with the cover of Stereotype being a shining example. Can you speak to that?

Shahjehan Khan: As South Asians you could say we are attempting to de-stigmatize creative endeavors as not just "hobbies" but crucially important facets of who we are and where we "come from."

Even in the rare instances we're 'represented' i.e. The Mindy Project, the character is still an OBGYN. South Asians have historically created wonderful forms of art in all forms but there's arbitrary societal pressure to adhere to that 'model minority' complex.

Shahjehan Khan: You do have people doing incredible things these days though, and breaking through so that they are are accepted and lauded not only independent of their racial or ethnic background but in fact within their communities as "our pride" in a way: Riz Ahmed, Rasika Mathur, Hassan Minhaj, Mira Nair, Munaf Rayani, Shilpa Ray to name just a few.

I would argue that art (whether through music, storytelling, or a visual medium) is the best way to reach someone who otherwise might not be reachable to you. It's what can truly touch a person's heart.
You May Also Like
NSFW