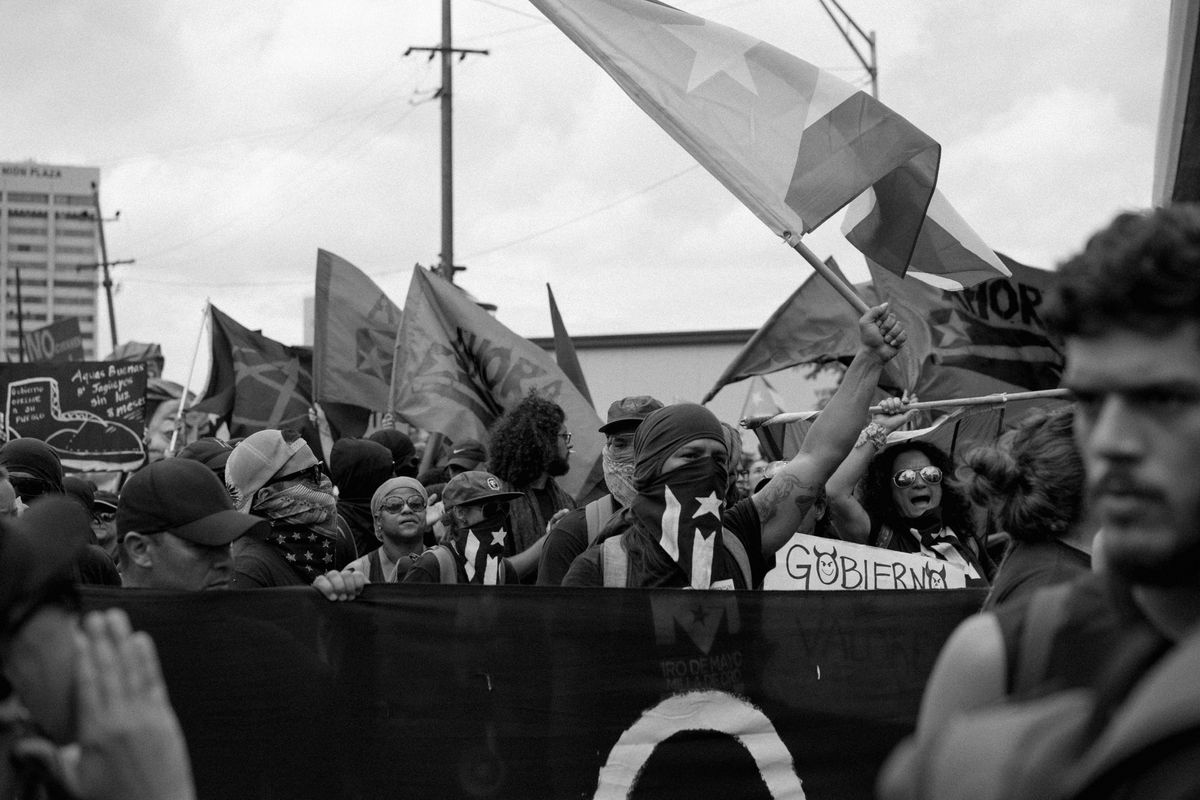 The International Workers' Day protest in Puerto Rico yesterday was generally peaceful from early morning until about 2:15 PM, when the event devolved into a frightening melee as police repeatedly launched tear gas in attempt to disperse the crowd. Hundreds were affected by the chemicals, including children; many people were injured in the chaotic stampede as they fled.

Videos and images shared on social media and news outlets show a frantic, disturbing scene: Thick clouds of gas, police in protective riot gear striking protesters with batons, and people running and screaming, coughing and red-eyed from the effects of the chemical.

The event — #ParoNacional, or National Strike — drew thousands of workers, teachers, students, and activists to the Milla de Oro, San Juan's financial district, seeking to publicly oppose tuition hikes at the University of Puerto Rico, the closure of 283 public schools (following 179 closed last year), pension cuts, reduction of labor protections, and more. These austerity measures have been implemented by the Puerto Rican government in conjunction with requests from the Fiscal Control Board, a U.S.-appointed supervision board installed two years ago as part of the law PROMESA to address Puerto Rico's $72 billion debt.

What spurred police to deploy these tactics, Governor Ricardo Rosselló said in a press conference hours later, was a small group of protesters who threw rocks and other projectiles at police. Joined by the Commissioner of Safety and Public Protection, Héctor Pesquera, and Police Commissioner Henry Escalera, Rosselló blamed members of the activist group Se Acabaron Las Promesas for the violent acts against police, stating that altogether 15 officers were injured.

While officials denied any knowledge of the use of rubber bullets against protestors, a vendor – who was not participating in the protest but was there selling water and refreshments – was struck multiple times.

Officials also stated acid was hurled at police during the protest, but no video or photographic evidence has surfaced to uphold that claim.

Later in the afternoon, video emerged of a group of about 20 police officers swarming a residential street in Río Piedras, near the University of Puerto Rico's largest campus, approximately two miles from the site of the protest.

Several people were taken into custody during the incident, and earlier at the Milla de Oro, too. Altogether, at least 12 arrests have been reported.


The ACLU of Puerto Rico condemned the use of "disproportioned [sic] violence against demonstrators, reporters and Legal Observers" by police in a statement released yesterday, stating that "a human wall of officers closed off the avenue and set into motion the events that ensued."

The statement closes with more criticism: "It bears repeating that 'ALL OF PUERTO RICO' is a Free Speech Zone. The Banking District, also known as the 'Golden Mile,' home to the venture funds that has partially caused the fiscal crisis, is certainly not the exception. The people have the right to resist government abuse and corruption; and most certainly have the right to take the streets in protest. It is still called the FIRST AMENDMENT."

Se Acabaron Las Promesas has called for another march to begin today at 5 PM in the San Juan neighborhood of Condado.