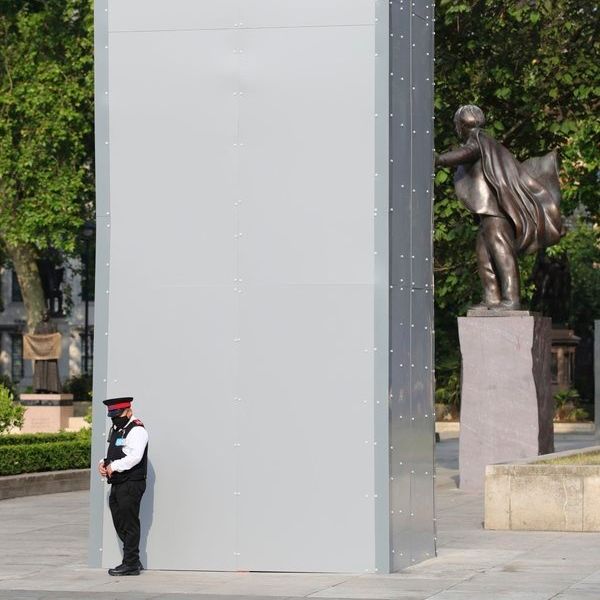 If Only Cops Protected Us Like They Do These Statues

Around the world, as Black Lives Matter demonstrations move forward at full-speed after the violent death of George Floyd, authorities and key government officials are going to extreme measures to protect monuments under threat of destruction by protestors. Many statues in question have connections to racist ideologies, with monuments of Confederate officials and Christopher Columbus already being vandalized in the United States. Twitter users and TikTokers are also making fancams and memes out of the toppling monuments.

In London, officials are preparing for the weekend of protests ahead by removing or protecting statues that they feel are either offensive or under threat of attack. Many activists' calls for a statue of noted slave trader Robert Milligan to be removed from outside the Museum of London Docklands were answered earlier in the week, but other statues are not getting the same treatment. A statue of Winston Churchill in Parliament Square was reinforced and locked up, along with comment from UK Prime Minister Boris Johnson on the statue's significance on Twitter.

The statue of Winston Churchill in London has been boarded up ahead of weekend protests. What an image by AP. https://t.co/KAro4w94QX
— Bevan Shields (@Bevan Shields)1591955293.0

"The statue of Winston Churchill in Parliament Square is a permanent reminder of his achievement in saving this country — and the whole of Europe — from a fascist and racist tyranny," Johnson begins his thread. "It is absurd and shameful that this national monument should today be at risk of attack by violent protestors. Yes, he sometimes expressed opinions that were and are unacceptable to us today, but he was a hero, and he fully deserves his memorial."

The Churchill statue isn't the only monument in London getting boarded up, either; a "protective barrier" has been placed around the Cenotaph in a similar manner to the one constructed around the Churchill statue. While preemptive removals have also become commonplace around the world, some officials are choosing to mobilize immediate law enforcement intervention to protect statues. In Sydney, Australia, a great number of police officers — some mounted on horses — were used to protect a Hyde Park statue of Captain James Cook during a Black Lives Matter rally overnight.

A crowdsourced online map of the United Kingdom called "Topple the Racists" has risen in popularity this week as more pressure is put on public officials to take a stand against racist ideologies and histories. The map lists locations of "statues and monuments that celebrate slavery and racism," as well as short descriptions of the people being memorialized by the structures themselves.

While it's unclear if protestors will succeed in toppling any statues over the weekend — since authorities are on high alert and already seem to be heeding the public's warning by removing some altogether — there's no doubt that Twitter Barbz are rooting for the people.