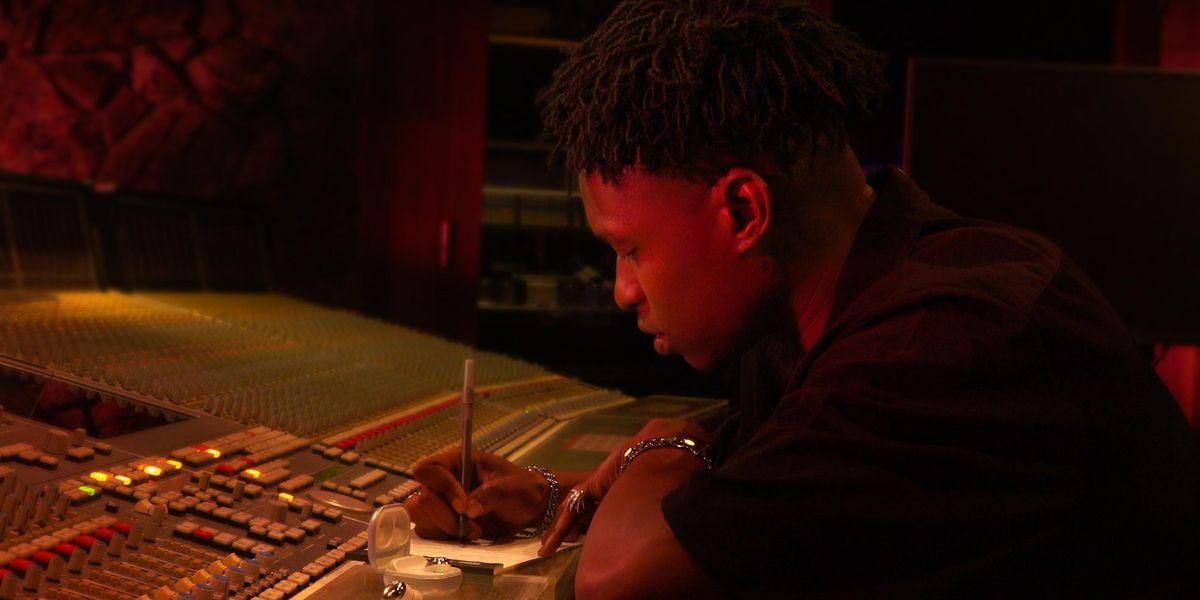 If you've heard one of Lucky Daye's songs — even for just a moment or two — you know what it's like to be inside his world. Some pop stars serve pure concept and others serve pure spectacle, but Daye is a thoroughly modern singer made in the mold of some of our oldest, most timeless stars. He serves pure, distilled R&B vision and nothing less. "All I want to do and all I want to feel while I'm doing this is [to exhibit my creative world]," he says. "It's not about anything outside that, really."

That vision to share nothing but pure music is one he's been honing for years, since growing up among the musical melting pot of New Orleans. It's a drive heard throughout his already-classic feeling oeuvre, which includes three EPs, the most recent being February's resplendent Table For Two, as well as Painted, his four-time Grammy nominated debut album.

Across Painted's 19 tracks, Daye established himself as a classicist with an iconoclast's wit and weirdness — a soul star who, between songs like "Roll Some Mo" and "Real Games," could easily glide from the shimmer of modern R&B to the heartstring-pulling grit of old-school soul. But before Daye was one of pop's great chameleons, there had to be influence from another of pop's chameleons, who came nearly 20 years before: Andre Benjamin, AKA Outkast's Andre 3000.

Initially, Daye came across Andre 3000 by chance. His mother didn't allow him to listen to most popular music in the house, preferring the timeless warmth of gospel. But on occasion, Daye would go to a family friend's house, where he would hear the iconic pop that would become crucial to his sound.

"I fell in love with Andre's voice before I fell in love with Andre. I would sneak in and hear his music, because I wasn't supposed to be listening to nothing outside of what I was supposed to be listening to," Daye says. The first time he heard Outkast, it was at the house of a woman who was teaching him to take care of his hair. "Her kids were cool, I thought, and they knew all these groups and would play all these songs I couldn't listen to. That was part of the reason I was hanging over there. It ended up being like, I walked past the TV and saw 'Hey Ya.'"

The connection was instant. Andre 3000 and Outkast opened up a world to Daye unbeknownst to him that was, on some profound level, revelatory. "I was like, 'We can [make music like] that?' Then I started getting into his other stuff, 'Mrs Jackson,' the older things," he says. From then on, Daye treated Andre 3000 like an education on the ins and outs of avant-garde, ultra-creative pop.

Listen to a song like his Queen Naija collaboration "Dream," a highlight from Table For Two, and you can hear Andre 3000's clear influence, not in any distinct moment, but in terms of the sheer creative freedom. "I did a whole lot of studying with how he approaches his creativity, and to me that was everything," Daye says. "He don't care, really. It's awesome."

Andre 3000 accounts for half of Daye's musical genealogy, but what about the other half? There's a generosity of spirit in much of his music and a song like "Love You Too Much," the wrenching closer of Painted, attests to that. For that side of Daye's outlook, you can thank his father, who introduced him to rich, warm-tinted classics like The Gap Band, playing their music as a daily tonic and early wake-up call.

Listening to The Gap Band also taught Daye about how music should make a listener feel. Rather than background filler, it can be the kind of force that becomes part of the fabric of someone's life. "That memory always stuck with me because it gives me a reason to understand the relationship between the artist and the consumer," he says. "That's the part of consumerism I remember. It really meant a lot to me. Like, I need to make people feel like that."

Listening to certain classics like The Gap Band still has resonance for Daye today, especially when listening with headphones. "I definitely think there are nuances to music in general that you can only experience with headphones," he says. "The older the music is, the louder you should turn it up. Michael Jackson — that's one of the first people where I went back and I turned it up. And every time I turn it up, I hear something new. Every time."

Daye continues, "Even Prince — I recently discovered the art of Prince. I knew his songs, but I just started studying his music, and his inflections and the purpose of why he'd so such things — the hidden gems. That's another artist where I hear something different every time [when listening on headphones]."

Now, he tries to seed his own songs with those kinds of thrilling, headphones-in moments. "I always try to do a little bit of that — ear candy, I call it. Maybe if you turn it up, you'll hear a bit of that candy," he says. A song like "How Much Can A Heart Take", for example, is filled with these rich, rewarding ear candy moments. For a listener like young Daye, it could be an evocative, life-changing moment. As long as they turn it up loud enough, that is. "That's what you're supposed to do — it's a turn up moment."