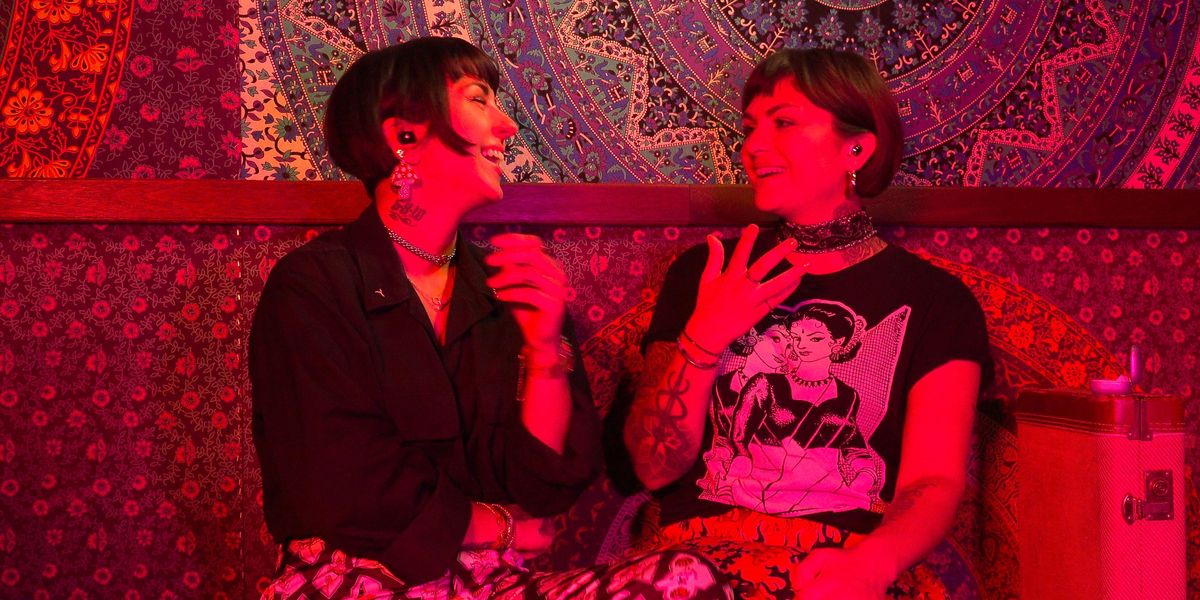 Jahan and Yasmine Yousaf laugh about this now, but back when the sisters were teens — long before they became the electronic act Krewella — they'd argue over music. Jahan would purposely clear out her download history so her younger sister couldn't follow her trail. But Yasmine would find the trashed cache of songs anyway, then secretly re-download all the music she could. "Now, as we're older, it's really funny," she says. "I know all the same songs that Yasmine knew back in the day because I was just stealing [her] style."

Teenage sibling rivalry aside, in hindsight, they've always been in it together. After all, when they first heard ABBA's Gold, they were together, and the sparkling collection of pop excellence blew both their minds. "We have a lot of the same favorite artists," Yasmine says. "We pull from things, a lot of the time, that we're both obsessed with and have been our whole lives."

Eleven years into music-making, in the wake of releasing a highly anticipated sophomore album, zer0, Krewella remains obsessed today with all things music. The two gush about the effect of music on their childhood to PAPER, recalling memories of singing together with excitement and rattling off their early inspirations, as well as the contemporary bands and artists that move them.

Their parents were also major music fans."We grew up listening to literally everything," Jahan says. "We are half Pakistani and our mom is German, Lithuanian, American. And we grew up on the internet — on Myspace and Limewire — pirating music, and going to our local library and flipping through CDs. We were lucky to have exposure to everything from punk rock to bands like Incubus, Bloc Party."

The early 2000s electronic and dance-pop wave dominated by LCD Soundsystem, MSTRKRFT and Daft Punk holds a special place in their inspirations, as does current hip-hop, and the colors, dancing and music of Bollywood films.

Falling generationally in a place where downloading music on a home desktop was as commonplace as renting CDs from the local public library, they got into all kinds of sounds. "We were all over the place," Yasmine says. "We had so much access to music."

Back when the idea of music as a career "was all still a pipe dream," Yasmine remembers that the girls would sing together for fun. Whether via Barbie karaoke — a toy that included tracks by Cher and Madonna — in their basement or harmonizing a capella in the bathroom, they'd gravitate to spots where their voices organically got the best treatment.

"Do you remember the two side banisters, the ledge on the side?" Yasmine asks her sister. "We would both sit on a side because the reverb in that hallway sounded really cool. We would just sit there and sing sometimes."

At that point, they were just experimenting, the two agree. "I definitely didn't understand what it was at the time," Yasmine says. "It was just fun."

By 2010, though, they'd obviously figured it out: the Yousefs had realized their prowess and put it to action. That's when they officially formed Krewella and within a few years were headlining EDM festivals around the world. The combo of 2012's Play Hard EP and first LP, Get Wet, released the following year, was a jetpack that sent them soaring.

Krewella's sound — often described as a mix of EDM, dubstep, and drum and bass — has always been huge, dynamic and expansive. Every song is a pastiche built by tweaking sounds, turning up or driving down specific influences, and adjusting into the mix their own original ideas. And so each track has its distinct nuances with accents subtly woven in, or top lines so well melded that, when played alongside everything else, they sound entirely new.

"Sometimes I think about what we do now as literally a continuation of what we did as kids — playing."

At close listen, the individual parts of Krewella's music — and that of so many others they love — can be picked apart to reveal the greater, incredible whole.

"It's like the textures that you could almost taste, that you can hear in headphones only," Yasmine says, while Jahan echoes that "music is delicious."

Both sisters extol the powerful impact of allowing yourself to be fully absorbed by music — not just theirs, but all kinds. It's transformative.

"If I wake up in the morning in a bad mood," Jahon says, "I have my playlist to go to. Music can literally alter your emotions and your energy."

Consider "Mana," for one. The 2019 single is an empowering femme anthem, with its lyrics about thriving in independence and riding with "middle fingers up." But the robust production behind the vocals is also critical in conveying the track's super-charged energy. Faraway sounding sitar and tabla at the start serve as the gates to Krewella's universe — a wild and infinite place where spirituality and futurism convene, and moments of elated, colorful Bollywood-style highs meet assertive trap rhythms and explosive electronic screeches.

That cut is also featured on zer0, Krewella's most recent full-length. Its eponymous lead track feels like an epiphany, beginning softly and then breaking open at the crest of the build-up for an enlightened, almost overwhelming sensation. Later in the album, there's "Martyr," an introspective trip reminiscent of Imogen Heap; the vocals are, unsurprisingly, chill-inducing, particularly when heard loud and in headphones. There's elements in the narrative of "Overboard," too, that benefit from a volume turn-up; you likely won't hear the small, but pertinent pieces of its tragic narrative if you're not listening closely.

Krewella's latest single is an especially fitting one when considering their fondness for old memories, the way they light up laughing when talking to PAPER about way back when. "Rewind," a collab with Yellow Claw, reflects on time passing — flying, really — as a deep, pounding beat winds up to hyperspeed. Krewella posits, "Is it just me or do you put the same scenes on rewind?"

Maybe time has moved too quickly for their liking. Does anyone want time to speed up, anyway? At least Krewella knows how to hold on to it, too. It's really more than 11 years of music-making they've put in together.

"Sometimes I think about what we do now as literally a continuation of what we did as kids — playing," Jahan says, and her sister smiles alongside her.