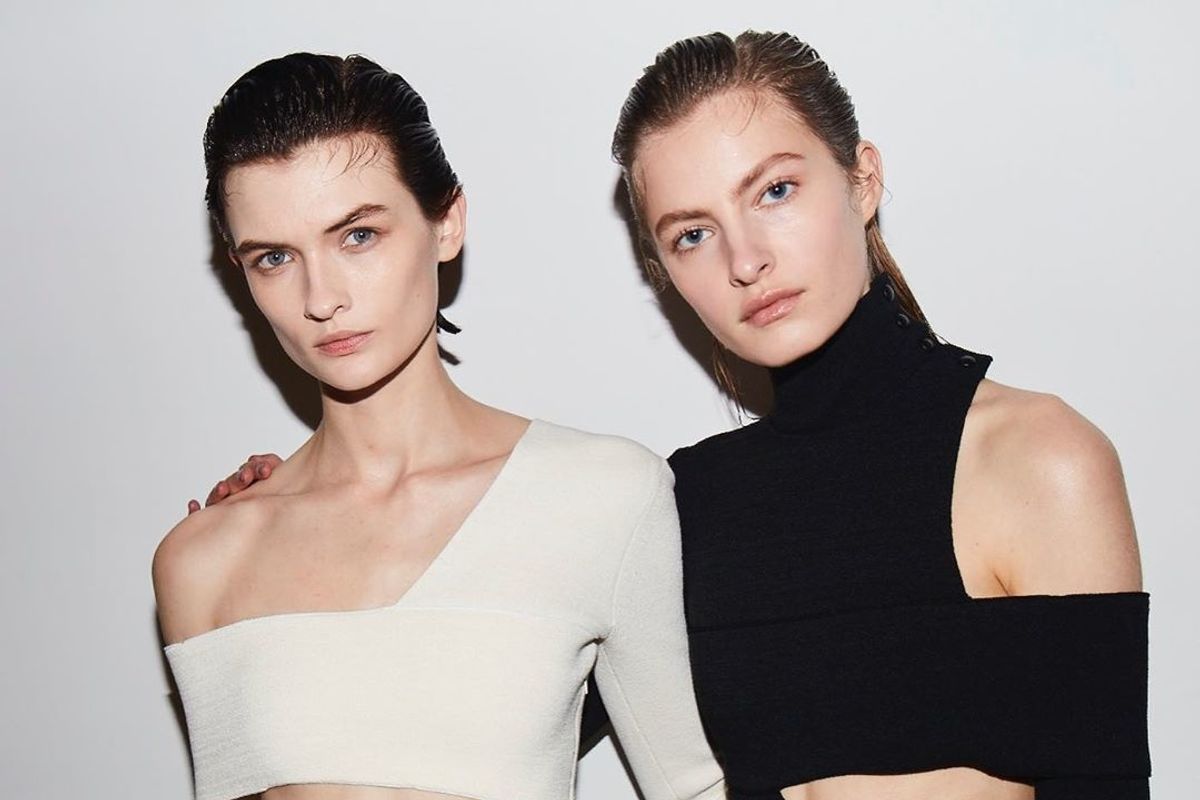 At Proenza Schouler, the Hair Looked Sexy Pushed Back

Proenza Schouler is making fall sexy again. The sharp, skin-bearing silhouettes were a bit of a departure for creative directors Jack McCollough and Lazaro Hernandez, whose designs traditionally skew boxy. Between the intricately deconstructed silk-tweed jackets and flirty tulle, however, were the sensual beauty looks of the night courtesy of Makeup Artist Diane Kendal, Hairstylist Guido Palau and Nail Artist JINSoon.

Kendal struck the right tone by keeping the skin dewy, the hints of all-over highlighter further enhanced with a bright matte red lip. "This season was all about the '90s," she told PAPER. "So we're doing gorgeous, luminous skin, brushing the eyebrows, filling in when necessary, curling lashes, and using a little bit of lip balm on the top of the cheeks to really give that feel. And then some girls are getting a bold red lip. It's completely matte too, so it looks very modern especially against the dewy skin and wet hair. "

Related | We're All Misbuttoning Our Coats in 2020

Palau stayed true to the mid-'90s aesthetic, while turning the heat up a notch, sculpting slicked back hairdos. "I am inspired by mid-'90s, kind of strong, sexy, boyish women in a way," he told PAPER backstage. "It's a very tough gesture. It's like greasy and wet-looking. There's comb marks, there's that point where girls always want to go a little boyish. So this is an extreme version of this."

And if you're sold on creating this sort of grand take on Winona Ryder-esque glam for yourself, the stylist had some very specific suggestions. "I'm using mousse and a 'Hardwear' gel to create that look," he said. "So I'm playing up just to get the volume in first, then I'm putting the mousse and the gel into the front, then getting the comb lines in, and creating the shape. I'm continuing down the length of the hair with mousse and 'Hardwear' gel so it's wet-looking."

Palau also added that it is a lot harder to replicate on longer hair than a shorter length. But the Redken Frizz Dismiss, a product he used generously on all models for the show, can help make the task a lot easier especially when it comes to coarse textures or curly hair.

His last piece of advice for your 2020 fall hair? Keep it messy. "It's a bit more flattering to give the hair a little lift and make it a little messier at the sides," he continued, adding that the trick to achieving the look is not completely pushing it back. "I suppose, in an ideal way the boys would feel like these girls just got out of the shower and they combed their hair back and then they got these amazing clothes. Obviously they can't have the hair that wet with the clothes, so I had to have it dry and stay shiny. "

For nails, JINSoon was brewing her own set of what she cheekily called "moody nudes." The color palette for the night was kept simple: Nude, clear and matte finish.

"It looks really good on everybody and it's just really cool and edgy," she explained backstage. "The main look today is called 'Milieu.' This one has a clear base, top coat, curved lines but only only on the pinky. The other one is the same but with a matte finish. So we have three looks, in a way very exciting, in a way very not exciting, but it's all about care, and also a hint of nail art on the pinky."

In addition to breaking down the nail looks for the night, the artist also had a special announcement to make. The cult nail brand is now launching a new category of nail products she calls "Nail Care." The collection includes a nourishing basecoat, a high shine topcoat and quick dry drops. "The Jin Soon HyperCare series is both nourishing and strengthening," she said. "It has everything to repair damaged nails: AHAs, vitamin E, and vitamin B5."

JINSoon continued, "Every single winter I'm asked, 'Jin, how do you care for your damaged nails with the gels, the acrylics, and all that?' So I wanted to launch this right now because this can be also essential to fashion week. I mean, think about the amount of times the models get their nails done. At one point, their nails are just really sort of ragged and dry. So, yes, think of this as skincare for your nails. That's about it."