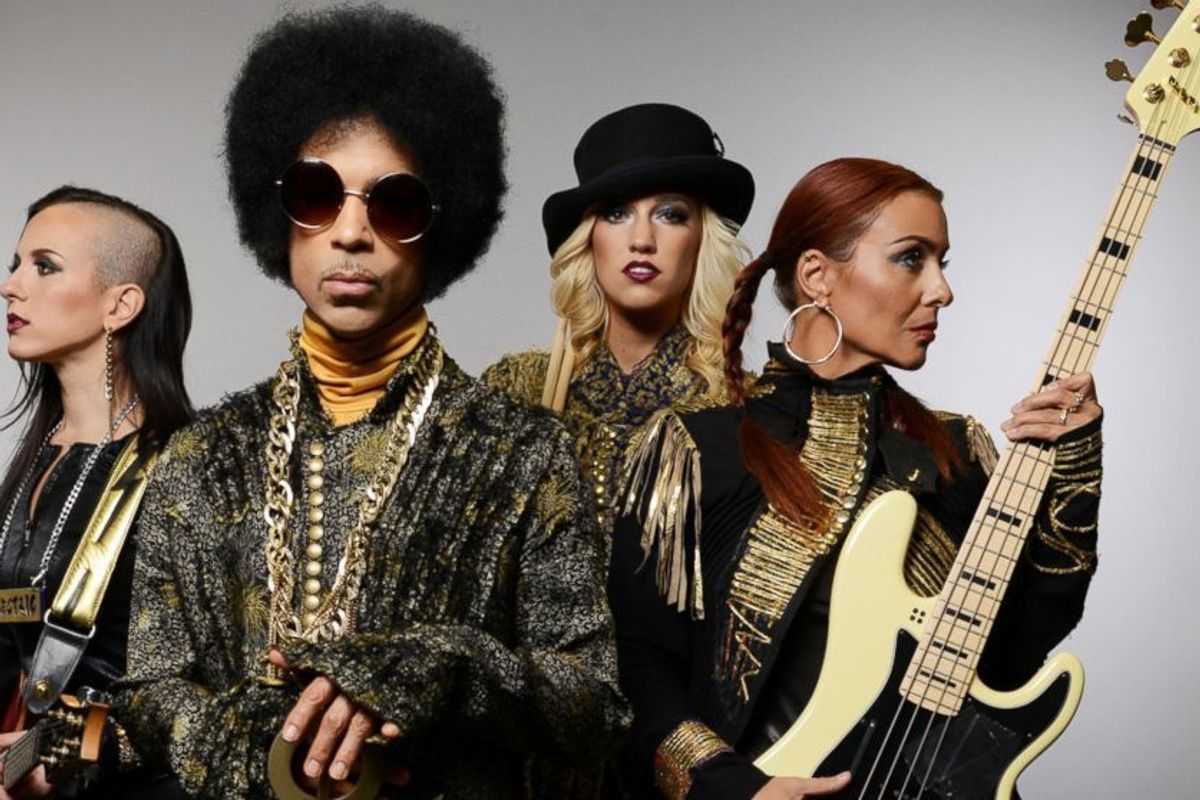 The Women of the Revolution

Prince's mark on pop culture has been felt more and more deeply in the past 24 hour since his tragic death, with an outpouring of grief from the millions he captivated and influenced with his incredible abilities as a musician. Prince embraced his femininity and masculinity simultaneously -- like David Bowie, reflecting "gender queer" before the term was coined -- and embodying a sexual fluidity that he proudly highlighted instead of tamping it down. Prince was also bolstered live and on his albums by many female collaborators, and he championed female musicians and artistry in a way that was rare in the '80s and '90s. These women weren't the decade's usual cynical Robert Palmer drone models listlessly playing unplugged guitars, or back-up singers relegated to the shadows on the side stage, not to be seen. Prince's bands, the Revolution, New Power Generation, and 3RDEYEGIRL almost always featured women who were making lots of noise. Women playing the drums -- Sheila E. got her start with Prince -- women shredding, women fucking rocking. Prince had them on stage with him not as sexy props, but as collaborators, helping several of them, like Vanity 6 and Sheena Easton, launch their own careers.


While Prince is no longer with us, his ability to use his talent and power to promote talented women is a lesson the music community should continue to embrace.

As we remember the Purple One, we also salute the women who tore it up live and in the studio with him and made him all the more funkier.

Sheila E., aka Sheila Escovedo, had a long musical relationship with Prince. They met at a concert Sheila E. was performing at in 1978 with her father. Prince declared she'd someday join his band, and she later did, collaborating with him on Purple Rain, providing vocals on "Let's Go Crazy" and "Purple Rain," and drumming on tour with New Power Generation. Escovedo had a fruitful partnership with Prince, but she also did her own thing, spectacularly, gifting us with '80s power anthem "Glamorous Life." She continues to tour and rock.

Back in 1988, Prince invited singer and saxophonist Candy Dulfer on stage to perform with him at one of his concerts. One year later, she'd star in his video for "Partyman," which would help put her on the map. The daughter of musician Hans Dulfer, Candy performed with Van Morrison, Dave Stewart, Alan Parsons and Pink Floyd, in addition to Prince.

A composer and musician with her roots in gospel, Cassandra O'Neal is an accomplished keyboard player who has recorded and toured with everyone from Mary J Blige and Jay Z to 98 Degrees. She's also co-written songs for Macy Gray and played on the Dreamgirls soundtrack. O'Neal toured with the New Power Generation on the 20Ten Tour and Welcome 2 America tours.

Gaines was first in a family group called Unity, but her vocal talents led her into sing a demo for The Pointer Sisters. Prince met her during that recording session and asked her to be a member of The New Power Generation. In 1990, Gaines became the new vocalist and keyboardist on his Nude tour.

Wendy Melvoin and Lisa Coleman were key members of the Revolution, providing guitars and keys respectively, to several early Prince projects, including Purple Rain. Eventually they'd find success on their own, releasing their debut album in 1987 and writing songs for an incredible range of artists from Madonna to Pearl Jam to Liz Phair to Grace Jones to Seal--we could list these all day.


Prince's '00s backing band, 3rdEyeGirl, continued his tradition of working with women who could really shred. Danish bassist Nielsen blended her funky lines to the band from 2010 on. Here's a video of her dropping some sweet riffs. You don't get nicknames like Bassida and Ida Funkhouser for nothing.

An accomplished session musician with roots in jazz and blues, Grantis joined up with 3rdEyeGirl in 2010 and backed Prince on guitar on tour. She's a master of the jam session, boasting the technical chops to rock a constellation of effects and pedals during their sets and match one of the guitar's greatest talents.