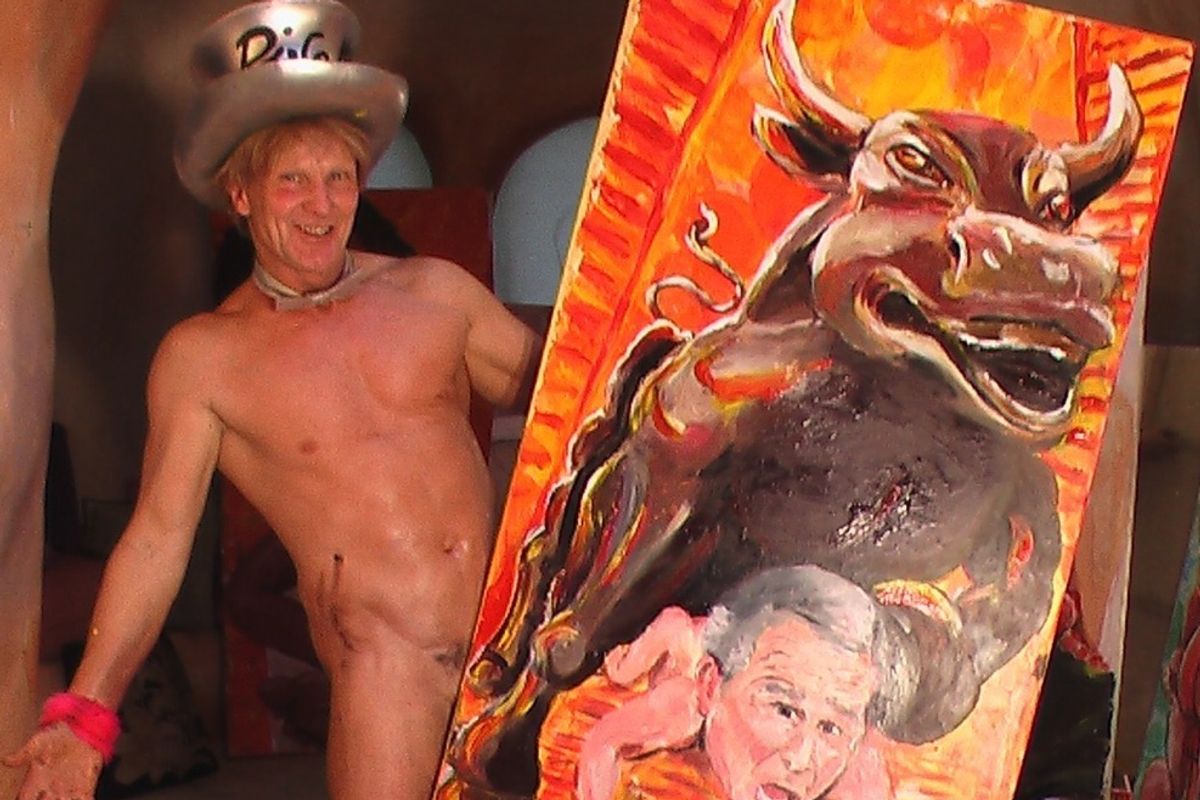 Forget the paintbrush, because Australia's new art world darling is none other than a man who paints portraits with his penis.

Aptly dubbed Pricasso, Tim Patch is a 66-year-old artist who hails from Queensland, Australia and performs regularly at, well, whatever function you hire him to paint at. Typically tackling pop cultural and world news trends with a satirical bent, you can also get him to create portraits of you and your friends for about the same amount it costs to hire a stripper -- though honestly who wouldn't love a dick-painted Dubya for the wall?

Speaking of conversation starters, we talked to the talented man himself about everything from his technique to his subject matter to his artistic inspirations, getting quite the eyeful during the research process as well. Read our relatively safe-for-work Q&A below.

How'd you come up with the idea of painting with your penis?

The idea came to me while watching puppetry of the penis many years ago. I was a builder at the time, but have always been able to draw well. So after I got divorced for the second time I tried [painting with my penis] and realized it would be possible with a lot of practice. I also Googled it and could not find anything, so I made a plan to become the world's first portrait penis artist. It took a couple of years until [adult entertainment expo] Sexpo wanted me to be part of their show, but they have contracted me [to do paintings] ever since.

When did you first start doing this in front of other people?

In 2003 I practiced at home a lot and slowly got better, but could never envision myself performing in public until a friend who I confided in invited me to joined her bondage club. [There] I practiced painting every weekend [and] I really was the most normal person in the room. [I] got very used to being naked and occasionally joining in the play times. It was a memorable time and without it I never would've gotten the confidence [otherwise].

Where do you get your inspiration for subjects?

Anything is paintable, but I am really busy painting orders, which come in via the internet so I don't have much time for creating a body of work for an exhibition. I do love following the world news and putting my mind to [satirizing] any situation with a sexual twist to analyze the truth.

What are the technical aspects of your craft? Like do you have to be hard to paint?

How do you prep a painting?

It takes a while to get ready to paint, as I like to paint in character. Pink, tanned and tidy. The canvas has to be really smooth and I make my own paints, which are also more slippery than normal.

Do you have art assistants? What do their tasks consist of?

No, I do it all by myself. I don't really make that much money to employ anyone. Although I have thought of it and it could be very funny, but I would have to find the right person to start at the bottom and work their way up...Haha.

You paint live for audiences too, right? When you were first starting out was there any embarrassment or shame attached to your work?

When I first started, it was a way of getting out and meeting people -- but after a few parties [where it] went really well I realized that I would have [to be able to] paint faster and better than most artists could with a brush [in order to] be taken seriously, so it took a couple years of practice. Now I paint all day at Sexpo; portraits in 15 minutes...And as for being ashamed, I am not ashamed of my body and admire the Greek and Roman sculptures of old. I love my job and there is not much I wouldn't do in the name of art. I also paint with my testicles, dipping them in a pot of paint and filling in large areas. I paint the edges of the canvas using my bum crack first slapping paint between the butt cheeks and then sliding the painting in between -- I call it the credit card swipe. Makes everyone laugh .

What's the most difficult aspect of painting with your penis? Have you ever experienced any "accidents" mid-painting?

I am looking down at the canvas at a very steep angle, so if I painted what I see, it would come out very long and thin...so I have to convert in my head the distances between parts of the face. Also the friction of skin on the canvas [can be hard. It] has to be ultra smooth and the penis head has to be lubricated well all the time/

I paint about one thousand portraits a year, so can't remember but I do love painting older people and bringing out their character.

I noticed you have a "Pricasso hat" that you always wear as well, where'd you get that? Why the (for lack of a better word) outfit?

It's my alter ego. I guess I can paint naked, but putting a cartoonish spin on it makes for a lighter, comical performance. Not everyone wants to see a naked man holding his penis, but to make a bit of a joke out of it is always better at a party. Usually after about 5 minutes everyone says it looks quite normal and they are just interested and watching the picture take shape.