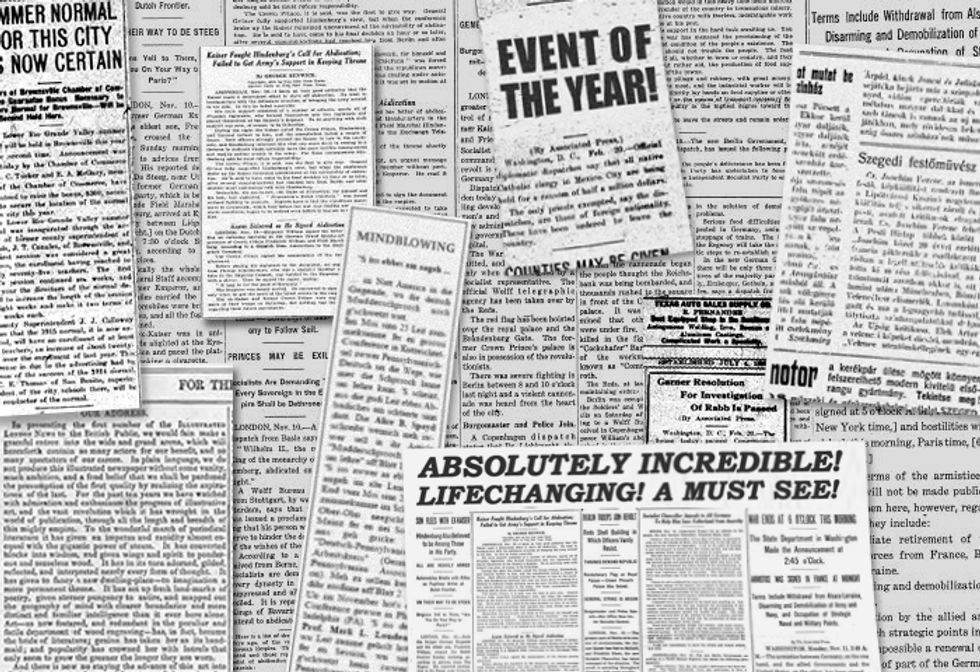 Prepare For Some Ooze: Here Are the Gushiest Raves Ever Written

by Michael Musto
PAPERMAG
Critical enthusiasm over a movie is fun to witness, until it spills over into frighteningly hyperbolic gushing that requires a massive cleanup afterwards. Here are some of the most elaborate raves in history, napkins not included.

"The film, only very loosely based on the early Chekhov play Platonov, is perhaps even closer to Chekhov than Chekhov was." -- Janet Maslin's New York Times review of Unfinished Piece For a Player Piano (1977)

"The finale -- a parody of Antonioni's apocalyptic vision at the close of Zabriskie Point -- is the greatest finish for any villain ever. One can imagine Welles, Peckinpah, Scorsese, and Spielberg still stunned, bowing to the ground, choking with laughter." -- Pauline Kael's review of Brian De Palma's The Fury (1978)

"Hollow Man is one hell of a scary ride." -- David Manning of the Ridgefield Press (2000) (The problem is, no such person existed! Sony completely made up the critic in order to get a good quote! When busted, they had to pay various damages and maybe even start trying to make better movies. Meanwhile, a real critic, Leonard Maltin, said Hollow Man starts out fun, but "turns nasty and stupid." That sounds more realistic than his Who's Minding The Mint? review.)

"It's impossible not to fall in love with Mistress America." -- New York Daily News (Well, impossible things are happening every day -- like the day I saw the film and found it labored and blah. And I usually love Greta Gerwig and Noah Baumbach!)

All reviews of Two Days, One Night

"The jaw dropping, eye popping, heart stopping epic we've been waiting for all year. Stupendously entertaining. What you will see will spin your head six ways from Sunday. Jackson, a wizard to rival Gandalf and the lord of mythic filmmaking, ends 2005 on a note of pure exhilaration" -- Peter Travers' Rolling Stone review of King Kong

"Excellent! The most charming and wonderful movie you'll see all year." -- Shawn Edwards' Fox4 News (in Kansas City) review of The Sisterhood of the Traveling Pants

"Suspenseful! This is suspense like Hitchcock used to make." -- Jim Ferguson's KGUN-TV review of Derailed

"As hilarious as it is action packed." -- Paul Fischer on Kung Fu Hustle

"It's out of control action and laughs." -- Good Day Sacramento's Mark S. Allen's review of The Dukes of Hazzard

"Thrilling. Smart. Sexy. Chilling, engaging. You'll be feeling this film long after you leave the theater." -- Mark S. Allen, The X Files: I Want to Believe

Let me end with an array of blurbs from renowned quote whore Earl Dittman (owner of Wireless magazines), who never met a piece of crap he didn't like. Among his most renowned utterances:

"Soon to take its place as one of this generation's most hilarious, smart and entertaining family classics" -- review of Racing Stripes

"Hilarious! Wonderfully witty. A comedy for the child in all of us." -- review of Son of the Mask

"Spectacular! An eye popping, action-packed masterpiece!" -- re The Adventures of Sharkboy & Lavagirl in 3-D

"A heart stopping, edge of your seat thriller. Jessica Alba gives a knockout performance." -- Into the Blue

"The scariest movie of the year!" -- Pulse
You May Also Like
Famous People