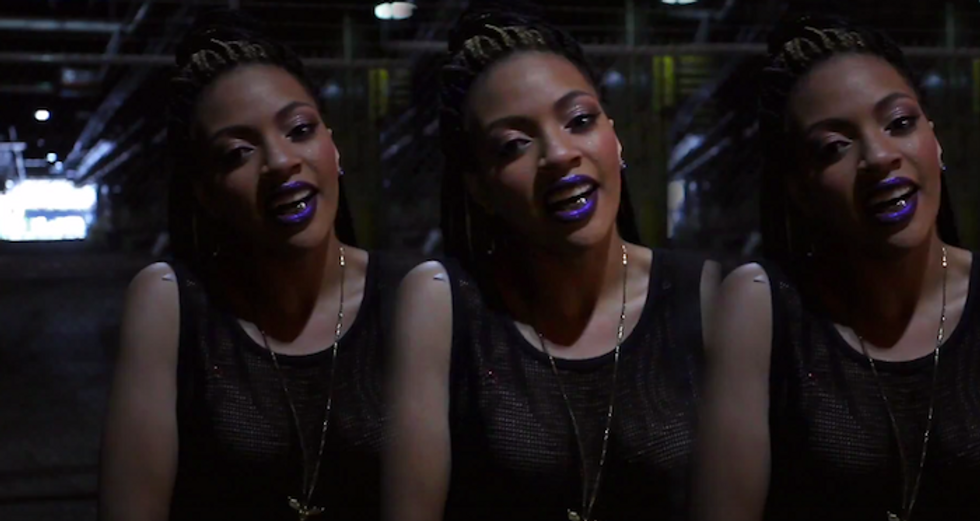 Premiere: Watch the Slick Video For MoBo The Great's "Pimparachi"

by Sandra Song
PAPERMAG
MoBo The Great (aka Monique Burrell) is a force to be reckoned with -- the rising Chicago rapper spits pure fire, and her recent Fuck The Public project is verifiable proof of that.
And we've got the premiere of the music video for her single "Pimparachi," which puts her sharp wordplay and unapologetic braggadacio to the forefront. All coupled with a horn hook that's approaching Donnie Trumpet Surf-levels of swank, it's no wonder she performed at Jay Z's concert twice -- and apparently even got Timbaland vibing to her verse.
Get to know her a little better with our Q&A below.
Tell me a little bit about your Fuck the Public project?
It was something I came up with when I first started getting on the music scene. I was trying to break my way into the scene by getting on blogs, but in Chicago it's very divided. And like if you don't have a coastline, or if you're not a part of SAVEMONEY or something like that, it's very hard to break in. I almost felt like since nobody's fucking with me, well then fuck everyone, and then over time it just became something much deeper -- it just became a way of living. You know in society, they set so many standards about if you're a woman and you're a rapper, you're expected to dress like Lil Kim or you're expected to rap like Nicki Minaj. Society sets all these double standards, so it just became something different. It went from fuck everyone to just fuck society and just do what you want to do and stand for what you believe in.

On that note, does the double/physical standard you were talking about play into the way you choose to dress or present yourself?
When I first got on the scene, I was really into streetwear. Like my fashion idols are mostly men, but Teyana Taylor was one of my [icons], so that was where I get a lot of my fashion from. But...now, I just try to find a way to balance everything. You know I want to stay true to myself, but you know I am a 21-year-old woman so I want to dress my age and things of that nature as well. It's all about balance.
You have something very unapologetic and triumphant about your entire EP, what spurred this?
It's just me. I'm an Aries, and Aries are just feisty leaders, so that's just who I am as a person. My project was actually done three years ago, but after I got onstage with Jay Z last year, I completely scratched that project. Then I brought in all amazing producers, I brought in BJ The Chicago Kid and Katie Got Bandz, and we basically constructed an album.
Let's talk about Jay-Z for a second. You performed at his concert? How did that happen?
Well the first time was in 2010 at the Blueprint 3 tour. My grandma bought me a ticket to the concert and I remember I was sitting in the 300 aisle...So I just remembered sitting there and I was just like, "Man, one day that's going to be me on that stage," and literally right after I said that I felt like this indescribable energy and it was just like move, move. So I left the 300 section and went down around the United Center to the side seats -- and Jay always does this intermission where he points out what you're wearing. At the time, I was wearing this blue Florida Marlins hat and he was just like, "You want me to sign your hat?" and like "Do you want a hug?" and I was like, this shit is so fake right now -- but I was like "Hell yeah, I want a hug." And I was like, "I want to be a rapper just like you." And he was like "You want to be a rapper?" and in his New York accent he's like, "Alright, go ahead, spit some shit then, but don't take over my whole show."...The second time, him and Kanye came back for Watch The Throne and that's how he gave me his hat. Like I was sitting front row and he just took his hat off and gave it to me. I don't know, I feel like we had this weird special connection.
me>
What else happened the second time?
He didn't call me up on stage, but I was like if I get a sign I feel like this can happen again -- like anything that happens once can happen again. It was just a matter of me getting his attention...So he saw the sign and he's like, "I can't read the whole thing, give it to me"...and I'm like front row so I hand him the sign and he's reading it like, "You were sixteen? Well shit, let's keep it going then." And I hopped on stage so fucking fast and I killed it because I had like three years to really think. The first time because I didn't know it was going to happen, so like this time I made sure to look him in the eyes and get the crowd participation and I did it the right way, so it turned out amazing. And Timbaland was on stage the whole time too, he was a DJ that night -- and he was like backstage pumping his fist.