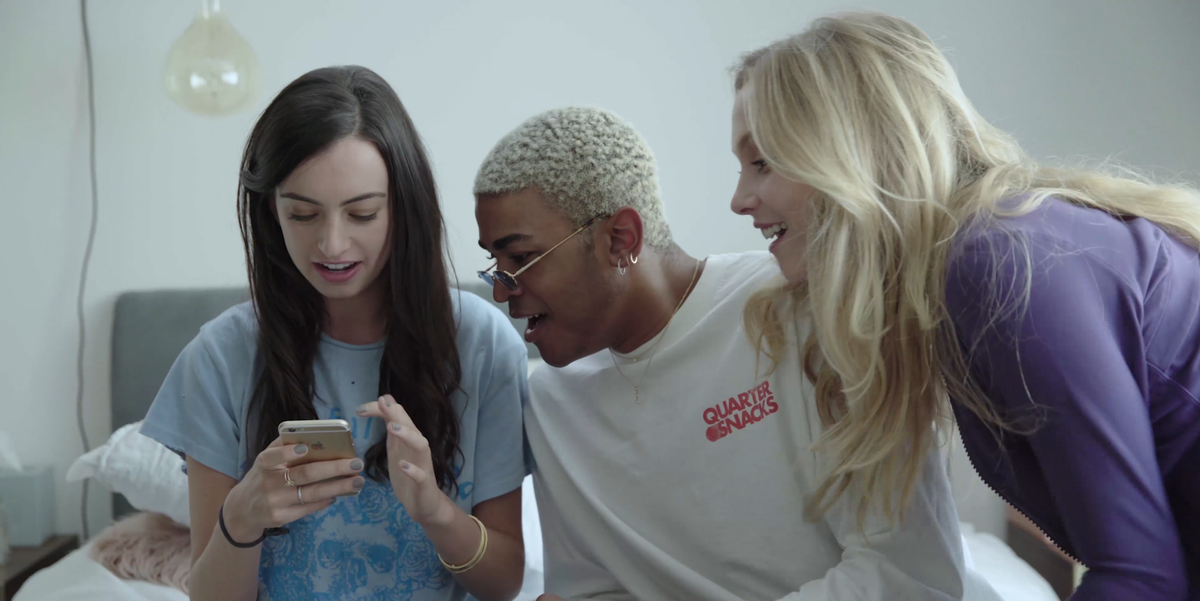 You might have heard of Cazzie David, and if not you've certainly heard of her web series, "Eighty-Sixed." Co-created and -written by David and Elisa Kalani, the series explores the way modern millennials connect (and don't) on social media and IRL. Via Los Angelenos Remi (played by David) and her friends Owen and Lily, the series examines everything from Instagram stalking faux pas to solidarity ice cream to ever feeling more than 72 with incisive, hilarious specificity that hits home--and hard. PAPER is premiering the final two episodes of the web series, which feature infinitely relatable stresses about cats, secret accounts, and texting a new fling. Watch above, then dip down to read our Q&A with David.

How did you end up settling on a YouTube series for Eighty-Sixed? Had you considered trying to make a more traditional TV show?

Yes, I would have loved that! Unfortunately, they don't really just hand out television shows. We wanted to film something we wrote, and as great as it would have been for someone else to produce it, the only way to ensure that it would happen and actually get made was to do it ourselves.

How do you and Elisa Kalani work out what topics you want the shorts to focus on? Did you know from the start that the way we interact (with friends, dates, strangers) online and in life would be a key theme?

I think we both try to stay true to our own experiences from our short lived lives. One thing we don't try to do is write things that feel out of our element. Something we do know about is how much social media affects young people's relationships and headspace. We hadn't seen any online interactions being used to their full comedic potential in TV or film, so we knew we wanted that to play a major role in the show.

Episode 8 features a (very familiar, honestly) freak-out about what to text to a possible date. Do you think texting/the ease of communication has changed how we date (or were people doing the same thing before leaving voicemails in the past)?

I have no idea what it was like "back in the day" (i.e. fifteen years ago), but I assume texting has changed dating dramatically -- probably for the worse. It's safe to say dating has always come with the usual insecurities, but since so many relationships now start with all of your communication being done over text, it puts a lot of weight on every word that's sent. You basically get to know the personality of the person you're seeing from how they text you, so if you're extremely neurotic it can make every sentence, word, or punctuation mark feel over analyzed and over dramatized. I think it's funny to see someone try and navigate that.

Have any of the series' situations been inspired by your or Elisa's own lives (like creating a fake account to Insta stalk)?

Yes, unfortunately, pretty much all of the social media mishaps have happened to me in one way or another. As for the fake accounts, Elisa has a "finsta," which I refuse to follow because I despise the concept. If you don't know what a finsta (fake insta) is I'm jealous, but it's used to post things that aren't good enough for your regular Instagram. I don't understand that at all--just have some will power and don't post it, the world doesn't need it. My personal fake account has mainly been used to report celebrity photos that I feel are getting too much attention. Or to report photos that have captions that are too unbearable to go unpunished. I'm a reporter. My social media mishaps are probably all karma from reporting.

Are you as neurotic about your own social media presence/persona as Remi? Do you have a favorite/preferred platform?

I wouldn't say I'm as neurotic as Remi but I'm more neurotic than I'd like to be considering all of the very real things there are to be thinking about. Instagram is the only platform I use so I guess that's my favorite by default.

This was the season finale—what's in the future/the next step for Eighty-Sixed?

As for the future of Eighty-Sixed - we don't know. We considered and wrote this to be the series finale as a whole, but maybe the world will throw me some more social media disasters that I'll feel inclined to put Remi through.