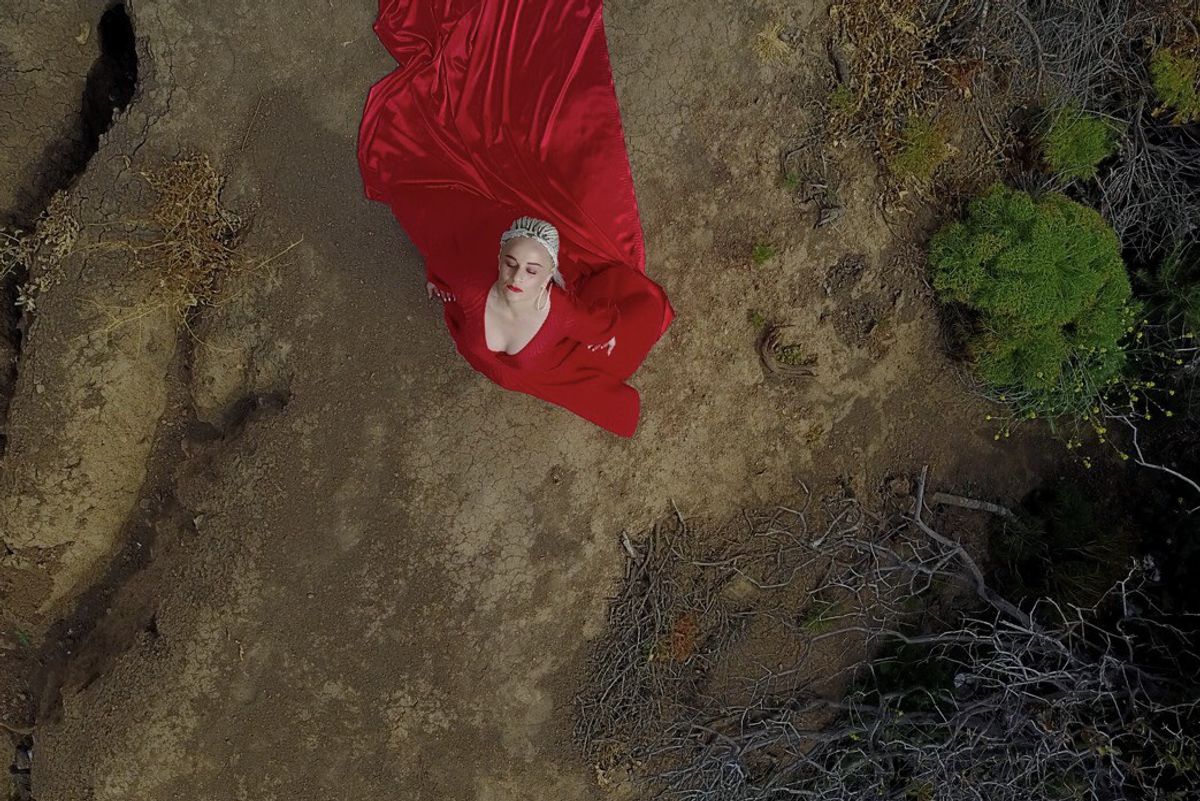 PREMIERE: Sarah Hudson's Short Film for 'Songs from the Sea' Is a Mesmerizing Odyssey

For the past few years, Sarah Hudson has made a name for herself in the music industry by adding to the legacy of other artists. Having written for some of the biggest pop stars on some of the biggest singles of the last few years — think, Katy Perry's "Swish Swish" or "Dark Horse," Nicki Minaj's "Get On Your Knees," and Justin Bieber's "The Feeling" — Hudson has proven that she's more than capable of crafting a hit for others. Now, she's ready to strike it out on her own.

"I focused heavily on the songwriting for the past few years," she says of the time. "So I felt like it was time to put a little piece of me out into the universe." That little piece came in the package of Songs from the Sea, a 6-track EP Hudson self-released in March. Today, we are premiering the EP's accompanying short film of the same name. Describing the work as a projection of "what swirls around in my psychedelic dreamland crazy mind," the project is a seven and a half minute odyssey through the sea, the forest, and the mountains. Going from soft and delicate to dark and ominous in the blink of an eye, there's truly nothing else like it. After all, as Hudson describes it, "my poetry, nobody else's."

Watch the mesmerizing short film now and read on for a short Q&A about how it came to be.

What made you want to release a short film for multiple songs rather than one video for one single?

This EP is a story for me. I didn't really set out to make "singles" or try to make a "radio hit." I wanted to make an artistic, cohesive collection of songs that embodied my essence at the time, and I could really only imagine a short film for it to try and capture the EP as a whole.

Where was the video filmed? How did you find this place?

We filmed the video in two different locations that my goddess of a director found. The first was at a magical house in the Pacific Palisades; it was actually Bruce Springsteen's old house, which is pretty lit. We did a lot of the outdoor forest scenes there and the underwater scenes. The second location was deep in the hills and cliffs of Malibu. The gorgeous flower fields, the ocean scenes, and the incredible tree for "Black Crow" were all shot in Malibu.

Each song is connected to a magical element. For example, "Mermaid" is water, "Black Crow" is air, "Voices" is fire, "Gypsy Girl" is goddess mother nature, "Love Me This Way" is spirit, and "Wildflowers" is earth. So it was essential for me to be connected to nature while filming it.

What was it like working with director Liza Voloshin?

Liza is a visionary who is so connected to feminine, feline, power energy. I saw some of her work and I just knew that she was the only person that could execute this video for me. She understands the female body and spirit and the ethereal nature of a goddess. During the process of filming, she was so strong in her vision, direction, and execution, but also allowed me to have my creative freedom. So, in three simple words…it was dreamy.

There is a clear aquatic theme that guides this short film. The name of your EP, "Songs from the Sea," also has an aquatic theme. What is behind that name/theme in your work?

Well I have been told (and just know in my being) that I had a past life as a mermaid in Atlantis. I feel so free in the ocean but also so in awe. The ocean embodies such power and strength, but also is the most cleansing, pure, and peaceful place. The songs are about my journeys in love, addiction, self-doubt, self-love, fear of death, joy of life, and my aesthetic as a woman and creator. To me, the ocean is one of the only places that I feel at home. So, "Songs from the Sea" is like saying songs from my heart, my home, and the purest place I know.

In the video, it goes from bright (in the sea) to dark and gothic then back to colorful again. Do you like the interplay between these two aesthetics?

Yes, and this was so important for me to convey. I am a complex creative being and with that comes a lot of light and just as much darkness. I have been in so many low, dark places in my life and that has enabled me to experience extreme light and joy. We need all of the elements to exist…they all work together so beautifully and I really wanted the film to express that.

The short film obviously spotlights multiple songs. Like the aforementioned aesthetics, the sounds are also varied from slow and ethereal to upbeat and club-ready. Do you like to switch up your sound frequently?

I have two distinct sides to me: one being a spiritual, earth mother, hippie goddess, and the other, a grimy, bold, dancefloor, hustler queen. This EP definitely leans more to the spiritual aspect of my personality — but I was in an electro-club-pop band for a defining part of my life and I have such a love for dance music, so I wanted to allude to that part of my soul. The next incarnation of my music is definitely gonna be more in the style of "Voices" [though]. I'm ready to go back to the club now.