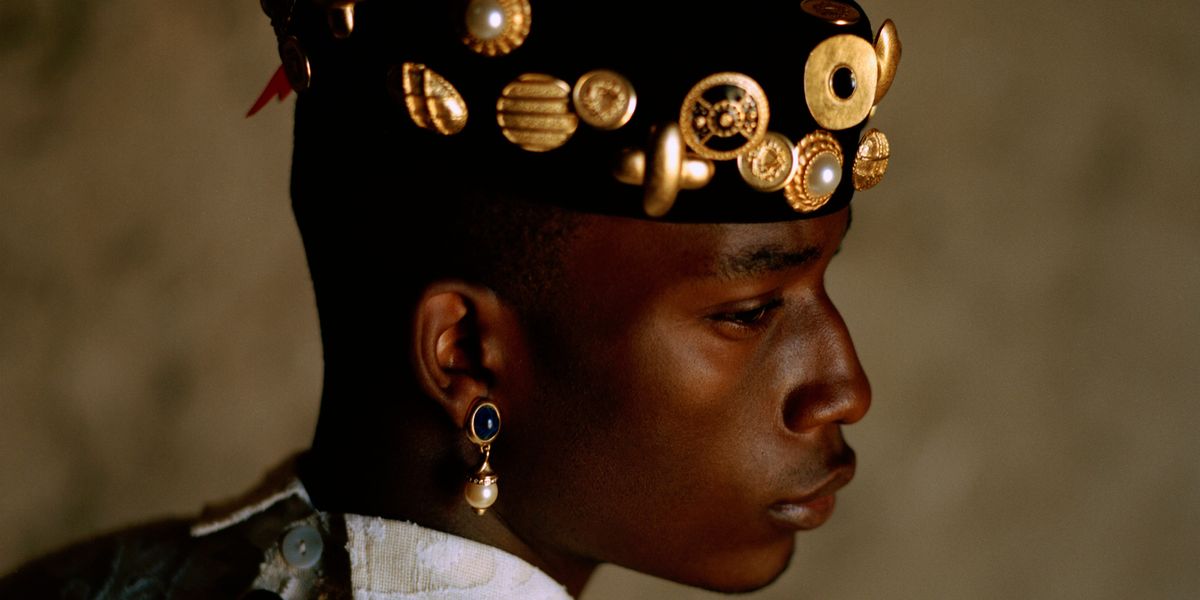 PREMIERE: Kenneth Nicholson's Lookbook for 'The Romantics and The Rebels' Is an Ode to African Regality

Since first launching his namesake brand last year, Kenneth Nicholson, a Los Angeles-based designer has already produced three different collections. For his SS16 outing, the designer's first, Nicholson produced basics with an unexpected twist: a pair of khaki-colored pants came majorly flared while a plain white button-down prominently featured waist-grazing pockets. And looking at his following two collections, one can easily mark the ways in which the designer was working to expand his brand's selection—AW16 threw patterns and bright colors into the mix, while SS17 saw the introduction of denim and slightly more daring silhouettes. Now, for AW17, which we are unveiling exclusively on PAPER today, Nicholson is ready to take the next step.

"I want [my brand] to have more options," Nicholson tells me from his adopted home in Los Angeles. It's the one thing he seems most sure of as he tries to put his vision for the collection into words. "I felt like I needed more of a visual vocabulary. So that was kind of the beginning point." It's a completely understandable place for him to be, especially since the designer, who runs the label independently, has watched his brand grow seemingly overnight (he recently had a pair of his SS17 "Maritime Shorts" grace the cover of Cool America Magazine). To achieve his goals, this time around he's doubled down on innovation even more than before. Where his first collection could have fooled someone into thinking Nicholson is a minimalist, his AW17 selection is quite the opposite. With tailored suiting, outerwear coats, and peplums all coming heavily adorned, it's safe to say that the Kenneth Nicholson man is never going to be content with standing in the background.

The lookbook, which was shot entirely in film by photographer Milan Zrnic, was lensed in an abandoned part of L.A.'s Griffith Park—the perfect backdrop for the collection's theme: "The Romantics and the Rebels." Speaking on his location choice, Nicholson told me he was drawn to the space's somewhat contradictory surroundings. "It had a really unique quality," he recalls. "It had this mix of nature but also these manmade structures." While conceptualizing the shoot, Nicholson says he was "thinking about warriors, regality, and princes," but also wanted to "move and adapt our story to an African context." And to his credit, it's hard not to see these influences in the resulting imagery. In addition to using a host of luxurious materials (lace, wool, suede), the designer also topped a few of the looks off with headwear worthy of a royal wedding. Mix all that in with the plethora of beautiful vintage jewelry Nicholson sourced to add to his vision, and it's fairly easy to imagine any of these models taking an Uber home (as long as that home just happens to be a castle).

Check out Kenneth Nicholson's beautiful AW17 lookbook below and read on to find out how Angela Davis inspired his work (her picture is stitched onto the back of a particularly eye-catching cheetah print denim vest), what the significance is in his model casting, and why he's working to present Black beauty as just...beauty, "full stop."

What was the inspiration behind this collection?

Coming off the completion of my last collection, I was still in a place of wanting to continue the growth of what I'm trying to say [with the Kenneth Nicholson brand]. I want the line, over all, to have a variety of silhouettes. I want it to have more options. I don't want it to feel scattered, though—I still want it to feel very focused in terms of what the main statement behind the brand is—but I felt like I needed more of a visual vocabulary. So that was kind of the beginning point. From there, that took me to wanting to tell a story about a romantic guy that's also still a little rough around the edges. I dubbed this collection "The Romantics and the Rebels."

What is the main statement behind your brand?

The mission statement, in my head, is to expand the narrative of menswear. Personally, I want to build a language with clothing that calls for emoting. When men dress in the line, I want it to be an extension of what they're feeling. I'm very big on emotion—I've always considered myself an artist first—so when I'm in my creative space, I tend to take the lead based on the emotion that I want to convey. In this particular collection, it was really about wanting to convey that romantic and regal vibe. But I'm also really big on contrasts—that's very important to me. So, on the flip side of that, it has a variety but it is still single file in terms of everything consistently working towards the same vision.

When I think about designers like Alexander McQueen, he had the ability to do something that was so over-the-top one season and so reserved the next but it still felt like his thing. That's a very difficult thing to master, but I'm always up for the challenge. I want the right to have a wide artistic vocabulary.

What was on your mood board for this collection?

With this collection, I cited Angela Davis. The reason I was into her was because when we think about "rebels" and "punks," we don't necessarily think about Angela Davis in that context. But when we think about what the punk movement represented, it was very much a rebellious thing. So I like to cite Black intellectuals because it challenges the notion of who gets to be the custodian of what it is that their community creates. So, why can't we see Davis in that light? When I think about the lineage of what African-Americans have contributed to American society—you know, country music, pop music, rap music, soul music—these are all things that are sort of in the African creative lineage. So, in part, it was also about a reclaiming, in a way—just sort of injecting that into our new social space.

I've noticed that you strictly use Black models for your lookbooks. Is this a deliberate decision?

I do think my models are unapologetically Black, but I don't want to necessarily say that at the expense of that becoming a thing. By making it a thing, it's sort of…I don't know. I don't want to perpetuate this as some other kind of beauty. [Black beauty] is a beauty, and I want to engage diversity to say that factually. I want to approach it as a fact, not as a novelty. These are attractive people, full stop. I feel that by approaching it that way, we, as Black creators, get off the defensive to "make a case." I don't want to have to explain to the public why I'm doing this. They should be questioning themselves, like, why can't he do this? Why shouldn't he do this? Because that's really what the conversation is about.

Whether or not it is a thing, there is something powerful in your decision to use Black men as your subjects—especially since your designs challenge the notions of "typical" male dress. Have you thought about how your imagery can help to dismantle the hypermasculine stereotype that's commonly associated with Black men?

When I think about placing these sorts of garments on the Black male body, I really want to approach it as a factual thing. A lot of the time, I'm taking inspiration from my own interests and my own life. When I think about it, specifically in this collection, I'm imagining ancestry—again, it's about a reclaiming of who historically gets to be the custodian of this idea, of this image of regality, and who gets to live on this spectrum and experience the full range of human emotion.

For hypermasculinity, it's a very real thing, right? It's in the culture, it's of the culture, and growing up, I was affected by it—and, honestly, not in the best of ways. But at the same time, I think that hypermasculinity and the image that it portrayed, in a way, birthed its own beauty; it birthed its own culture. It wasn't necessarily something that I ascribed to, but I could recognize it. Although it had these problematic moments—and I don't know if it's just me being an optimist or a creative—I still saw the beauty in that.

But on the flipside of that, Black men aren't a monolith. While our cousins were doing the hypermasculine thing, there were people like us doing the emotive thing, the sensitive thing. Like, I have three older sisters and I'm the youngest child and only boy. Plus, my mom is a trained cosmetologist so I grew up always being in hair salons watching my sisters get their hair done. I was just around it and it was something I just picked up on. So now that I'm in a position to create my own work, I'm drawing from a particular perspective that gets told in the media. For Black males, it's usually only violence and hypermasculinity. It's just a very narrow telling and I'm trying to crack that open.