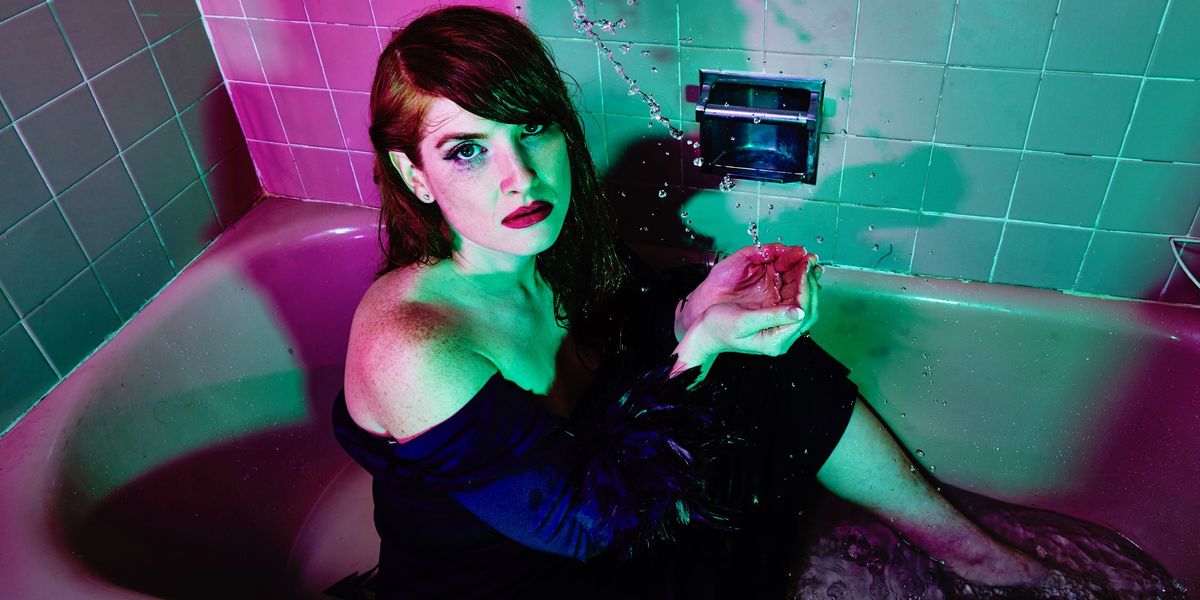 Emmy Wildwood is the Soulful Songstress We've Been Missing

Emmy Wildwood sounds like the lovechild of Kate Bush and Sia— her breezy voice bridges radio-ready pop with '80s synth grooves. The LA-based singer-songwriter, fashion house owner, and Guns N' Roses tribute band founder has a distinct retro vibe that flows from her dreamy sound to her sequined clothes.

Today she shares a new single from her forthcoming sophomore album, All My Blood. "Down Down" is a dramatic, sparkling ballad fit for early MTV. Wildwood explains, "'Down Down" interprets a downward spiral of addiction and self sabotage as coping mechanisms and the inevitable destruction that ensues when we live in denial of our demons."

Listen to "Down Down" from her forthcoming sophomore record, All My Blood , and read our interview with the synth-pop star, below.

Your musical style has gone through some changes, from being in a punk band to a Guns N Roses tribute band, and now with your '80s-inspired solo career. Can you tell us a little bit about this trajectory? Did your stylistic changes coincide with personal changes?

You're right, this record is quite different from previous releases. Though, through the process of making it I have thought of this body of work as a return to my true self rather than as having evolved from punk. I always loved PJ Harvey, Tori Amos and Kate Bush. I always wanted to make records that were dramatic, melodic and sad. I wanted to give songs to girls whose hearts were broken. I wanted to make a series of romantic lullabies like the ones that rocked me through the pain of teenagedom.

I started playing punk because in my hometown, as a teenager, those were the only kinds of bands with kids my age playing live, let alone females. Even at 17 the kids in the scene seemed more evolved then anybody else I knew and I was introduced to activism and feminism. I found a home with the other riot grrrls who were standing up next to shirtless punks on stage. The scene gave me the power to recognize how important it was to play in Guns N' Hoses as well.

Guns N Roses' music was more difficult than anything I had ever played. It was outside of my wheel house but I knew I couldn't miss an opportunity to play in this all-star group so I hit the grindstone and pushed myself to grow and it's one of the best things I ever did. Touring with five women is a gift you can only understand if you've toured in a band as the only woman with four other dudes for weeks at a time. It's just a different kind of comfort level.

Do you think this is an important time for female-identifying and non-binary individuals to be making art and music?

Yes, it's absolutely an important time. It's always been important to me but right now we have the ear of a nation, and the truth is that music is a universal language that everyone speaks. Love and heartbreak are human experiences. What better place to develop compassion and empathy for each other than in our shared human experiences. We are all people just trying to love and be loved in return, aren't we?

What's your craziest story from the road?

I think the craziest touring experience would have to be our 3 day tour in India with Guns N' Hoses. We traveled 33 hours to play a VH1 India concert series in Trichy. We were treated with kid gloves during our travels because they had never had an all female rock act and the promoters worried about backlash. Amazingly, the stadium was packed and when I got on stage I noticed all of my band members looking at each other perplexed. When we looked out into the audience there was a barricade separating the audience into two sections, men on one side and females on the other. The stadium wouldn't allow them to watch the show together as it was considered inappropriate. Backstage after the show, streams of girls came back to tell us how we had empowered them and then were quickly rushed out. We asked where they had gone and they told us that females had a curfew while the boys did not. It was one of the most moving and educational shows of my life.

I love your clothing line. Where do you draw inspiration for these pieces? They feel very retro.

Thank you! I like to think of it as a sort of "Soap Opera Punk" vibe. It is 100% inspired by the '80s and '90s. I was a little kid then and all of the singers, actresses and models that I idolized dressed in a way I was too young to replicate. I think I built a fashion rolodex of looks in my mind based on all of things I was obsessed with but too young to wear. When I get dressed I am forever fulfilling those unrequited fashion opportunities from my youth.

Who is your style idol? Musical idol?

There are many but I can combine my answers to both of these questions by saying: PJ Harvey, Dolly Parton, Crystal Gayle, Goldie Hawn, Jessica Rabbit, all of the 90's super models that had bod, Charlie's Angels, Courtney Love, Old Escada, Cher, 80's gunne sax, Brooke Shields, The Judds, Kate Bush, Wanda Jackson, Liz Phair, Tori Amos and all awards show fashion before 1995.