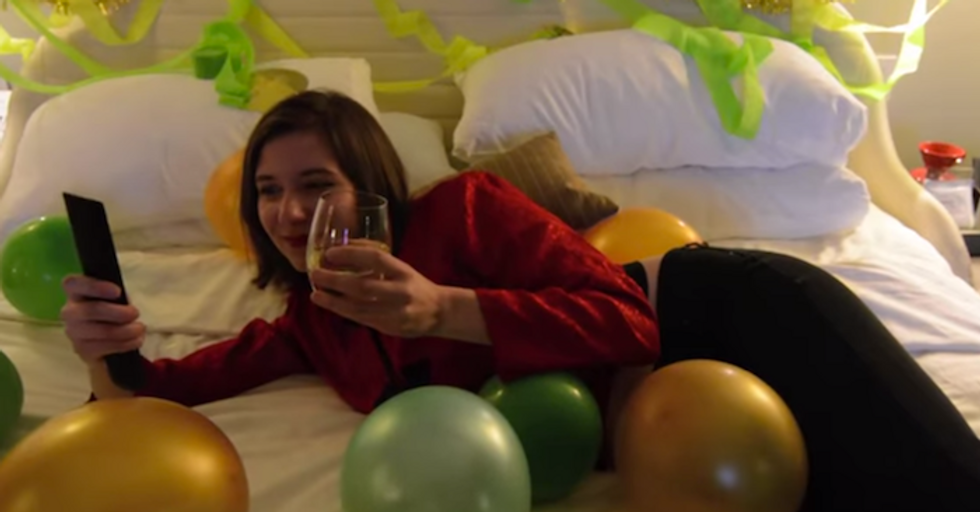 Premiere: Circuit des Yeux & the Power of Friendship on "Fantasize the Scene"

By Sandra Song
PAPERMAG
Circuit des Yeux's Haley Fohr has the kind of lush, cognac-stained baritone that would give Nico a run for her money -- and her latest showcase of said gift is a video for "Fantasize the Scene" that chronicles a whimsical tale of fleeting friends. An irresistible folk-rock gem off of her critically-acclaimed new album In Plain Speech, we caught up briefly with Fohr herself to talk about the efficacy of humor, the idea of loneliness and the power of friendship, no matter how brief. Make friends with her on tour this summer.
Tell me a little about the song itself. What's the context for its writing?
I have spent a lot of time traveling and touring in the last 2 years. I meet and make friends from all over the world. Our physical contact generally lasts only a day, and then I never really know if or how I will ever meet them again. This song is a take on that experience, and the everlasting quality true friendship has, no matter how brief the physicality of it. I find myself really leaning on those experiences when I feel alone touring the road as a solo musician.
There's something very silly about the visuals of the entire video, which is a pretty stark contrast to the drone-esque song structure and rich, contemplative nature of your voice. Why is that?
Although the tone of my voice is dark and rich, the message is actually very uplifting. It's hopeful and positive. It's about thinking back on a great time between two friends during a time of loneliness and considering the possibility of reconnecting. It toys with the idea that you and that friend could conquer the world and do anything! I can't help the way my voice sounds, it's very dark and resonant. But I'm not all serious. I'm actually a pretty lighthearted character in "real life". Humor is an important emotion. In fact I think it is just as important as love, hate, or any other passionate thing a human fields in life.
I love the idea of "being alone" that you explore, but why pair a childlike, carefree attitude to this? Is the idea of loneliness something you'd like to destigmatize or...?
Loneliness is something that we all deal with at some point in our lives. I've had to deal with it recently and it's been a bit difficult. Exaggerating these sort of "shit day" experiences & pairing it with a bit of humor offers a sense of relief & adds a bit of perspective, I'd like to think. Loneliness is fleeting after all.
Let's talk for a second about your voice; are you classically trained? There's something almost operatic about your pronunciation and vibrato.
I took lessons for 10 years, so I yes I am classically trained.  I think a lot of the character of my voice has just recently surfaced through the last 2 years of performing.  I can't really change the way my voice sounds as it is an element of my physical being. There isn't much thought being put towards things like pronunciation & vibrato any more these days.  I like to think of it as a conglomerate of training and subconscious thoughts, leading me to be the singer I am today.
What's your IRL relationship with Whitney Johnson, who plays your fleeting friend?
Whitney is a great friend of mine! She plays viola on my new record, In Plain Speech.  We've gotten to know each other just this past year from playing music together. We like to go out to shows, grab drinks, discuss books, go dancing, you know, we have a great time together.  She also makes music under her own moniker, Matchess.
The ending's surprisingly sad and tender, but a very sudden move away from the direction you were going in before. Why the 360?
It's an ode to the dichotomy of the solitary and universal. Musically, as a coda, it's a snap back to my own reality. I'm traveling the world completely alone, going through unknown doors, but hoping that there will be a future friendship on the other side. Ironically, I'm writing this from a hotel room in Cologne (a city where I know no one). I'm on week 2 of a 3 week solo tour and I do feel this exact feeling in this very moment. In the video, the two strangers becoming friends had to have a blip in their connection because that's the way life goes. Our lives aren't all that different, you know? We all have struggles and those sweet moments of complete understanding with a stranger are sometimes meant to live and die in those short moments of being together. But for me, they resonate and help carry me through times like these. It's hope that I could meet another perfect match, or find someone to relate to. It's 11:15 PM here in Cologne, and I don't speak a lick of German. But perhaps tomorrow I will make another friend and make a few great memories.