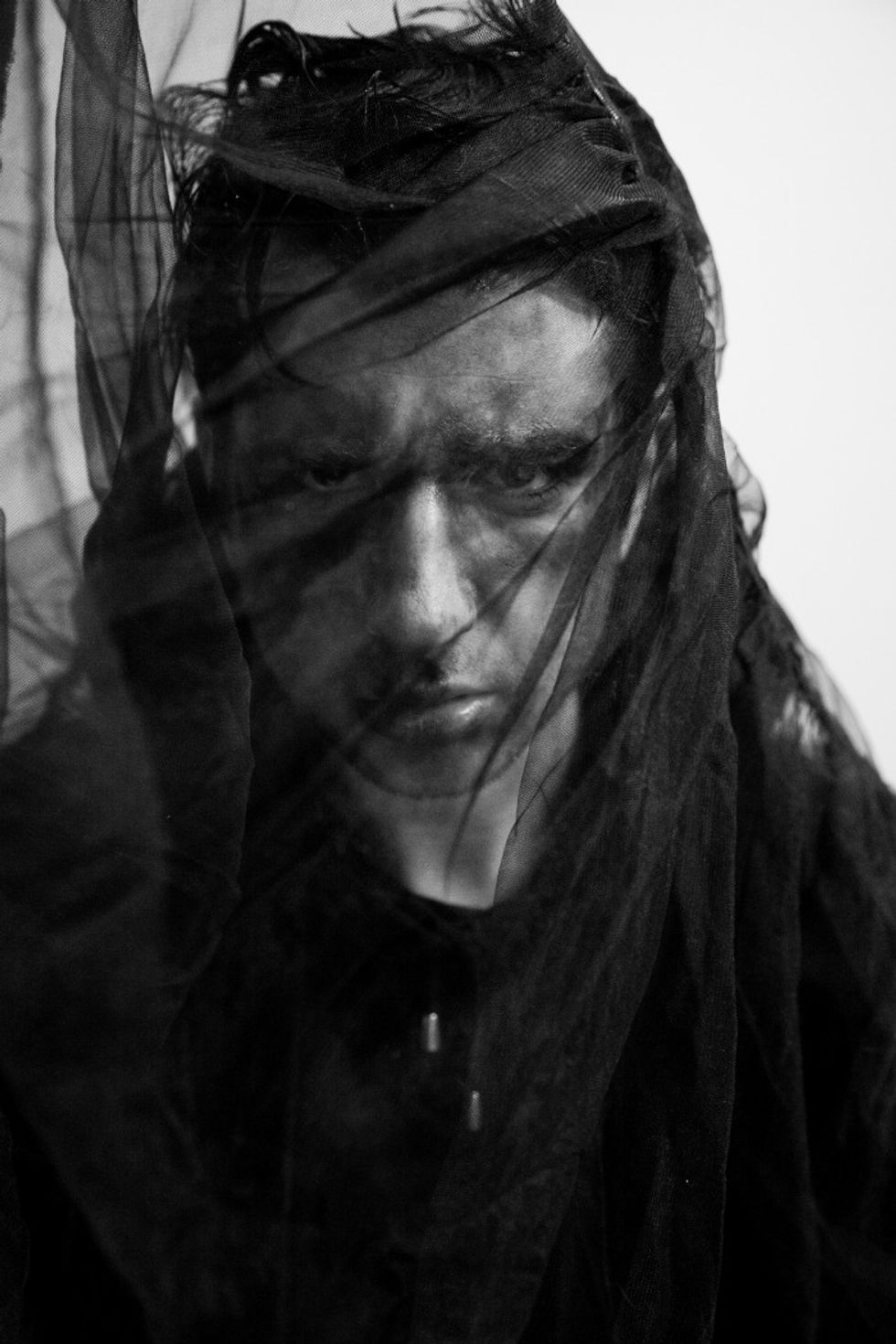 by Sandra Song
PAPERMAG
(Photo by Kaitlin Christy)
Alex Chapman is a man of many talents -- NYC nightlife fixture, journalist and more recently, rising rapper with a brand new "visual LP" or eight videos that accompany each song on his debut, Progress Report. While the album itself has been streaming online the past week, we're excited to be premiering the clips, directed by Tristian Reginato and Andre Bato, on PAPER. Combining editorial-style shots of Chapman along with sourced footage, the videos make you feel like you're in some club kid's dystopic daydream, all the more amplified by Jeremiah Meece's (The-Drum) psyched-out deep R&B production and Different Sleep's introspective touch on the tracks themselves. Watch all eight videos and peep our Q&A with Chapman, below.
So I guess we'll start with the obvious: what drove you to make a video for every single song on this LP?
There's so much music that comes out on the internet, and it all comes out the same way and generally burns out pretty quick. I wanted to do something with the project that we could give it levels and depth, more than just a Soundcloud stream would. I also felt like since this was the most cohesive thing I've done musically, if I could complement it with visuals that also have a defined direction and aesthetic, it would feel like a really full, complete project, and I think that's the result we got.
Each video has an intro with footage of you followed by a collage of spliced videos and images. How did you decide on this specific set-up for each clip?
I was sitting with Andre Bato, who was sort of the creative director on the project, and Tristian Reginato, who created all the sampled videos, and we felt like even though the videos were really engaging on their own that I was getting lost in them. So we decided to break them up with actual footage of me sorta personifying each song in these different looks.
How did you determine which video samples to use? Why all the animated samples?
Tristan has such a knowledge as far as sourcing footage and the overlaying is definitely his style, so I kinda just let him take the reins on the samples. We would come together and I would give feedback and tell him the type of things I saw for each song -- Ghost In A Shell, The Matrix, Blade, stuff like that -- and he would come back with that stuff plus a bunch of amazing footage I never would've thought to use and a lot I'd never seen. I really like the animated element because I think it takes you to another place mentally, and I feel like the LP feels like it's from another dimension in a lot of ways. But not everything is animated
Talk to me a little more about the spoken word intro, which I'm assuming comes courtesy of trans model/PAPER Beautiful Person Hari Nef.
Hari is such a talent all-around. I saw her in Columbia's production of The Seagull and that was the first time I really got to experience her as an actress, delivering lines. I just loved her presence and when it came time to figure out how to start the LP, I knew she would do a great job of capturing the aura. It really sets the tone for the project.
The LP has some pretty sensual and sexually-charged lyrics. What compelled you to go in that direction with your music?
This is the type of music I've always wanted to make, I think it just took me a while to fully realize it. I've been kind of soul-searching with my music up to now, but my heart has always been in writing darker stuff that explores sensuality, that explores those deeper, sexually charged feelings. And I've always loved R&B so that seemed like the perfect context within to shape the LP. The whole thing just felt right.
You have an impressive group of collaborators helping you out. How long did it take you to wrangle everyone and was it difficult?
I am so, so thankful to everyone who's on the project. They are all friends first so it was pretty organic, and the fact that some people are based in Chicago and some in New York is just such a representation of me as a person -- my heart is split between those two cities. It was definitely a challenge getting everything in because all these people are so busy, but everyone was really great and it was definitely worth any waiting that had to be done.
You used to intern at Paper, is it weird coming full circle?
I've had a few of these full circle moments and they are definitely moments I feel proud of. I loved working at Paper. Mickey gave me the opportunity to be a party reporter when I was there and I met a lot of people through doing that, plus it was so fun to be able to go to all these lavish events having just moved to NYC at the time. I feel like New York in general is a full circle experience if you're doing it right.
What's up next for you?
I want to write songs for pop stars. Rihanna is the dream. I really wanted to use this project to show I can write full-out songs, so hopefully it will help in doing that. I definitely want to explore that side of the business over the next couple months. I'm already working on new music so I'm sure I'll have something out this summer. I just want to keep creating, keep growing, keep building. I'm never satisfied so there's always more to do.
Chapman's Progress Report LP is available for free download at mynameischapman.com.
You May Also Like
Famous People