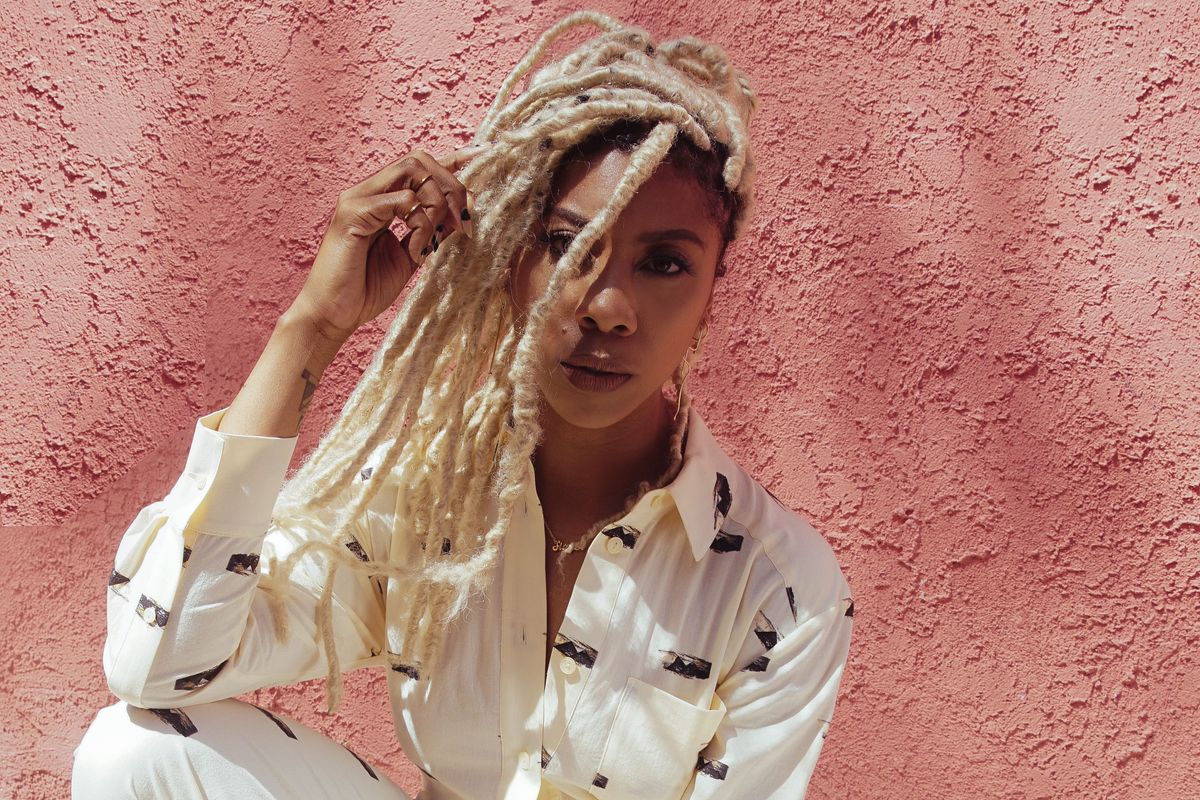 Since 2013, BOSCO has been on the rise in the Atlanta music scene. The Georgia native's affinity for blending art, style (she studied fashion design at the Savannah College of Art and Design), music and crafty choreography brings to mind pop icons like Solange and FKA Twigs. While she's been steadily making music--releasing her EP BOY in 2015 and Girls in the Yard mixtape with Speakerfoxxx last year-- the up-and-comer has her eye on more than music, launching her own creative agency, SLUG, to help empower minority DIY creatives.

Not quite an EP and not quite an album, BOSCO is planning to release her next project, b., August 11. A mixture of diaristic, soulful, alt-R&B tracks, the project sees BOSCO being candid with listeners about her life and the world around her. Premiering below is her '90s-tinged single "Cruel," which was influenced by Bobby Brown. "It was a song that I remember my mom listening to in the '90s, riding in the back of her Honda Civic, so I kinda pull inspiration from that," BOSCO explains.


We caught up with the multi-talented artist about blending the personal and political and the significance of the Atlanta music scene.

We're premiering your song "Cruel" up above. Can you tell me about the track?

Of course. "Cruel" was inspired by Bobby Brown. It was a song that I remember my mom listening to in the '90s, riding in the back of her Honda Civic, so I kinda pull inspiration from that. But I guess the core of the song is realizing what things are and being mature enough to know what it is.

So, is it based on your personal experience?

It's a mixture. It's a little bit of real life, my personal experience; a little bit of other people's journeys and their stories that I've heard and tell the story through different eyes.

Is b. technically a record? How are you presenting it?

Are there going to be more components to this project?

Awesome. How do you feel like you've been pushing the art and music scene in Atlanta? You've really become a defining force in the past few years.

I've lived in Atlanta going on ten years now. And the beautiful thing about living down here is seeing it so open to new ideas. They really wanna push the culture forward, but we can't compete in certain publications as far as New York and LA are concerned. But we have a very, very, very rich, flourishing music scene. So if people want those experiences, they're willing to give you spaces, art galleries, and things like that to really execute your ideas if you explain it to them right.

I've been fortunate enough that people have been wanting to get behind the vision of Atlanta, 'cause we have a lot to say, and I'm very passionate about my city. We might be slower than a lot of people, but we've been able to really cultivate the music world internationally. Think about it: So many people are influenced by Atlanta's culture – whether it's hair, music, or the biking culture that's really, really popular down there. And I think another thing is that we're very community-based. Southern people just really speak with each other, and that's one of our advantages; we're able to come together and support other people's visions wholeheartedly.

That's awesome. Lyrically, this project is more diary-like. Can you speak to that?

I wrote this project between LA, New York, and Atlanta. The center of the piece is evolving and growing in spaces and places while on your journey. I've been on this journey for about two years, and it's funny to look up and realize when you're in your cocoon and you start blossoming. You realize how much you've changed. Just think about it as a woman. We're faced with how many barriers? We have to do things by a certain age and we have to sacrifice so much, whether it's family, life, kids, or all these other things that you wanna get off the ground but you never have time and space to really think about what you are because you're always on a plane, in an Uber or a train. So, I was able to write these songs and really grow with them while growing with myself into this new face of womanhood.

Is there anything extremely political about this record or that plays into how diversity is being challenged in this administration?

I do have a song called "Free" that I touched on, and I feel like this topic is so sensitive and I wanted to make sure that I was saying the right thing. I never wanted to touch on a topic without it really hitting home for me. And with the political climate, I had some things personally happen to me; I have brothers who are racially profiled. I just felt like now was the time to really talk about what is happening, because it really a struck a chord home for me. I'm from Savannah, GA: There's a whole different type of energy that's down there and things that we're facing. I just thought it was the time to really talk about Trump, how Black men are faced with different things on the daily and how young boys have a disadvantage just walking to the store. There are so many things I wanted to bring to light besides sexism, religion, relationships, social media, age, and existing in those parameters. I wanted to write a song that was to my brothers, because it really [hit] home for me.

That makes sense. Did you always want to be a performer and a singer? You first started singing when you were in church. Can you tell me how you got into music?

I always felt that music was something that really chose me. I grew up in a family of singers and musicians. Also I've been around it, and it just kinda happened. I remember that the thing that changed my life was when Michael Jackson's Dangerous album came out – that was during the time where TRL was popular. I saw this video: I think the video he released was "Leave Me Alone." It was like, "I wanna do that! I want my artwork to look like this! I want my video and clothes like this." I was young, I wanted the white socks, thinking I could moonwalk.

But I think that was a defining – besides being in a church – that was the defining moment in my career as a young child. From there, I would do local talent shows. In college, I would sing at this local bar. I went to art school--I needed any extra money. So I would sing cover songs at this bar, and I really started building my fan base from there. And from the cover songs – I was like, "Gonna write my own songs!" It just started to grow and develop from there, and I was like, "Maybe I can do this."

But music was the thing--I didn't really have a choice. It's funny to me when I hear people say, "I want to be an artist." I'm like, "Oh, that's tight." I'm too far in; this is just my gift and my journey. And that's something I just have to do, you know?

I get that. Can you talk to me about the collaborators you worked with on this project?

Yeah. I think I work best in collaboration. I worked on these songs between LA and New Orleans and Atlanta. And I worked with this guy named Haunted who's in the band the Feels and used to be in Washed Out. Me and him always had this love between hip hop, R&B, and shoegaze indie rock, and he was the person who really understood our musical language. We would just start writing from there. We've been friends for six years; we were [gallery] kids around Atlanta just trying to figure things out. He produced over half the project. I also worked with the production duo, Boy. They're based out of Atlanta. I have this knack for getting people together. And Anna Wise. I just felt like these people really could bring something to the table. I eventually ended up bringing everybody to a house in LA and finishing the project there. We would eat together. I'd be cooking, making beats, and we'd be writing. It was very open-format. I also worked with REO. He's a big animator right now. He just did that Sprite campaign with all those GIFS. I kinda keep everything close to home. These are people I've been working with for the last four years in different capacities.

Whether it's visual art or the graphics for the project or music, we're kinda become a family at this point. I'm hella loyal, so I usually try to work with the same people. I've known Anna Wise for maybe almost ten years. I met Niia through our manager. We had this love for Brandy, and she was like, "I want my voice to sound raspy." So she brought out certain qualities in me, and I brought out certain qualities in her, and we were able to really work on the song together.

How does style and your music go hand in hand?

I feel like style is about personal expression, and I feel my music is very much a representation of my fashion. I don't sort of stick to one set thing. I'm very inspired by this '90s, where there's denim, white shirts, the alt-rock days of Alanis Morissette and MTV Unplugged, but then you have De La Soul, A Tribe Called Quest, and TLC – baggy, colorful [vibes]. I just go with what I feel, and that's how I approach tracks as well.

What are you working on after b. drops?

I am working on a new body of music. I just like to stay in it. Of course, I'm trying to do shows and work on this, but I have this burning desire to constantly create and make things just for my own mental stability. Certain people need certain things, like a physical therapist or a psychiatrist, just people to talk to. But what sustains me, keeps me up and happy is the constant desire and need to create beautiful things.