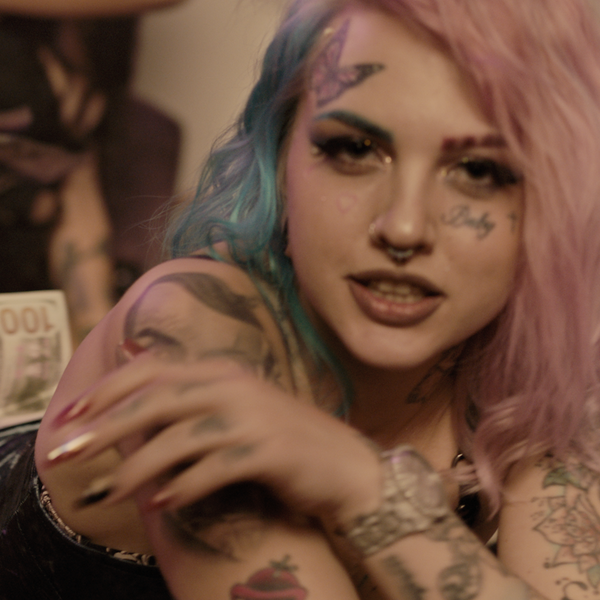 In a society where bisexual women are frequently targeted and fetishized, Baby Goth's new track and music video, "Afterparty," creates a space for them to safely party and uplift each other. Opening with distorted electric guitars, Baby Goth sings frankly about her identity, while embracing fellow queer women: "Let's make a toast to the bitches getting cozy/ It's a lifestyle I believe in."

In the party-themed video, directed by Lillie Wojcik, Baby Goth dances and hangs out with her girlfriends in a car and at a club, illuminated in violet and magenta hues. As it turns out, this was influenced by Baby Goth's synesthesia, her ability to associate music with specific colors. "The song feels pink and purple to me, and kind of dark," the singer says, explaining her lighting choices.

Ultimately, Baby Goth wants "Afterparty" to promote an inclusive message. She says the single "feels like a song you would get ready and go out with your girls to. It's confident, sexy and exciting, so I wanted to capture that in the video as well. Just a fun girls' night out, living raw and in the moment."

She stresses that it was also important to portray her bisexuality through the visuals. "The director I chose to work with had a very similar idea of how to make the song a reality for everyone, as well as compliment my personality and set requests, which made the creative process really easy and fun," Baby Goth says.

And this is only a taste of what's to come from Baby Goth in 2020, as she has a song on the upcoming Birds of Prey soundtrack, which boasts an all-women lineup including Halsey, Megan Thee Stallion, Normani and more.