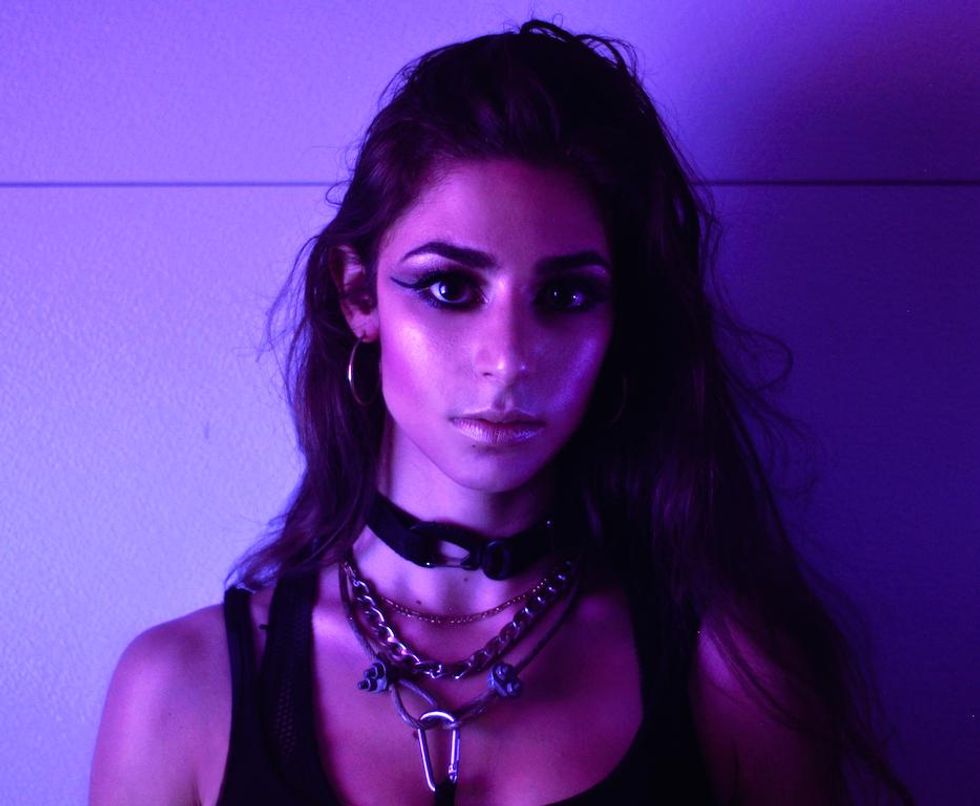 Arielle Herman, aka electronic producer, singer-songwriter and visual artist QUALIATIK, is no stranger to pushing herself past her limits. A former Neuroscience student at Haverford College, the 22-year-old took time off to pursue more musical inclinations, and ended up couch-surfing through New York -- eventually finding herself in Austin, Texas at SXSW, where she ended up opening for Drake. Now, Herman is embracing her duality as both an musician and a scientist through the dreamy, escapist video for "Physicality" --something rendered even more impressed by the fact that she did not know anything about video production beforehand. But you wouldn't know it from the final product, which features stunning purple-laden visuals expressing themes of artificial intelligence, self-destruction and the battle within oneself. As such, we chatted with QUALIATIK about the process of making this video, the role of the subconscious in art and embracing your own melodrama -- read alongside the premiere of "Physicality" below.

Describe the process of making this video.

It was a lot. I started working on the video in early June and just threw myself into the project with everything I had. The process of filming was very physically intense and I also didn't know anything about video production. There were so many weeks spent just sitting and staring at Final Cut Pro until I figured shit out. I feel like I was kind of out of my mind when I was making the video. I filmed in three days. I ended up doing things that were out of control. So many moments were made on a whim; really no part of the video was planned. I had done a ton of prewriting ideas but they weren't really taking form. Everything happened organically because it was so rushed and I was guided by emotional intensity. It was such a crazy process.

I cried when I watched the final version. It just embodied exactly what I felt and it's crazy I made that into a video. That's when I feel most accomplished as an artist, when it all comes together in one piece and I can experience it over and over again.

Was there a certain moment that shocked you?

I think the moments where the main character looks vulnerable. This character is really intense and has a lot of harshness in her but in those scenes you can see it's coming from a soft, confused place. That really resonated in me because I feel like I'm coming from the same place. Especially the very last scene where she looks up at the camera and her hands come up into the air. It's just a helpless stare. That really struck me.

Was there a specific aesthetic you were working with?

Not at all. I just know what I like. I know what visually speaks to me and when it all comes together it might end up looking like a larger aesthetic. It's all emotional for me; it's not branding or taking an aesthetic. It's really just something that's super intuitive and emotional. Those colors and those shapes are really what my world feels like.

There's been a stigma of Math & Science vs. the Arts. Do you think your video blends those two worlds together?

Definitely. I think that's something I've really dealt with. It's been a conflict in me trying to bridge those things in my sense of self. I was definitely trying to create a harmonious coexistence between those sides of me in the video while also dealing with the conflict between them.

How did your subconscious play a role in making this video?

The filming was so fast I had to tap into things subconsciously without even being aware of what I was tapping into and piece them together. That's always been the most important thing about making art to me. Just shutting off, going into autopilot, letting your subconscious express itself, and turning around to see what it says. It's always exciting to see what your subconscious makes; it's what allows you to create honest art. That's very much what happened in this video.

What made you want to use animation?

It just felt right. It's very expressive for me. I've dabbled in animation and I've always been physically drawn to the shapes and forms. So for me it just made sense.

Talk about the melodrama of the video

The video is very over the top. It's something that just happened and came out of me while I was making it and at times I thought it was ridiculous but honestly what did I expect? If everything in your life seems so intense it's going to come across in your art. You can't ignore that side of yourself. I needed to recognize that it's really just melodramatic shit that I feel because I'm this way; it's really not a big deal. There's nothing you can do about it; it's just how I'm wired. There's so much of the video that's over the top and ridiculous but I need to remind myself it's just artistic neuroses.