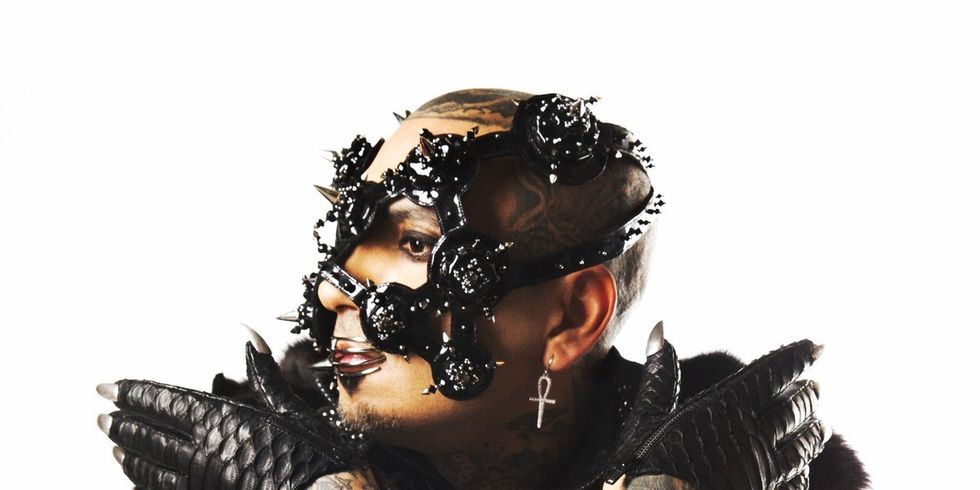 I've never capped off an interview by getting a lecture on how to combine sex and sigil magic, but then again, I've never interviewed Leafar Seyer, the driving force behind San Diego killwave duo Prayers. The 40-year-old musician, born Rafael Reyes in Michoacán, Mexico, who refers to himself as a "cholo goth," was a former gang member who grew up idolizing British post-punk in a rough neighborhood in San Diego.

Prayers, the duo he formed with Dave Parley in 2013, is on the rise, fresh off a two-weekend stint at Coachella and finishing up the band's new EP. Baptism of Thieves features dark, synthy beats paired with Seyer's wail, and lyrics that feature as many references to the occult (Seyer is a self-identified Luciferian) as nods to his past violence and gang life. Seyer spoke with PAPER about blending subcultures, collaborating with Kat Von D, and his brushes with death.

Was "cholo goth" a subculture that was already brewing, or is Prayers really paving the way?

It's both, for sure. We're the pioneers of cholo goth, we created the sound. But I've noticed, growing up in Southern California, there were always Chicano kids who were living in both worlds. Kids who would walk around with the Joy Division shirts and then they'd be sagging. I'm a perfect example. I went to a white school, and my white friends introduced me to new wave, dark wave and punk. Then I'd go home to my neighborhood: I grew up in gangs, but I also was in love with this other aesthetic. When I came out with it, I was doing it for self-exploration, celebrating who I was and wanting the world to know that I wasn't going to play by their rules. In that process other people came out and said, "Hey, I can identify with that."

How did your past lead you to Prayers?

I've allowed the universe to be abundant. I've allowed it to love me, to embrace me and say, "Hey, no more pain." Because that was my life before: Dead ends, self-destruction, lots of sorrow, lots of loss. And it could've killed me. There was a time I was very suicidal 'cause it seemed like life was against me. Just thinking about it makes me emotional. I have to embrace that past now, and say, "You made me who I am." That's why these songs grab people the way they do, 'cause they come from the heart. I really have lived a very difficult life. I have two strikes: I've been shot; I've been stabbed. Now it's become clear that I should help those who may be like the me from the past, and let them know that there's light at the end of the tunnel.

You've taken a really machismo, aggressive culture and combined it with a very sensitive path. What's the reaction like?

Do you also get support from kids who feel they are finally being spoken to?

What's really cool about what we're doing is that there's no middle ground. Either people love it or hate it. It's like alchemy: It's gonna have a reaction. I see it more and more every day in the eyes of people, the way they look at me when we're performing, how much it means to them that I'm doing what I'm doing. Because in America the majority of entertainers are black or white, I hear that all the time: "Thank you for representing, for letting people know that we're artists too, that we have a voice and things to offer besides being the backbone of the American workforce." There are three songs that are very Prayers, like the foundation of what we started. And then I wanted to honor the bands that I grew up listening to—New Order, Pet Shop Boys, Christian Death, the Lords of the New Church, Joy Division—and do a couple of songs that are very throwback-y. So we created "Black Leather" and "Smiles Mask Tears," [which] have that New Order vibe. "Beauty in Bedlam" is very Depeche Mode. I wanted to pay homage to bands that had a huge impact on me.

Kat Von D sings on "Black Leather" and plays a part in the music video you recently released. How did you guys get together?

I played a song for Travis Barker [who produced Prayers' last album, Young Gods] called "Underneath the Stars" that's on Baptism of Thieves, about a serial killer who's in love with a girl. I was telling him the concept for the music video, and he says, "You know who the perfect person for this video would be? Kat Von D, I'm friends with her." And I was like, "Well, why don't you call her right now and tell her what you just said to me?"

I knew she could sing and was classically trained to play the piano even before her and I met. I followed her career from a really early stage just 'cause I love what she represents. She kind of broke the mold of what beauty is and how it should be seen. I was working on "Black Leather" and I was like, 'Man, it's missing something.' I was like, 'Fuck having her in a music video, we'll have her on our song.'

She came to the studio, added her touch and she did her part in one take. I'm grateful; she's very inspiring to be around.

Catch Prayers on tour this summer: