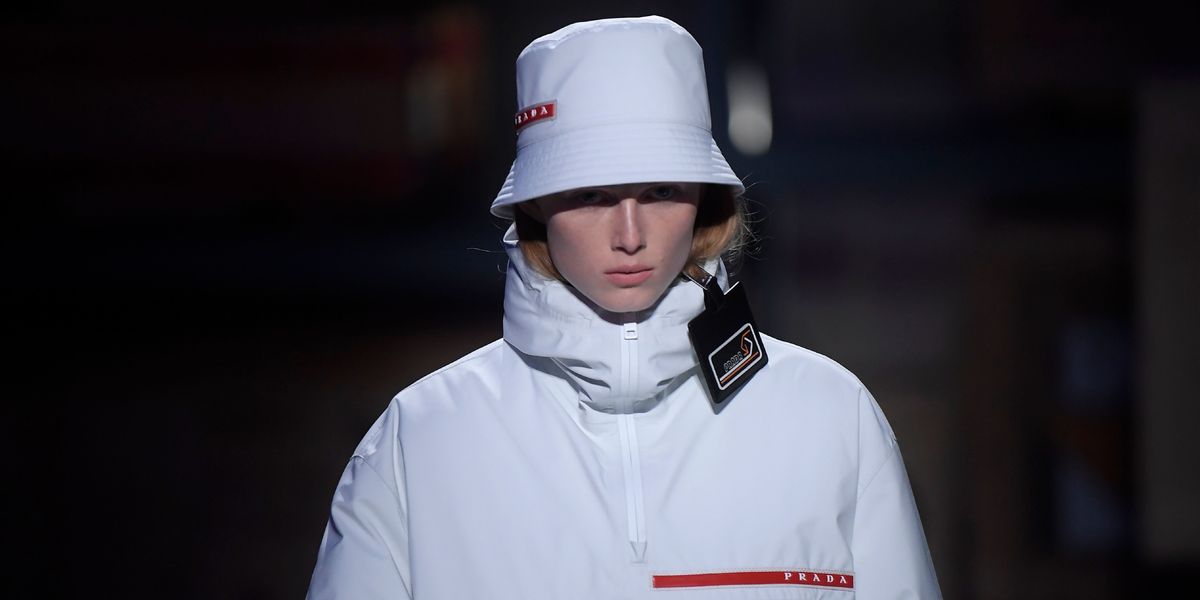 Show us your nylons! Or "pocone" rather, the name for the special fabric that Prada developed for their signature backpacks and small accessories. This menswear season it is found not just in the brand's cash cow carry-all (FYI, formally called the Vela since its introduction in the late '80s), but on just about everything from pants, suits, tops and gravity-challenging backwards backpacks (front packs?).

Spring '18 was set in something of a warehouse filled chockablock with shelves of Prada gear of seasons-past: shipping crates stamped with house hits like their firebird, drag race pump of spring 2012, rabbits from 2014 and even some roosters if you squinted (also dinosaurs?). This gave the impression that it would be not so much a shop your closet kind of year, but more "shop your Rem Koolhaas-designed storage facility." Think of it as the Amazon fulfillment center of your fashion dreams.

The show opened with the aforementioned fabric wrought brilliantly in sumptuous tops, pants and jackets, calling to mind a 1994 season but this time for the fellas. Models were also fitted with fisherman hats throughout that felt perhaps more cloche than carp, but they already feel like a hotcakes item.

Most excitingly on offer were glorious mash-up separates sporting iconic prints of seasons-past: the lipstick print of 2000, next to the firebird of 2012, next to the jolie laide of 1996. This was catnip for Pradaphiles, who haunt TheRealReal and e-bay for those original (and rare) printed pieces. The notion of reworking iconic and instantly recognizable prints is not necessarily new for Prada, having toyed with it consistently for the past few seasons in an attempt, one could argue, to recall the halcyon days of Prada's fashion dominance in the last two decades. Lackluster sales (not unique to Prada) and a tax inquiry have been the headlines as much as the runway propositions in the last couple of years.

As this Prada man and woman wandered through the warehouse, there was a sense that the navel-gazey comic book doodler or carefree, corduroy university chap of the past two seasons had left the nest and was confronting a colder, brave new world (all the more need for the tufted blouson jackets). With ID badges bouncing off of their piled on outerwear it was hard not to sense a certain toe dip into Gvsalian irony, referencing the baggy utility pieces of Interpol or say Milanese city workers. Also present and accounted for: Ugly Sneakers, which we would say is a canny move — Prada loves nothing more than an ugly shoe, especially for the men.

The final section proved perfectly tense, with a parade of be-suited bogey men, whispering to mind a heretofore uncharted reference of Prada: The X Files (minus the mist and camp theme music — the soundtrack of todays' show shifted between excerpts of the Carol score and Angele David-Guillou). Which is all to say that Prada pivots into a new act (Prada 365 to be exact), we still believe, but just don't call it nylon.