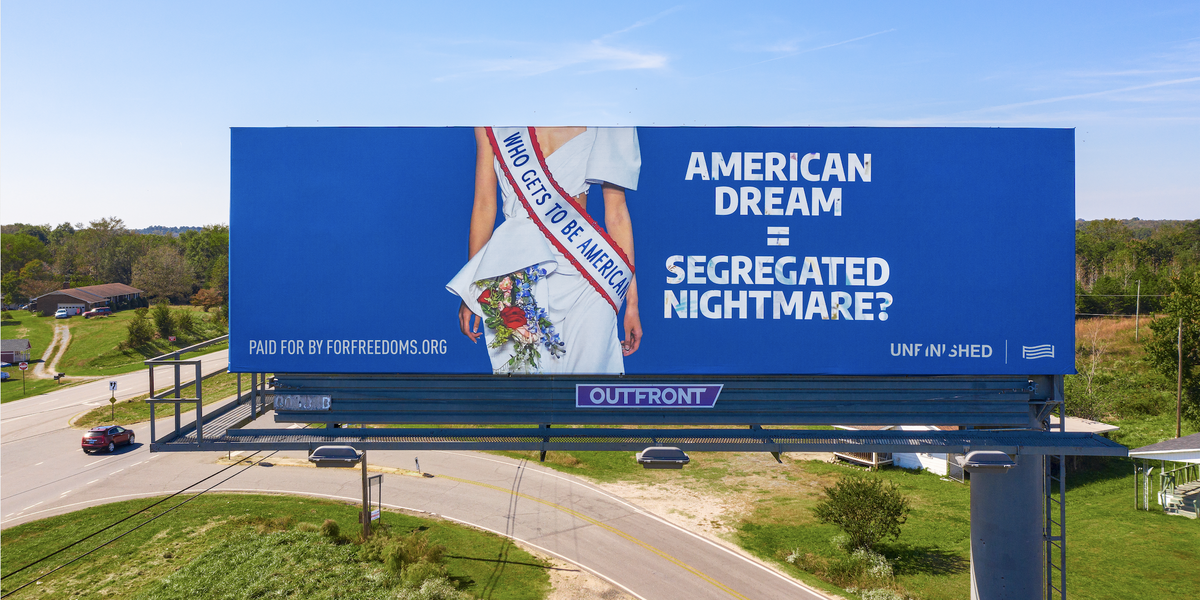 Prabal Gurung has long used his platform in fashion to raise awareness on issues that reflect America's political climate. From having models walk in graphic t-shirts emblazoned with phrases like "I Am An Immigrant" and "Our Bodies, Our Choices, Our Power" to inviting Gloria Steinem to sit front row at his show, the designer has always made his convictions and beliefs clear.

His recent endeavor, however, is one that goes off the runway and into the swing state of North Carolina in the town of Peachland, where a large billboard with the words "American Dream = Segregated Nightmare" is displayed in bold letters. Positioned next to the words is an image of a model from his Spring 2020 show wearing a "Who Gets To Be An American?" sash.

That collection, which tied with the brand's 10th anniversary, was inspired by a TIME cover from November 2018 exploring that very same question and which Gurung has continued to confront in order to make sense of country's divides and suffering.

"We continue to say the names of Breonna Taylor and George Floyd. We march. It clear to us all that equality for one group does not lead to true liberation for all. We ask: what does the American Dream stand for, and who does it serve?" he wrote on Instagram.

According to Gurung, who was born in Singapore, but grew up in Nepal before moving to New York for school, his goal was to spark dialogue on the oppression of marginalized communities in the US due to systemic racism and structural inequalities. It's a commentary on not only who gets to claim the American identity, but also a confrontation on the American Dream ideal and how it's contributed to racial and social injustice.

"My piece... was created to challenge what this dream really stands for and who it serves — and more importantly who it marginalize," Gurung said in a statement. "For too long, this country has left behind and exploited its Black, Brown, Asian, Indigenous, LGBTQ+ and undocumented family in pursuit of an ideal that has left us divided and wounded. As a nation, it is our patriotic duty to continue in our resistance and challenge the very fabric from which this country that we love was weaved."

The billboard is a part of a nationwide initiative by the art collective For Freedoms called "2020 Awakening," which partnered with different artists to erect billboards in each of the 50 states that touch upon issues of the current campaign cycle to encourage "deep thinking and self reflection" (it kicked off during Indigenous People's Day on October 12).