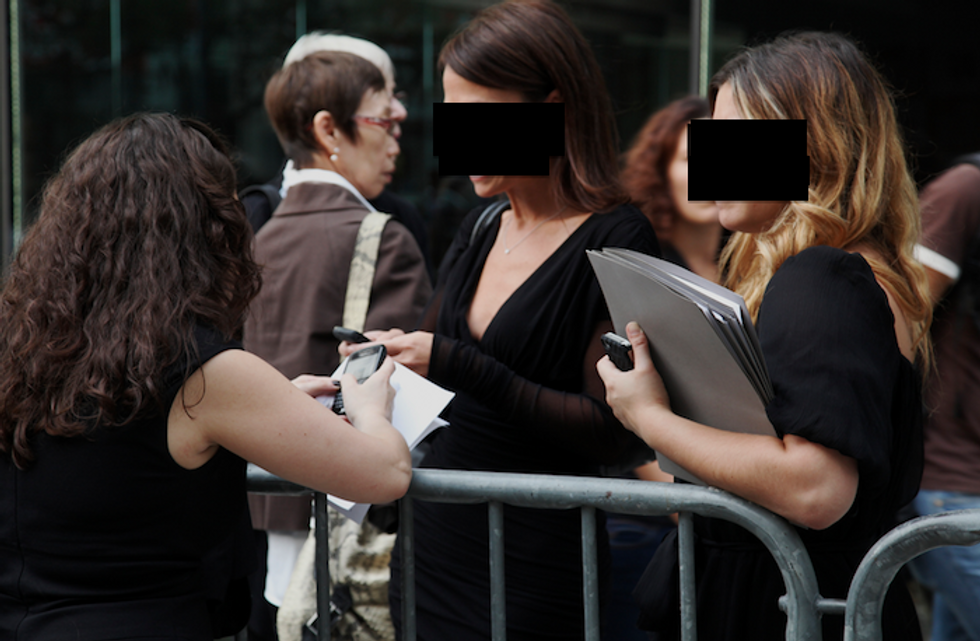 by Anonymous PR Girl
PAPERMAG
(This is not an image of the author of the story.)
While designers, models and celebrities might get all the attention during fashion week, the real unsung heroes (or, to disgruntled gatecrashers, "villains") are those women and men in black wielding clipboards, iPads and headsets: fashion publicists. It's their job to make sure shows and parties happen without a hitch but, as with anything worth doing, it's not easy. While they may appear unruffled, the behind-the-scenes action taking place backstage or at the office is often more hectic than any of us can imagine. Below, we asked a former publicist at a top firm to anonymously spill the dirt about everything from weird requests from celebrity assistants and guestlists to party crashers and Adderall.

On what goes into putting together seating charts and party guest lists:

If you know your client and the social temperature, you should instinctively be able to pull together a list of people for an event: a few VIPs (but never actors, they expect the fucking world), a gaggle of who's relevant and hot right now, some models, and a few unexpected wildcards to keep it interesting. I've seen people spend days on them, rummaging through RSVP inboxes, printing these 30 page lists. Like what is that, a manuscript? No one is even going to look at that at the door.

On getting weird requests to attend parties or fashion shows:

The weirdest invite request I've received was from Paris Hilton's assistant. She was writing from a Gmail account and wanted to know if Paris could come to a dinner for this niche fashion magazine. I didn't know whether to believe it or not, it was just so bizarre. Paris ended up coming and was a big hit. Everyone loved her, it was all over Instagram.

I was also once offered box seats from a high-profile athlete to get his wife and her friends into a party. I think it's the only time my dad was impressed by my job in PR.

I was working the door at an Art Basel party in Miami, and a girl gave me my own name to get in. It was almost laughable. I turned her away, but saw her later that night in the bathroom. She had climbed through a tiny window, and cut up her legs just trying to get into the party. It wasn't even a super exclusive event! At that point, I just let it slide.

A famous rapper once requested a very specific brand of freeze pops before performing. Like the ones you used to get as a kid that come in a strip, that you had to cut the tops off of. Do they even still make those? I bought the Flintstones brand and hoped for the best.

On how fashion publicists REALLY get through fashion week:

Ironically, it's the week where publicists are the least healthy. All year everyone obsesses over their weight and GOOP's marrow broths, but it's no holds bar during Fashion Week. That's when you'll see the most judgmental people facing cheeseburgers at their desk, crying over a spreadsheet.

To stay awake, Adderall is popular. And Red Bull, because those promotion girls are giving it out literally everywhere. But have you ever had to deal with an over-caffieinated publicist? Terrifying! That and the cellulite rumors are enough to keep me away [from Red Bull]. You sleep when you can / where you can, and try to power through without offending anyone. People love to complain about how crazy the week is, but let's be real: working in a factory is stressful. Performing neurosurgery is stressful. Fashion Week is not that bad.
You May Also Like
Music