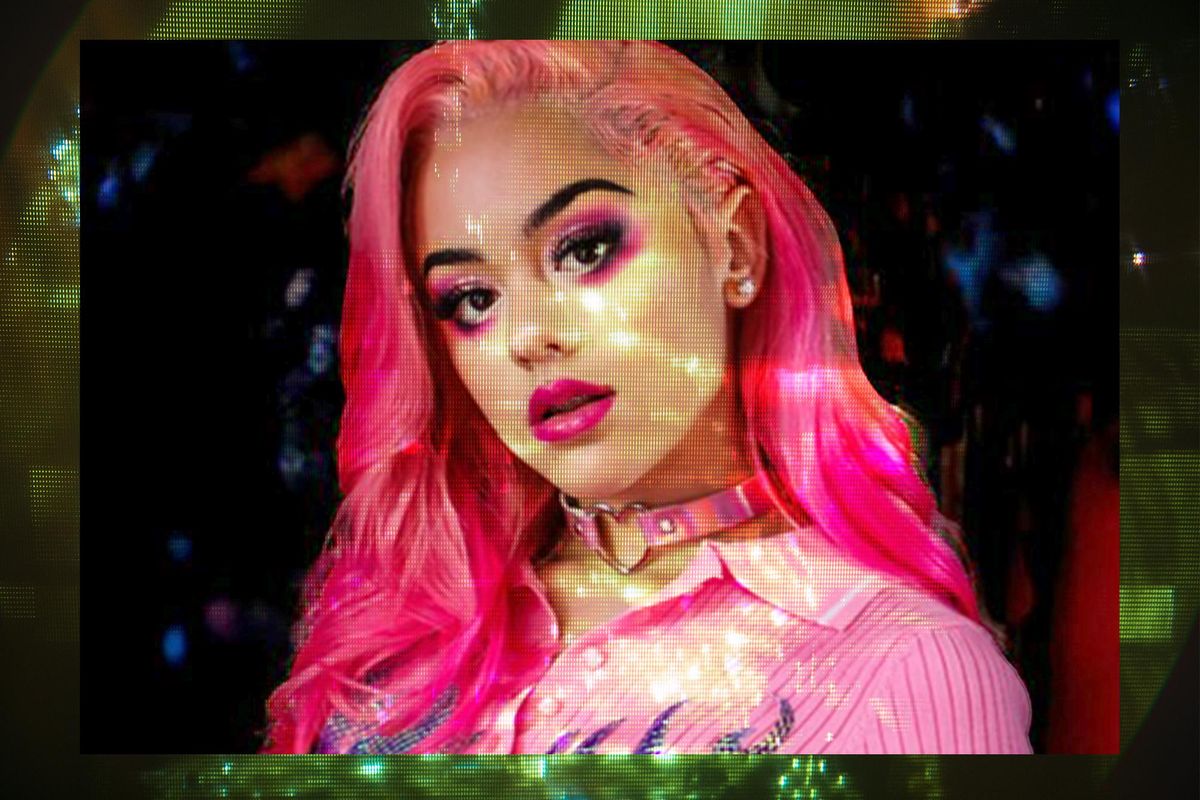 All of 2020 has felt like a bad dream, and the holiday season is especially grim. So this week we're leaning in to the terror and celebrating with Five Days of Rico Nasty, the rapper whose debut album, Nightmare Vacation, doesn't seek to comfort listeners so much as validate their anger and anxieties. We'll be talking to the rapper and her collaborators about the best and worst parts of an awful year... that just happened to have some pretty great music.

"Every bitch in the world is a slut, whether they deny it or not," says ppcocaine with a knowing chuckle. The 19-year-old rapper, whose sex-obsessed, devilish rhymes have turned TikTok upside down this year, is describing the video for "Slut" that she's due to release in a few days to PAPER over Zoom and sounds excited. It'll be just the third music video in her young career, and it arrives right at the end of a whirlwind 2020.

Before picking up the pen last December, ppcocaine was a dancer at a strip club, dealt with drug abuse, and went through a period of homelessness. But after making friends with rising rapper NextYoungin, she met a producer named SpainDaGoat who encouraged her to try out rapping. She was an instant natural, developing a unique style — originally under the name "trapbunniebubbles" — that twisted the innocence of nursery rhymes on their heads with crotch-grabbing raps over their purescent beats, delivered with the kinds of cadences that each deserve an individual straightjacket. Songs like "3 Musketeers," "PJ" and "DDLG" would go viral on TikTok, leading her to the kind of instant fame that most would dream of.

With that kind of fame comes having to learn at the blink of an eye. She's been "canceled" a couple of times for insensitive lyrics and misgendering someone during an argument without her knowledge, so trying to figure out how to be the best version of herself, that respects others and can cope with the stress of always needing to be perfect, can be exhausting. But ppcocaine hasn't been discouraged by what she's experienced so far — it's all apart of the process. "Mentally, for a while it was tough, but I've gotten, I wouldn't say over it, but I've gotten better at phasing it out," she says of the drama.

For this installment of Five Days of Rico Nasty, PAPER spoke with ppcocaine about her wild year, collaborating with Rico Nasty and what she's working on, below.

2020 has been a huge year for you. How would you describe it?

Pretty crazy. I guess you could say my year kind of started in December of last year. So it's just been really crazy. I really couldn't put another word to it.

What made you want to start rapping? Do you remember what you were thinking?

Well, I started writing when I was younger, like 15 and 16. I didn't start recording until December. But I really didn't think anything of it, I just recorded it because it was fun and I liked the way that my voice sounded.

How have you been enjoying making music so far?

So having this breakout year this year, how does it feel for it to have happened during the pandemic? Do you think that everyone being locked down has had an impact on your growth?

Yeah, it definitely has helped and hurt. It hurts because I can't go to shows and stuff, but it helps because I really use TikTok as my platform, so it's really like everybody's sitting down on their phones on TikTok. So it's like no one's really doing anything. They're not going outside. They're not doing shit. So using TikTok and having everyone be on there has really helped. And yeah, the only thing I would say is a downfall is not being able to go to shows and stuff.

What kind of growing pains do you think that you've gone through in the industry?

I mean, I was kind of born for this shit. Not to toot my own horn, but I have been performing since I was a little kid, whether it be dance, choir, or ballet. So really, I've always been a drama queen. I've always been the star of everything. I like to be the center of attention. So there isn't really anything that I would say is a downfall. Everybody deals with hate, so that's one thing, but I just know how to handle it well. So other than that, I really haven't had any problems.

So when dealing with that hate on social media, does that have any impact on your creative process?

Creative process, it doesn't really affect me at all because I really don't care. I just would make music to make them mad, you know? But mentally, for a while it was tough, but I've gotten, I wouldn't say over it, but I've gotten better at phasing it out.

You worked with Rico Nasty on the "Smack A Bitch" remix. How did your relationship with her develop?

I've always listened to her. When I was a younger, she was my spirit animal. I just like how she screams. I like how she carries herself and shit. So I was like I always wanted to work with her. Literally, when people would compare me to her, I would take that as a compliment because I'd be like, "Bro, I fucking love her."

And then, I recorded it while I was in Atlanta. And at the time that I recorded it, something irritating was going on right before, so it kind of fueled my rage and then hers too. So it was super lit because I'm like, "Yes." And I sound angry in the song.

But after that, even before that, we were texting and stuff. We'd occasionally FaceTime. And recently, she was just in Cali, so we linked up for the first time, and we were just talking about regular shit. She's just a regular ass person. A lot of people take their fame and put themselves on a pedestal, but hanging out with her made me realize she's super down-to-earth, and she's super eager and shit. And I like those kind of people to hang around. I don't like people who, I wouldn't say think too highly of themselves, but kind of like, I don't know, are conceited in a way. But she wasn't conceited, she was just really chill.

I just had a good time hanging out with her because we were talking about crystals and shit, and it's like some people think that shit's weird. And the fact that she's really open-minded, and she really was just having a cool ass conversation with me, and it was lit. We hung out the day before she went back to Maryland, so I was like, "Yes!" I was so hyped to hang out with her.

What are some things that you're doing to stay down-to-earth?

I'm really just myself. If somebody were to ask me a question, I just answer like an open book. My whole life I've always been an open book. I don't really like to hold shit in because it's like what's the point? And it's like I know growing up, if the people that I admired were openly talking about the shit that they go through and openly talking about their troubles and shit, I feel like in a way that would have helped me to know that celebrities are not emotionless because most celebrities don't show their openness to the world. They don't show anything to the world. And it's like, bro, for what though? Why? Why aren't you opening yourself up? It doesn't make sense.

Speaking of openness with fans, I saw that you said that you respond to a lot of your messages on Twitter. What kinds of messages do you usually get?

Most of them are happy. Some of them come to me when they feel like they're having mental health issues. And me, growing up, I had a lot of mental health issues. So it's like, I'm not a therapist, but I'm a really easy person to talk to. And everything me and my fans talk about is confidential. I'm not going to go post what me and my fans talk about because it's like some of them come to me with real issues and stuff. And it's like I know I'm not a therapist, but hearing it from someone they admire or being able to talk to someone they admire and for them to give them actual help and lead them to the right resources, it helps them.

At this stage in your career, is being a role model something that you want to be?

Yeah. I wasn't surrounded by the best role models growing up. And me myself, I'm not saying I'm the best role model either because there's a lot of shit that I've done that I'm not proud of. But I know now that I wasn't proud of that stuff, so it's easier for me to lead them in the right direction, not to follow in my footsteps. I don't encourage anyone to follow in my footsteps. Yeah, I have a big follower range. Life is pretty sweet right now, but it's like I wouldn't tell people to follow the footsteps that I did to get here.

You've announced that you're dropping on the 18th and the 22nd. So I just wanted to ask you, what are you working on now? What do you have planned for the near future?

Well, on the 18th, I drop a song with a music video that's kind of going around TikTok. It's called "Slut" because every bitch in this world is a slut, whether they deny it or not. They're all sluts. I have that one coming out. And then I have just a little Christmas anthem coming out on the 22nd. So that one's fun. And then I really just work with Bankroll Got It, and I go to his studio quite often. Whenever he's free, I'll go there, and I'll cut up because I like the vibes there and stuff. It's really nice. But I have a lot of songs just on the shelf, posted up for whenever it's ready to be dropped.