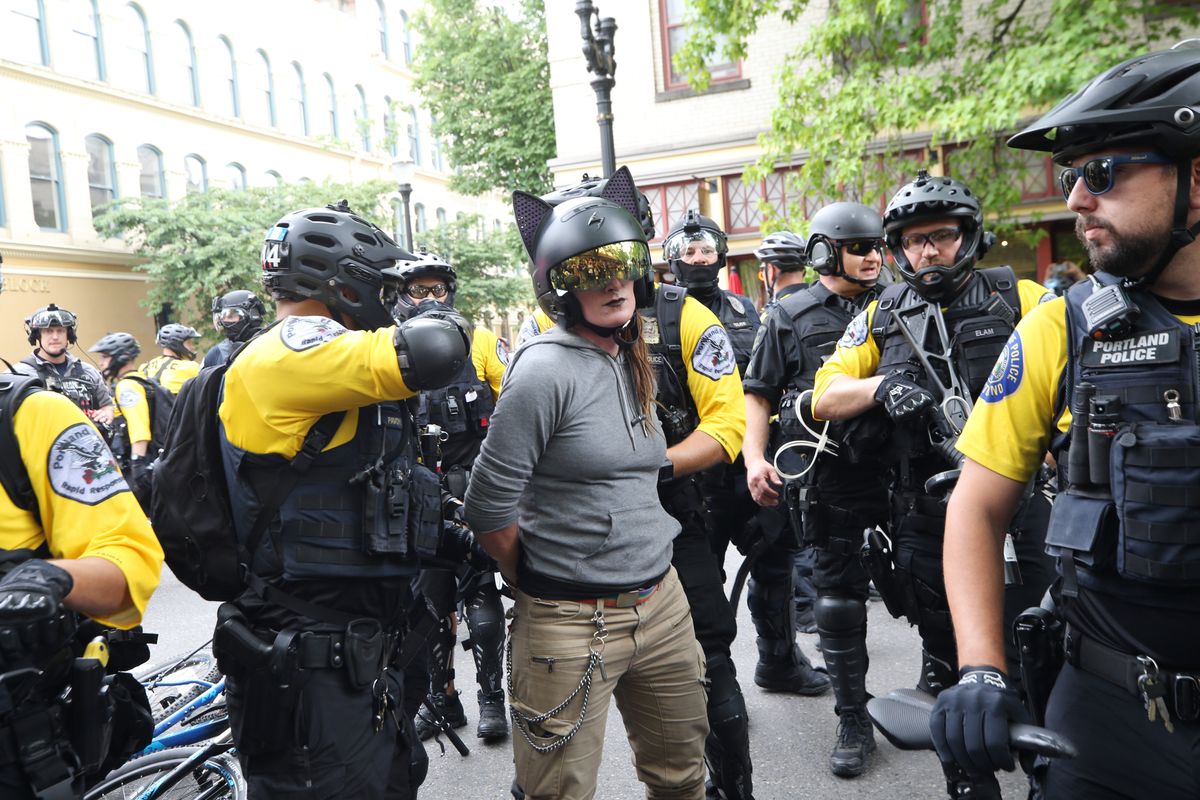 What Happened at the Portland Protests

On Saturday, chaos ensued in the city of Portland, Oregon as left-wing, militant anti-fascist group Antifa clashed with far-right and extremist groups Proud Boys and Patriot Prayer as they rallied to "end to domestic terrorism." According to CBS Portland affiliate KOIN, at least 13 people have been arrested and one person taken by ambulance.

For fear of violence, downtown businesses closed for the day, and there was also a massive police presence. The Portland Police Department's official Twitter account posted a tweet about 30 minutes after the protests started at 11 a.m., saying that officers were there to protect people's right to freedom of speech. They tweeted updates afterwards as well about confiscating weapons from "multiple groups."

#ppbalert #pdxtraffic Portland Police officers have seized weapons from some individuals. We have additional road closures. Naito Parkway is now closed between Morrison and Hawthorne bridges. The Morrison Bridge offramps to Naito are closed.

Still, despite their seizing weapons, a lot of violence still occurred between the far-right and their counter-protesters. Portland Police Lt. Tina Jones told CNN that law enforcements worked to keep the opposing groups separate, and that there were "limited interactions between individuals." She said that the demonstrations were "contained to a very small area of downtown."

On Twitter, multiple people have been posting footage of protesters attacking one another. Of course, many are using this event as an opportunity to point fingers at democrats and promote Trump, insinuating that the real problem is the left as the violence was allegedly being caused mainly by Antifa. But some tweeters point out that the biased reporters posting these violent videos purposefully captured these incidents on tape, but failed to capture the violent acts the far-right were committing. Some are also accusing the police of coordinating with violent far-right protesters to help locate Antifa protesters.

Again, this news has been weaponized to push political agendas. It doesn't help that Trump commented early on Saturday, calling Antifa a terrorist group — antagonizing them when they're also counter-protesting white nationalists and modern-day Nazis. The truth of the matter is that neither extreme — far left or far right — is helpful, and neither is any violence.

Major consideration is being given to naming ANTIFA an “ORGANIZATION OF TERROR.” Portland is being watched very clo… https://t.co/W2uvDB4NNZ
— Donald J. Trump (@Donald J. Trump)1566050659.0

Mayor Ted Wheeler responded to the President's tweet in an interview with CNN Saturday, saying, "My job today is to be heads down and focused on maintaining the public safety here in Portland, Oregon. I'm focused on what's going on the ground here in my community." "And frankly, it's not helpful," the mayor added. "This is a potentially dangerous and volatile situation, and adding to that noise doesn't do anything to support or help the efforts that are going on here in Portland."