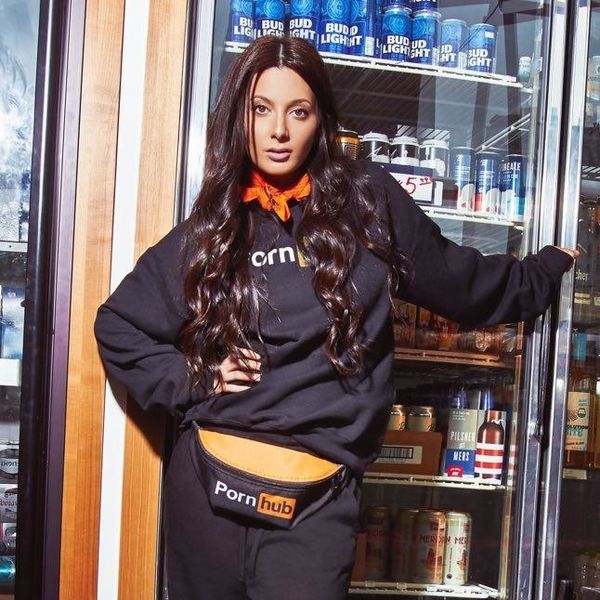 "When I first started out here five-and-a-half years ago, things were very different for us as a brand and in society in general," she says, pointing toward the world's general trend toward "becoming slightly more unhinged in all respects" as a likely reason why Pornhub's social media presence has gone from a deep-internet cult fave to a verifiable pop cultural phenomenon.

"The wider acceptance of sex has had a wonderful impact on our industry. I think we've made very big progress in the sex work realm, and there's still a lot more to do."

But another big component that plays into Pornhub's mainstream relevancy is the way they make a point of staying on top of pop cultural trends — and that's where Aria comes in. In an online world where every brand on Twitter tries to stay relevant by reposting a stale meme or attempting to "shade" celebrities or competitors, it's admittedly difficult for a social media manager to ensure they don't teeter too far into cornball territory. That said, Aria is an arguable master of the artform, though she admits that Pornhub's wide target audience (i.e. everyone because, again, who doesn't watch porn?) means that it is "a bit easier to please people."

"Truly, I think anyone, anywhere, no matter what walk of life they are from, can be cringeworthy," she says. "I think it's my job to ensure I don't make people cringe regularly. Maybe because I'm so sensitive to how bad other social media can be, it's made me hyper aware and in tune with what I deem quality."

Unfortunately though, the limitations of big tech aren't the only issue she faces on a daily basis. In addition to fielding the type of negativity that inherently comes with being a front-facing person working on the internet, Aria has also personally been subjected to a significant amount of sexual harassment in the form of gross messages and unsolicited pictures that she says, "I never in my life wanted to see."

While she takes it in stride — specifically making a point to not pay attention to the trolls and icky messages — it is, undoubtedly, disturbing. As Aria points out, she and fellow female social media managers, including Red Tube's Emma and YouPorn's Katie, are all too often "put in a box where everyone assumes it's ok to be vulgar or sexually open with us."

And though constantly experiencing this type of depersonalized fetishization can be extremely off-putting and demoralizing, Aria continues to carry on — working to further the understanding that there is a "human side to working in the sex industry."

"For every shitty person trying to take you down, there's about three who are super supportive and wonderful," she says. "It's a give and take like anything else."

With all of this in mind, she's still incredibly committed to her work, the mission of destigmatizing sex and the adult industry, as well as continuing to facilitate conversations surrounding sexual health and wellness education.