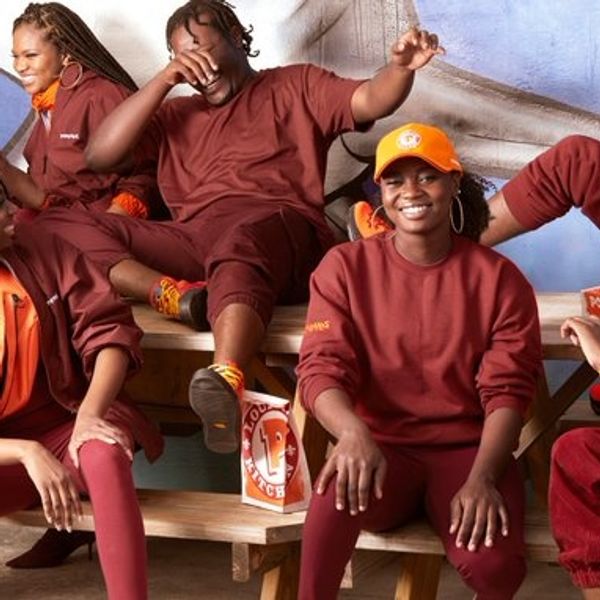 "Love that look? It's our uniform," the official Popeyes Chicken account tweeted this morning alongside a picture of models dressed in some familiar-looking maroon and orange sportswear, surrounded by Popeyes products. The account concluded the message with a link to ThatLookFromPopeyes.com, an e-commerce portal with garments resembling those from Beyoncé's now-viral Adidas collab. The snafu already has the BeyHive asking the age-old question: what came first, the chicken or the IVY PARK?

The looks from the new Popeyes campaign do look eerily reminiscent of the most talked about athleisure collection of the year, but Popeyes is claiming the contrary — that their uniforms inspired Adidas x IVY PARK. While influencers and celebrities everywhere are clamoring for a massive PR package from Beyoncé, Popeyes is ready to capture some post-ironic market share.

Items from the Popeyes collection range from a mere $10-$40, much more reasonable than the near-$100 price point of some of Beyoncé's looks. Those excited to buy might already be out of luck, though, considering items are selling out within hours of their initial launch. The sleek maroon uniform crew neck is fresh out of stock, with other garments sure to follow.

Neither Bey nor IVY PARK have made a statement yet responding to Popeyes' subtweet, but you can bet true members of the Hive won't give into the fast food chain's courting of the stanbase. Spicy chicken sandwich stans, on the other hand, might need to cop a few pieces for themselves and for resale on their Grailed accounts ASAP.