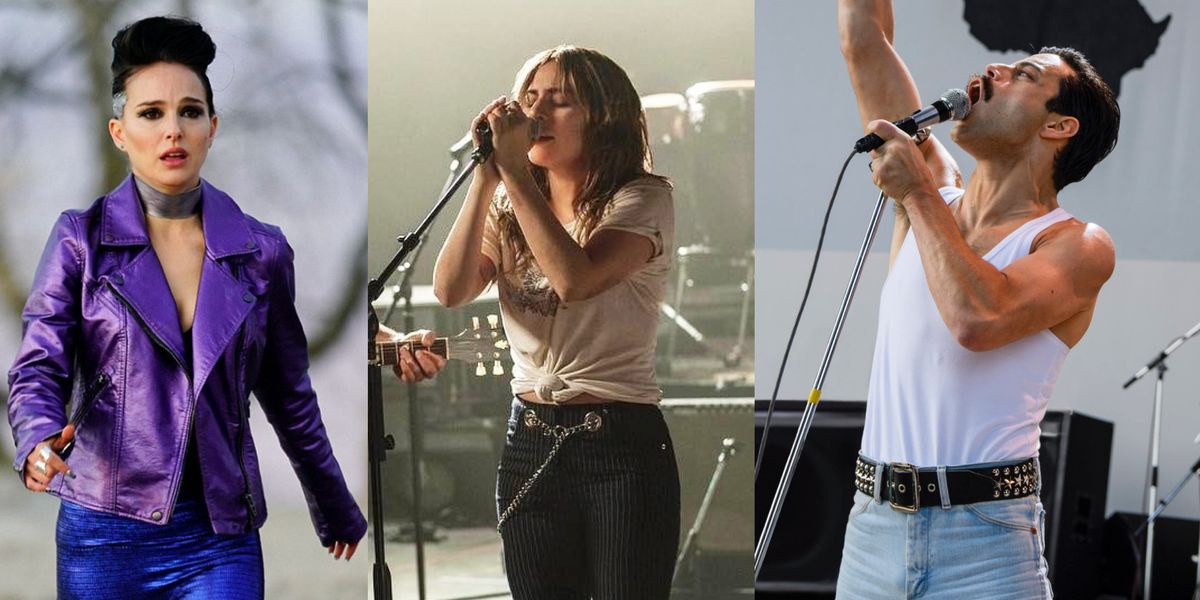 What Films About Pop Stars Teach Us About Empathy

This article contains spoilers for A Star Is Born, Bohemian Rhapsody, and Vox Lux.

If films are empathy machines, as the late film critic Roger Ebert described, what does it mean that three of 2018's most talked about films deal with almost identical subject material? Though decades and worlds apart, A Star Is Born, Bohemian Rhapsody, and Vox Lux all focus on a single star's meteoric rise to fame. There's Jackson Maine, a larger-than-life country pop sensation who propels Ally, an exceptionally talented nightclub owner, to even greater heights of stardom. Then there's Freddie Mercury, an outcast from an immigrant family who assembles and fronts one of the most successful rock bands of all time. Finally, there's Celeste Montgomery, a high school shooting survivor who goes on to become a megalomaniac pop star the public both lionizes and vilifies. In many ways, these are tales as old as time. In fact, A Star Is Born has famously been made twice prior to its 2018 rendition. Yet, these recent interpretations of the rags-to-riches narrative feel strikingly of the moment.

It's entirely possible that these films were meant as nothing more than a commentary on fame itself. But one of the many implications of living today's political landscape is that when you talk about celebrity, you're also talking about modern politics. We live in an era when traumatized teenagers can become celebrity gun control activists in the wake of a national tragedy; when a bartender from the Bronx can command levels of attention usually reserved for presidential candidates after becoming the youngest person ever elected to Congress; and when a reality television star can become the President of the United States.

While Vox Lux tackles this connection more head-on than the other two films, each of them delivers a cautionary tale wrapped in fantasy on the trappings of hypervisibility, charisma and populism.

First comes the making of the icon. We derive a kind of voyeuristic pleasure in seeing the literal choreography of stardom play out before us. After being plucked from obscurity, Ally, Freddie and Celeste leave behind their ordinary lives as they work their way through the well-oiled machine of the entertainment business. This mythical odyssey is one we know well from the political arena, too. It's the same journey we readily celebrate when a figure like Beto O'Rourke — or Barack Obama — emerges from the doldrums of the Democratic party. He's the one we've been waiting for, we whisper excitedly to each other, to ourselves.

As our protagonists' closest relationships begin to buckle under the pressure of their new fame, they receive validation from the most magnetic character of all: the audience. The swelling crowds and thumping energy feed our new stars — in all cases to a nearly total detriment. As viewers, we can feel the destructive underbelly of this new force growing in size and power, but we're just so excited by it. And this, too, feels familiar. The Crowd has taken on a role of its own in Trumpian politics. It is the roiling masses that rallied around Donald Trump the Candidate, the same ones that stormed Charlottesville at the Unite the Right rally, and the millions of protesters who overshadowed someone's inauguration somewhere. We recognize The Crowd's potential for unleashing both terror and magic.

Related | People Feel Like 'A Star Is Born' Was Robbed

As the saying goes, the higher you rise, the harder you fall. This is true of the characters at the center of these three stories. And notably, each fall from grace seems to bring with it a form of bodily destruction. Ally and Jackson's relationship comes to a tragic, violent end. Freddie Mercury discovers his body is rapidly deteriorating from HIV/AIDS. And Celeste's masochistic habits are presumed to continue unresolved. Celebrity destroys what it creates, and in the age of Twitter politics, we see this unraveling occur at warp speed.

Perhaps A Star Is Born, Bohemian Rhapsody, and Vox Lux show us a fragmented version of our cultural and political reality. They reflect back to us our deep desire to project hope onto something — or someone. They highlight that we don't just want leaders anymore; we want stars.

And in response, these films offer us a warning. "They wanted a show, so I gave them a show," Celeste yells at her concerned manager in Vox Lux. As the audience, we're forced to confront our own complicit role (The Crowd's role) in creating hollow icons out of people. After all, in a celebrity's world, any publicity is a good publicity. No one abused that tenet of star-power more than Donald Trump in 2016.

As it relates to the question empathy, maybe these films are challenging us to relate to even its darkest, most flawed characters. In the face of a global leader who appears to have no empathy at all, maybe seeking it is our greatest weapon.