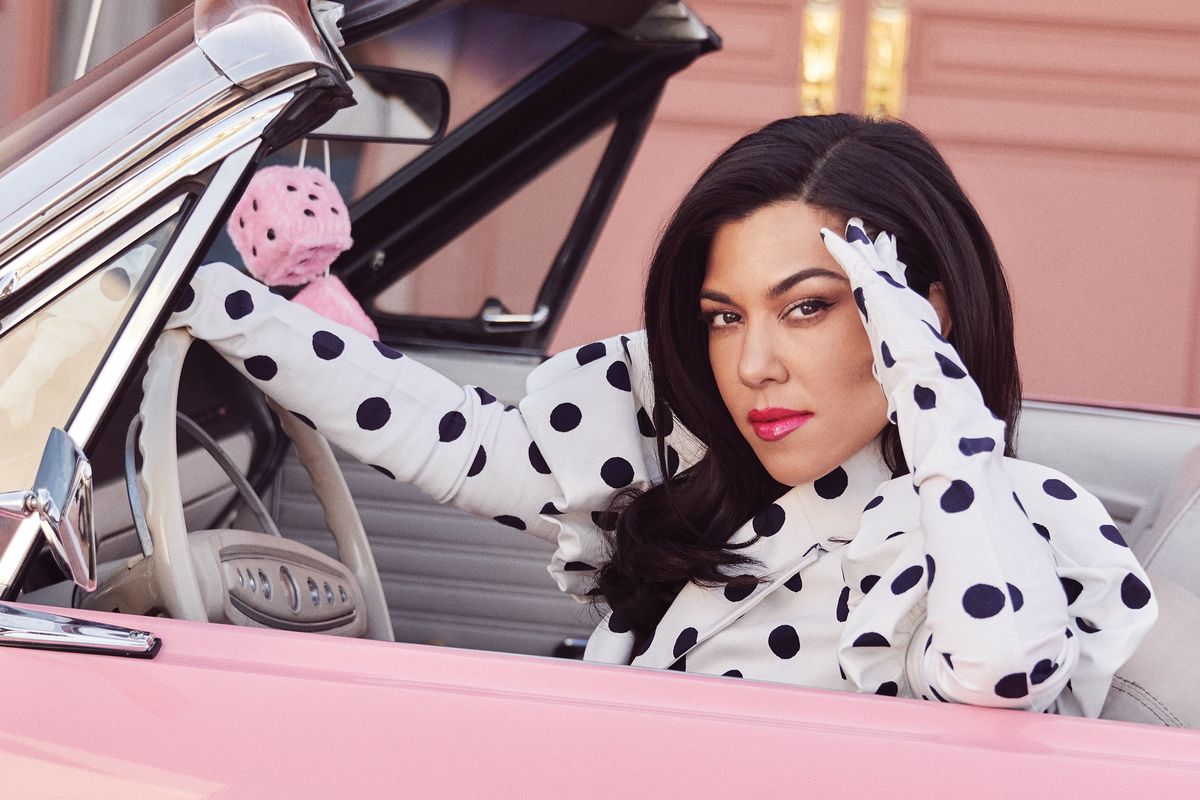 Poosh Calling: Kourtney Kardashian Takes Time Out For Herself

It was 2011, and the Kardashians were on vacation in Bora Bora, where wooden bungalows crouch directly above sparkling ocean. Kris Jenner stood by the water, wearing a fluffy white bathrobe and concerned facial expression. A pre-makeover Kim Kardashian, then married to Kanye West's direct opposite, sobbed inconsolably. Her $75,000 diamond earring was gone.

As Jenner made soothing noises, a cameraman tracked Kardashian's eldest sister emerging from her accommodation in the distance, cradling a toddler. When made aware of the jewelry emergency, she failed to emote anything resembling concern. "Kim," she instead called out in monotone. "There's people that are dying."

That's Kourtney. A blank faced deliverer of sardonic one-liners, like Daria moved to Calabasas and became an Armenian reality television star post-Lawndale. A woman so blasé that she once called off her own wedding without changing facial expressions. Over time she's established herself as the least willing Kardashian sibling, and maybe even the most well-adjusted. Already 28 years old back when Keeping Up started filming in 2007, Kourtney also had a college degree, clothing store, and steady boyfriend. She was the first sister to settle down with children. She has always appeared at least semi-aware of her own insane circumstances — the avalanche of fans but also detractors, whose arguments actually resemble that pithy Bora Bora catchphrase. So many terrible things are happening in the world. Why must we care what these six self-loving women have to say?

Kim, possibly in revenge for the earring incident or others like it, once famously characterized Kourtney as "uninteresting to look at." This is inaccurate. When we meet she's sitting on a makeup chair halfway through her PAPER shoot in Los Angeles, considering a plate of grilled chicken and salad. I dart my questions around a foundation brush, half wondering why we need bother with the glam squad. Kardashian is 40, but her features are soft and youthful, even girlish. She has these huge, expressive eyes that betray the poker face.

"I just didn't really think about it," she recalls of those early days on E!, physically shrugging off the memories. “I never thought it was going to become this thing, but everything just happened so quickly from when we shot the sizzle reel or whatever. It got green lit straight away.” As she says it I watch a lonely cameraman capture B-roll. He has been dispatched to this pastel pink mid century mansion in the valley just in case our interview makes for good TV.

We aren't really here to talk about the show, obviously. Not directly. The Kardashians have long been famous for more than their reality series, having cultivated a number of lucrative side hustles. Kim is an emoji purveyor and legal scholar and '90s fashion archivist, while Khloe is a true crime documentary producer and denim entrepreneur. Kylie is a billionaire lipstick baron, Kendall the world's most in-demand supermodel. Up until recently, Kourtney was the only sister not to have a project, but all that changed two months ago with the launch of her lifestyle website Poosh. Yes, there's still people that are dying, but Kourtney is making content now.

Borrowing the pet name for Kourtney's daughter Penelope, Poosh is a blog with an e-commerce component. There are gift guides and wellness tips and recipes, some of the content having been lifted from Kourtney's now-defunct app. She came up with the concept about a year ago, chatting with her best friend from high school over brunch. "It really felt like there was a space missing that didn't feel welcoming, and non-judgmental. More like a conversation," she says.

Not much of what you find on the website will feel unfamiliar; Kourtney isn't the first mom, celebrity, or Celebrity Mom to write about turmeric on the internet. For those who fall outside of its target demographic, the main reference point for Poosh is likely Gwyneth Paltrow's virtual Yoni egg boutique Goop, and the shared double O (someone in Silicon Valley once told Paltrow that people are more likely to click on a word with soothing repeated vowels) means comparisons are inevitable. But Paltrow's is just one of many incredibly popular wellness and lifestyle websites, and Kourtney says she was more inspired by the competitor Rip & Tan, run by Californian tastemaker Jenni Kayne. Kourtney summarizes Kayne's appeal: she surrounds herself with nice stuff. Curates down to the tiniest detail.

"Even a pair of scissors, she'll have the best scissors you can buy," Kourtney says. Scissors! Also pillows ("tonal textiles"), coffee table books, Italian leather shoes, and ceramic pet bowls. "How I feel is this," she adds with sincerity. "You have one life, so I want to have the best. I want to have the best sponge, the best broom. Things in my house that you wouldn't even think about." Not a hint of that trademark sarcasm.

Whether they're created by reality stars or Oscar-winning actresses or Mormon moms in Utah, websites like Poosh run on recommendation. You're buying what this person with better taste tells you to, or staying at the same hotel they did, or cleaning your house using the same DIY non-toxic cleaning solutions. As a Kardashian, Kourtney enjoys one of America's most aspirational lifestyles, and certainly a messier and more approachable vision of wealth and excess than Paltrow offers. Of course people want to read about it.

"I feel like I'm constantly asked, 'How do you do this? What's that salad you guys are eating on your show?'" she says. "It's nice to share it with people and have that space to do so." Does the multi-millionaire who arrived to this magazine shoot in a Mercedes Benz S-Class worry about her content being inaccessible? She does. "Poosh is about a way to live, not necessarily which items to buy. But I do like having that, too. We just did my favorite table napkins, which are $8. Things for everyone."

Goop has faced criticism for recommending "wellness" items unbacked by science, but its products sell like (vegan, gluten free, organic, farm-to-table) hotcakes anyway. On Poosh you'll also witness the persuasive powers of a serif font and well-lit photos. Studies into the supposed benefits of collagen powder have come up with mixed results, but on the other hand, Kourtney's skin does look really good.

Kardashian is aware of the power she's wielding. "I definitely like to put things on the site that I have tried and our team has tried. We're very specific about what we're recommending," she says. Still, the process of "discovery" forms part of Poosh's mission statement, which means not everything featured on the site is heavily vetted. "We're trying new things we're not so sure about. Just so we can talk about new trends, and what's going on, and our experience with it."

As a publisher, Kourtney's obvious point of difference is access. Poosh exclusives include videos of Kris giving advice about how to "be a boss" and Kendall opening up about her love of modeling. Kourtney's ex Scott Disick, now in a relationship with Sofia Richie, 20 years her junior, engages in a frank two-part discussion about co-parenting their three children.

(Kourtney's surprisingly cordial relationship with both Disick and Richie, she tells me, is "probably the thing I'm most proud of." The three of them recently made headlines for vacationing together with the kids in tow: "I don't think we'll go on every trip together, but I love that I'm invited.")

Those interviews pull in web traffic, but Kourtney would prefer to focus on non-Kardashian topics as a general rule. "I want it to be its own thing," she explains. This is a recurring theme in our conversation: escaping from her family's influence and expectations. There had been a lot of pressure, she says, to start a business as her sisters had done. She'd been reluctant at first.

"I'm happy that I didn't let them push me into what was the right timing for them," she says. "Maybe a couple years back, I almost started a couple different things because I felt like everyone was pushing me." One discarded project included "something with interiors." It just wasn't right. "I feel like this is my thing," she says of Poosh, in a rare burst of genuine enthusiasm. "And I'm happy."

That's a significant admission. Years after the Bora Bora earring incident, during Keeping Up's 2018 season, an increasingly resigned Kourtney complained her sisters were "bringing her down on a daily basis." Kim complained in return that it seemed Kourtney "didn't even want to be a Kardashian anymore," shadily tweeting that "she still wants to live that Kardashian life, though." Searching for answers, Kourtney retreated to Europe with her then-boyfriend Younes Bendjima. Then, straying just as far from Calabasas, she was photographed partying with downtown Manhattan's premier fashion influencer Luka Sabbat ("He is one of my really good friends. And that is it.") Now, with Poosh, she has finally returned home and found purpose.

"It's a new energy," she says. "I feel different. There's something all day that I'm doing. It doesn't leave my mind. Having a conference call this morning, on the way here, it was exciting for me. Having something to keep my brain going. I do feel like that was missing before." Yes, it turns out that dedicating more than a decade of your life — your entire 30s, your children's childhood — to a reality television show can take a toll. But these days Kourt is waking up happier than she's felt in years. "This is something I can make for my kids to be proud of," she says. "It's named after my daughter, and it's hopefully something that can be hers someday."

Kris Jenner found her passion (momaging) at 52, so there's family precedent for this glorious second act. But just because Kourtney has Poosh now, don't think she's not still plotting a more thorough escape. A completely new identity, even.

"I always say I want to move away someday and just be away from it all. Sail away. No one will ever see me again."

"I always say I want to move away someday and just be away from it all," she confesses, so casually, so Kourtney, that the poignancy only hits me hours later. "Sail away. No one will ever see me again." Where would she live? "I keep throwing up different places, but then I'll go there to visit and I'll be like, 'Nope, this isn't it, but glad I came.' We've just been to Finland. And I was like, 'Check, it's great for me to visit, but I'm not going to move there.' Maybe Norway. Switzerland? I've got a lot of ideas."

If the cameras switched off tomorrow, would she be okay with it?