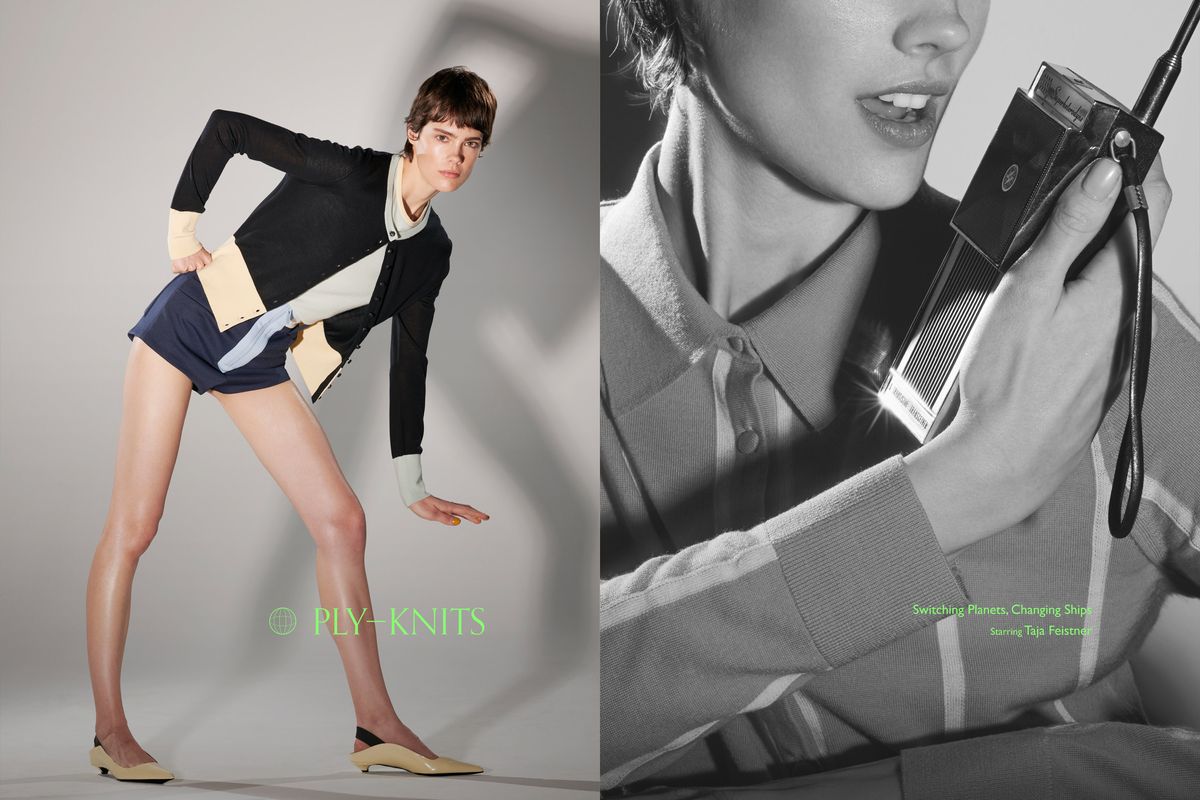 Ply-Knits Looks to Futures' Past in Their Latest Campaign

Knitwear designer, Carolyn Yim has never taken a traditional approach to the family business. A Columbia literature grad, Yim folds in principles of philosophy and art theory into her approach. Yim grew up in Hong Kong, and acquired a deep appreciation of materials from her father at the family's third generation knitting factory. This form the basis for a practice that considers every aspect of knitwear, from the types of dye used to the sourcing of the wool. Meticulously thorough with a deep reverence for the family trade, Yim's Ply-Knits is quickly on track to modernize the way we think about knit.

In the brand's fourth portrait series, Ply-Knits once again takes a highly conceptual approach to showcasing their latest collection. Drawing on the world of classic sci-fi, the photo series focuses less on the genre and more on the era's retro aesthetic. Yim borrows set props from Stanley Kubrick's grand sci-fi opus, 2001: A Space Odyssey, and makes use of some unused archival photos to create this uncanny valley film set where streamlined visions of tomorrow collide with the chic warmth of her knits.

"Harmony ties into a lot of the central themes in science fiction — the idea that technology aids different species to come together through perfect communication into peaceful concord," Yim said. "Technology and social media were meant to bring people together, but they have been divisive and alienating at worst. I looked to different sci-fi books and films from around the world — back when technology was still viewed optimistically, through rose-tinted visors as utopia. I noticed the frequent use of bright, punchy, solid colors in retro sci-fi uniforms and gadgets. There is hope and simple joy in these bright colors."

The collection further explores this tension between technological-optimism and a dystopian outlook with the incorporation of a photographs taken at techno shows and digitally printed on Yim's knits. "Techno is a 'new' form of music. It does not come from the Western musical lineage of Medieval Gregorian chants, religious music, nor uses traditional instruments and song structures," Yim said. "Techno is democratizing. Race, gender, religion, and wealth do not matter at these clubs. Any hint of these old institutionalized power structures is looked down on."

"Techno is democratizing. Race, gender, religion, and wealth do not matter at these clubs."

This method of image transferring is fundamentally flawed, because of the process' inability to print on a curved surface. The end result is a ghostly acid-washed affect the obscures dancing ravers behind a fog of neon light. This butting up against the limitations of the technology fascinates Yim the most, exploring the beauty hidden in its shortcomings.

Take a look at Ply-Knits latest portrait series, "Switching Planets, Changing Ships," below ahead of the collection's full launch later this month.