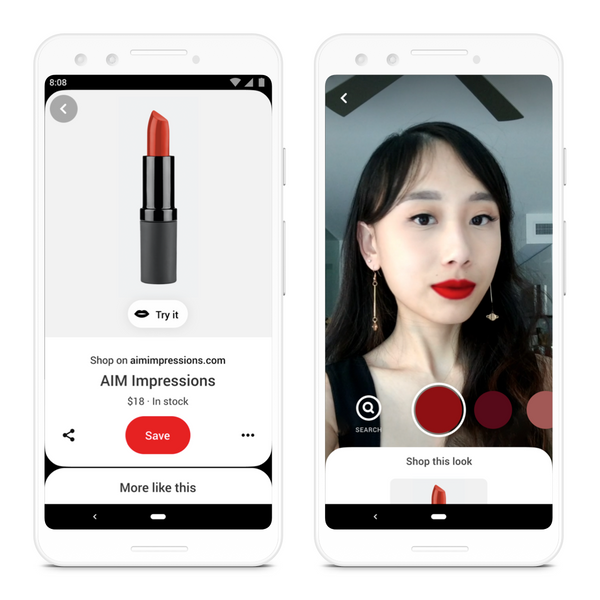 Try on Lipstick Without Stepping Foot in Sephora

Beyond saving their favorite images, making style or beauty boards, users will now also be able to try on their favorite lipstick on Pinterest. With Try On, a new feature introduced today in the U.S, those interested can virtually test a variety of colors from actual brands by bareMinerals, Estée Lauder, Sephora, Neutrogena and L'Oréal's NYX Professional Makeup, YSL Beauté, Lancôme and Urban Decay.

All you need to do is turn on the selfie view on the Pinterest camera or find item results that have a 'Try It' button. You can then either save the look, buy the product if you like it, or try on more looks.

The innovative feature, reportedly a year in the making, will work as an extension to Pinterest Lens — "a computer-vision tool that can search the platform for ideas by using the camera to identify objects, from buildings to outfits, in the real world." reports WWD.

"We actually saw a lot of people taking selfies with Lens. But when you're looking at yourself, the best experience isn't necessarily to show you other people that look kind of similar to you, or to show celebrities that are similar," Jeff Harris, Pinterest's head of visual search, told the outlet. "What people often want to do is figure out what kind of inspirational stuff they can do in their own looks. And this try-on feature is really an answer to that."

Related | This App Matches You to Your Perfect IRL Foundation Shade

"We heard from Pinners who wanted a way to try on new looks for happier purchases they won't want to return while mobile shopping," the company added in a press release. "They also wanted ways to explore looks without the anxiety that may come with trying something new at a store or buying a new product online they haven't tried."

Pinterest isn't the first platform to introduce an AR-enabled makeup feature. Companies such as Sephora, Estee Lauder among others have all debuted their own versions of services that allow you test foundations from a number of different brands.

The new Pinterest feature only further indicates how different the landscape of modern beauty might be in the next decade.