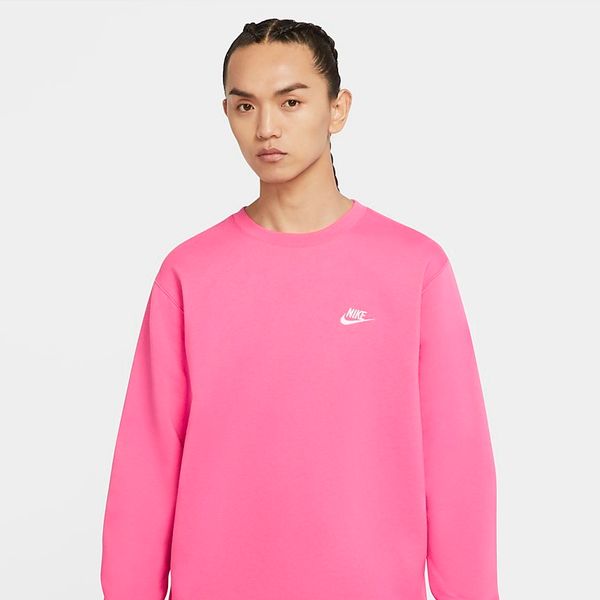 Do Straight People Know About the Pink Nike Sweatshirt?

"Are you wearing the —" "The pink Nike sweatshirt? Yeah, I am." Such has become the refrain for a small but mighty sizeable pocket of the internet known as Gay Twitter™. Like the strawberry dress on TikTok, a seemingly unremarkable clothing item has achieved unlikely ubiquity.

The Nike Sportswear Club Fleece, priced at a reasonable $45, is about as elemental as a garment can get: a fleece sweatshirt with an embroidered logo on the left upper chest. The sweatshirt comes in 18 colors (two of which, excluding the pinksicle colorway as it's referred to on the site, are sold out). The sweatshirt is less distinct in its style than it is its sizing, of which 15 variant options are offered ranging from SX to 4XL Tall. So why, like Chris Pratt before it, are we talking about something so seemingly banal?

The story began on September 16, when writer Alex Abad-Santos tweeted, "please give me recs on your favorite hoodies and sweatpants. I need new sweatpants and hoodies that are different than the sweatpants and hoodies I already have." "Nike Sportswear, baby," writer and podcast host Phillip Picardi tweeted in response. Abad-Santos heeded his friend's advice, the clothes arrived arrived, he posted a selfie in the get-up and went on to be credited along with Picardi with helping the trend lift-off. "Pink is my favorite color, and I was immediately sold on the Barbie Malibu dream house color," he says of the purchase.

For Picardi, it was less about starting a trend and more about convenience. At the beginning of the pandemic, while others were flocking to Entireworld for their sweatsuits, Piccardi, who is 6'2" and around 205lbs, needed something that actually fit ("I don't know who those sweatsuits were made for, but it wasn't for me. One wash, and those bad boys were capri pants"). He turned to the relatively unknown upstart brand Nike and ordered everything in pink — shorts, joggers, hoodie, sweatshirt — while his husband ordered the same in pistachio. The rest is history.

"I love that there's an obsession with the designer sneaker, the designer track pant, the designer hoodie," he says. "It amuses me because sometimes you really can't fuck with a classic. There are just some things Nike does better — and some things that fit a broad range of guys a lot better. And, it still looks cool. It looks stylish without being Fashion. I think this sweatshirt is a good example of that."

Abad-Santos agrees, also citing the bubble gum pink as a key reason why gays in particular have made the sweatshirt a must-cop. "I'm not a fashion of gender scholar, but I do think that there's probably some resonance in a very proud pink sweatshirt, and many gay men who were probably told at a young age that this color is off limits," he says. "Implicitly, it's the idea of challenging traditional ways we think about masculinity."

"But maybe it's not that deep," he also considers. "It's fashionable, and it's an objectively cute pink sweatshirt. That's more than enough for homosexuals."

It's true. Just look at the phenomenon of the Gucci belt of the early aughts or, most recently, the Zara striped shirt ("which can leave men looking like extras from a university production of West Side Story," wrote VICE's Daniel Rodgers) as examples of trends created, bolstered and ad nauseam'd by gays. Is the pink sweatshirt another example of this, destined for destitute? Or is there potential staying power? Could it become the sartorial iced coffee within the gay starter pack?

The difference in this case might be a global pandemic. "I do think that there's probably a few pandemic factors at play, like how we can't shop together anymore or that we feel lonelier now," says Abad-Santos. "And maybe it's friendship-affirming and something that makes us feel a little less lonely or a little less distant, when your friends — online or real life or both — can get the same cute pink sweater." Maybe in this instance it's the alchemy of cute, affordable and connecting.

it's a pink nike sweatshirt and hide under my weighted blanket kind of day
— David Oliver (@David Oliver)1603643244.0

Plus, there's the fact that just about everyone looks good in it, as is of the proclivity of a sweatshirt's life. That certainly helps. Also: "The gays love an outfit," says Keep It host co-host Ira Madison. "We're prone to cult behavior. And it is cute and sporty." Picardi agrees. "It looks '80s in the best kind of way/ I hope to see it on all these boys with Paul Mescal short shorts and high socks and high tops — jockstrap optional. Then you can really live the locker room fantasy." *insert Monique I_would_like_to_see_it.gif*

Okay, but do straight people know about the Nike Pink Sweatshirt? I dunno for sure. Only way to find out: Vote. For more information: https://iwillvote.com.