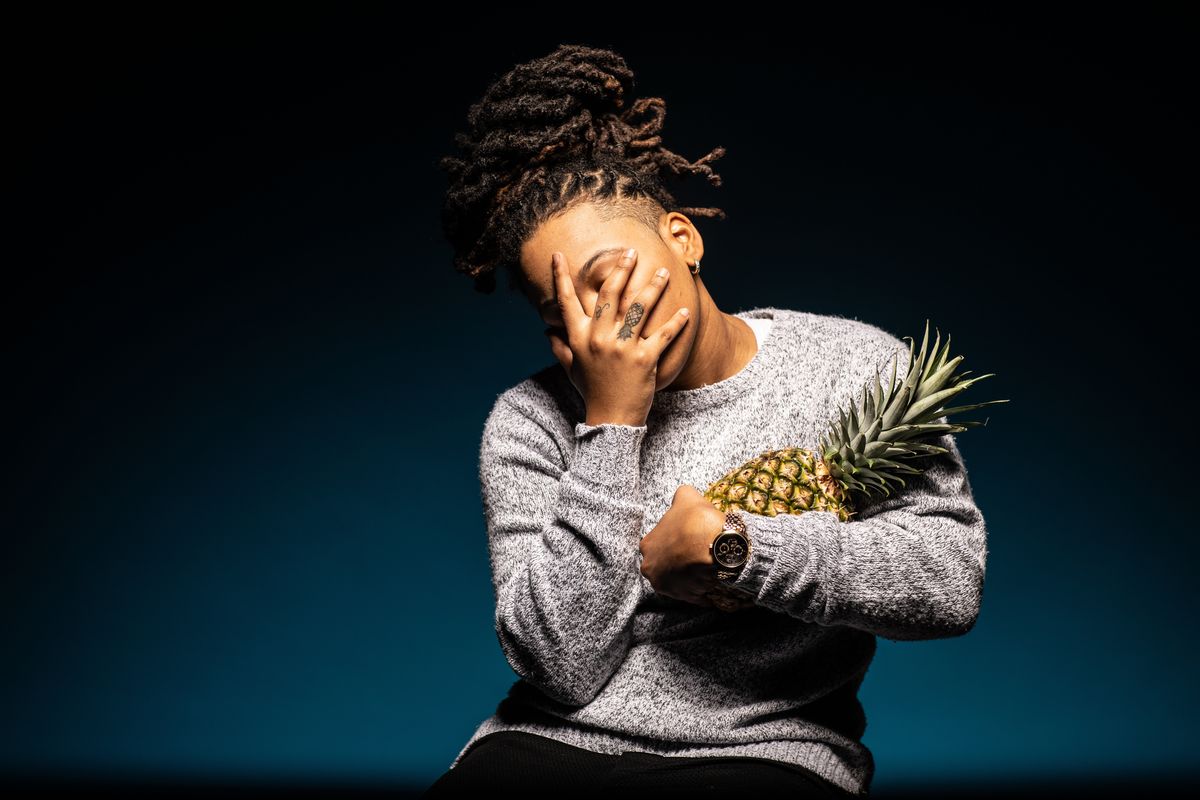 PineappleCITI's 'I Need a Coupe' Is a Manifestation Mantra

"I feel like I'm everything Trump hates: I'm young, I'm Black, I'm gay, shit I'm disabled and that makes success all the better," New Jersey-bred rapper PineappleCITI says. The bombastic and unrestrainedly optimistic verses of "I Need a Coupe" are certainly an unapologetic homage to the perks of being successful — CITI rattles off a list of desires as if checking off boxes on a hedonist's Christmas list. Yet the insatiable need to have — the song's prevailing theme — reaches far beyond material trappings.

Two years ago CITI had a life-changing brush with death, one that saw her living out her own personal "Through the Wire" moment; the impact of the car accident still affects her life today. While in rehabilitation for injuries to her legs, neck, ribs and more — a process that took most of 2017 — her singles "Rose Colored" and "Pepsi" began creeping onto East Coast radio rotations. "I literally had to call into the the Breakfast Club and rap over the phone to Charlamagne and Angela Yee from the rehab center," she recalls. Around the same time, a video of Chris Brown's dancer Kida the Great performing to "Rose Colored" went viral. Instead of being able to celebrate the small victory, she was bed-bound in the hospital. And then, another unexpected monkey wrench: 50 Cent's single "On Something."

The song sounded so uncannily similar to CITI's own sleeper hit that many were hard-pressed not to believe it wasn't a product of a sporadic series of emails between 50's management and CITI, starting in March, 2017. Initially, there was talk of collaboration from 50's camp, but before long the messages tapered off. And then, in September 2017, "On Something" debuted on 50's short-lived BET show, surprising CITI in the midst of the fallout from the accident. "It was a learning experience," she shared. "I went into the industry kind of green. I was the happy-go-lucky type who thought if you make great music great things will happen to you. In the grand scheme you'd wish that to be so, but that's not always the case."

She continued, "It was just a super weird time for me. My song was going crazy. Everybody is calling me, but I'm also very injured. I have people asking me to do shows and open tours when I can't even walk. For a lot of people there is one moment, or a maybe a collective of moments, that shapes who or what they become. Those moments really changed my life because I stopped living for everyone else and be who I really was, and that's an artist."

The year before, in 2016, CITI had another life-changing moment. Having put a pin in her musical aspirations, she was working in a daycare center in Newark, New Jersey. "I would make up songs for the kids and one day one of the teachers was like, 'Man you sing really well. You should sing to the kids more'. At that moment I said, 'I'm out. I can't do this anymore.' I always knew music was a passion but I finally realized that I owed it to myself to take it seriously. I quit my job that day and two weeks later I met my producer Fre$h."

"I feel like I'm everything Trump hates: I'm young, I'm Black, I'm gay, shit I'm disabled and that makes success all the better."

The duo, who work together still, entered into an exchange that CITI sees as nothing short of serendipitous. "I was super broke at the time and he was on the come up too, so I literally exchanged the studio equipment I'd just bought for him to make my album. I felt like it was God because I had the exact studio equipment that he wanted."

Lyrically, much of CITI's repertoire is underpinned by that very same unshakeable belief in the power of fate. "I Need a Coupe" is literally a manifestation song," she shared with a laugh. Having overcome and outmaneuvered a literal series of unfortunate events, and emerged the wiser for it, it's easy to understand why these experiences stand as a testament of the capacity of destiny. In a culture obsessed with enrichment — whether financially, emotionally or spiritually — it's an ethos that appeals.

Watch the PAPER premiere of PineappleCITI's "I Need a Coupe," below.