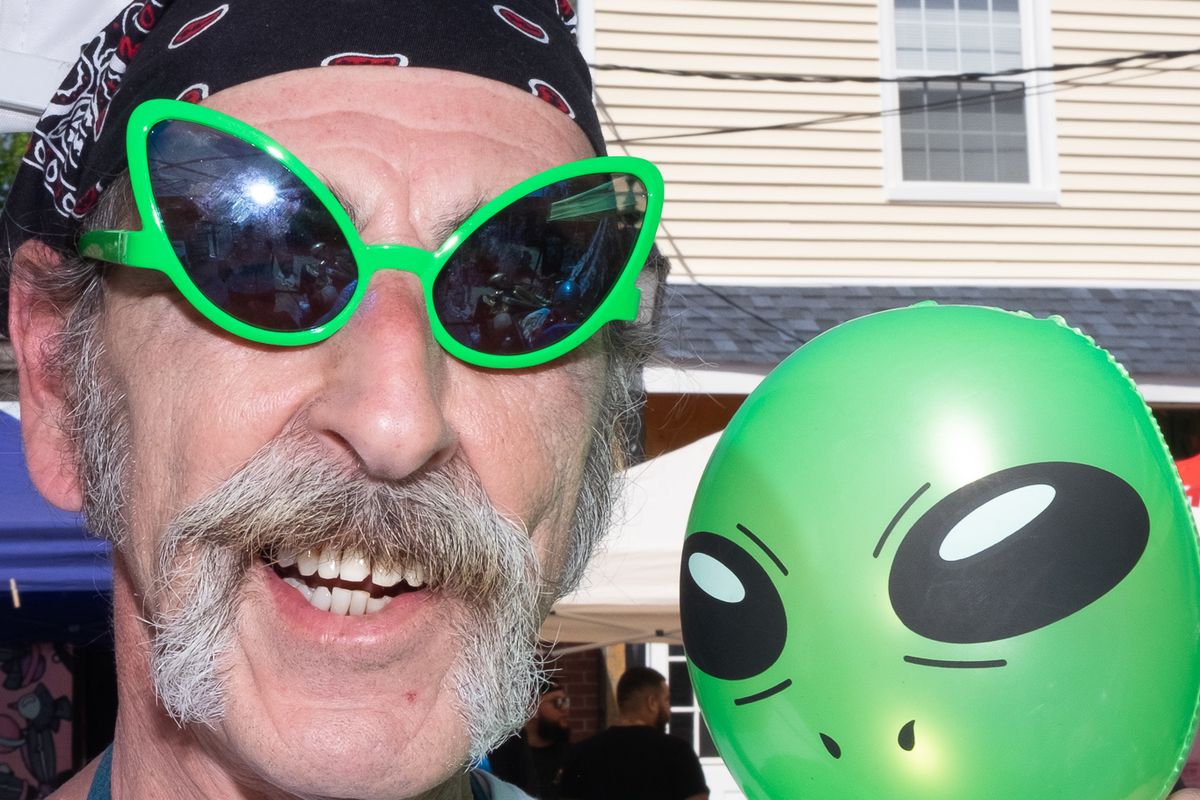 With thousands of extraterrestrial vessel sightings within the last 10 years, New York's Hudson Valley is currently experiencing a UFO wave that it's not seen since the '80s. This makes it the perfect time for the small town of Pine Bush to throw their 6th Annual UFO Fair.

One Saturday in May, for the last six years, the Pine Bush UFO Fair completely takes over the small Hudson Valley township. Main Street is lined with alien-themed stalls selling trinkets, candy, t-shirts and thousands of inflatable aliens nearly doubling the town's population.

This year's fair was a real who's-who of "alien culture;" one of the bigger names in attendance was Travis Walton. Abducted by aliens in 1975, Travis is the subject of the surprisingly popular movie Fire in The Sky, which has a 6.5/10 IMDB rating. I tried to grab Travis to chat about his experience with the aliens and what it's like aboard an alien ship, but he was quickly snapped up for an interview by Fox News. Minutes later, I ran into Ronald Tolvtvar of ERRT Radio, a die-hard believer and UFO expert, who told me that not only did aliens exist, but that they were among us in Pine Bush, and almost impossible to distinguish when disguised as ordinary folk.

Related | Inside the NYC Cannabis Parade

Music fan? The UFO fair had that covered with its four stages dotted around the town like little musical crop circles. Within the space of 30 minutes, I managed to catch a teen alt-rock band named Masters of Destruction, an alt-rock singer called Israel Sanchez and an alt-rock band named Blue Alien Mystic, fronted by an actual blue man (note: no relation to The Blue Man Group). They played three sets throughout the day, including tracks called "The Other Side of Space" and "Failure is my Mentor."

The penultimate moment of the day, however, had to be the Best in Galaxy Adult Alien Beauty Pageant. Attendees flocked to the Center Stage to witness history be made, and they were not disappointed. The pageant was a hotly contested battle between space beauties including a green lady with tall hair, blue lady with purple hair, a transformer, and the Alien from Alien, the eventual, deserved winner of the contest.

Aliens aside, the fair provided a beautiful and pure look at humanity, with nearly a thousand people coming together under a shared belief to celebrate the quirky heritage of a beautiful town in upstate NY. While I'm not sure I've been convinced of alien life, I know that I do believe in the Pine Bush UFO Fair.