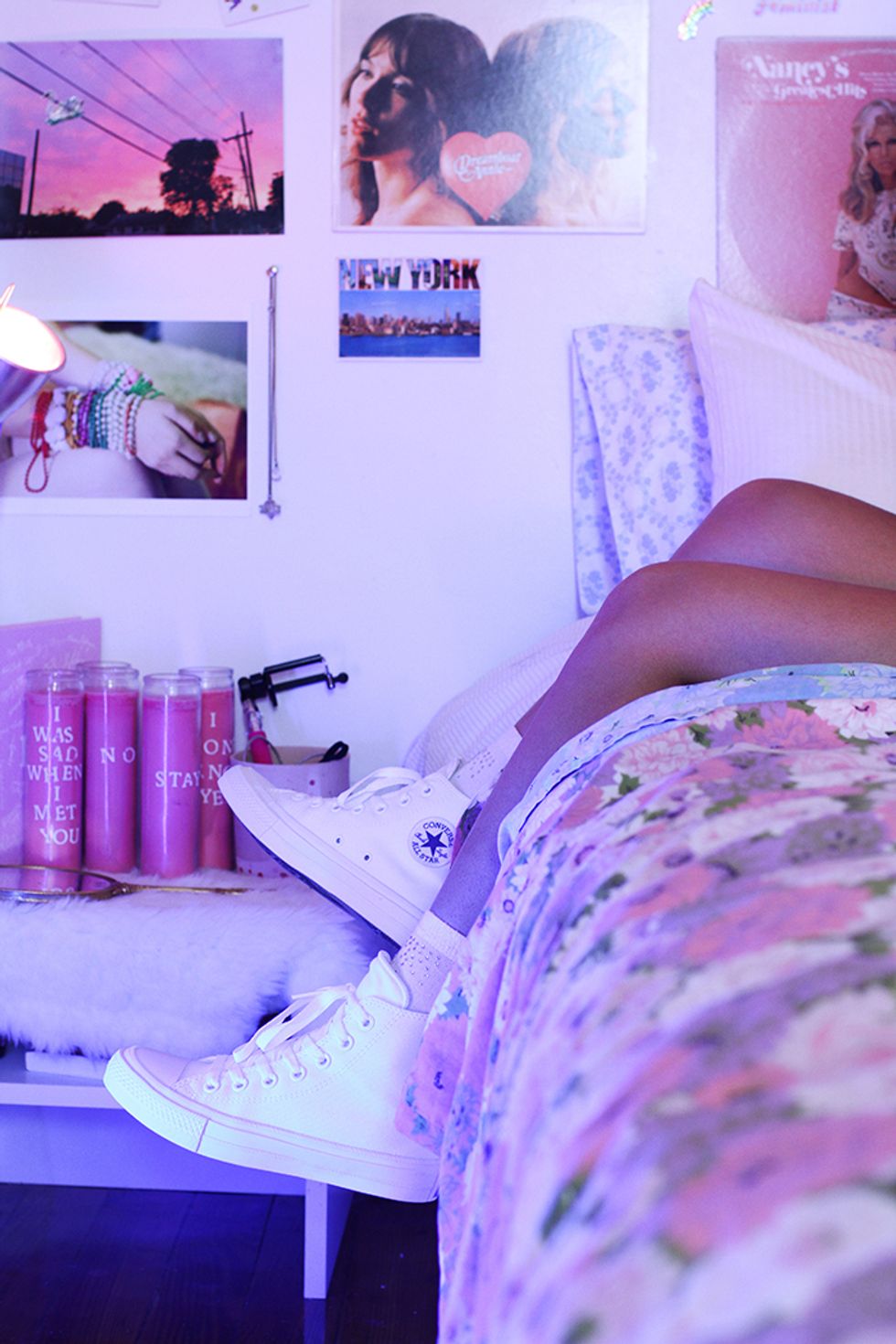 "When I create things I want to make sure when people see it they feel better about themselves," says photographer and designer Mayan Toledano. She's always thinking about how to tell stories and connect with the world, whether she's creating sets for her own photographs or for music videos for bands like Garden City Movement, or coming up with ideas for the feminine and feminist clothing line, It's Me and You, that she started with her best friend, Julia Baylis. We talked with Mayan about the importance of bedrooms, being a woman and an artist, the art of the selfie, and former teen heartthrob Leonardo DiCaprio.

How did you get started as an artist?

I actually grew up as a dancer. That was the first form of art that I was able to express myself in. But when I was 18, I quit dancing because I felt like I don't get enough support and I started seeing the negative side of it, in terms of what it is to be a female dancer. I went to fashion school, and there I realized that that was really unsupportive too, and I wanted to do something really different. I would collaborate with my best friend Julia Baylis, and we started It's Me and You together. We wanted to create better, more positive imagery for young women and young girls, and create something that we felt was lacking in the fashion industry. We just kind of made things for ourselves and for our friends, and the community here, and when we posted things online, we got really positive comments from people all over the world. I just want to make sure that I create the things that I don't see.

You do a lot of work as a set designer, and you create these really dreamy, soft environments.

I think that I'm attracted to certain colors, like pastels, and something that is kind of out of reach, as far as being dreamy. It's like going back to nostalgia, something really sweet that I like to revisit or escape to. Because escapism is also a part of my work and how I view things.

What are themes that you look to when designing a set?

I always feel like I keep going back to the aesthetic of teenage bedrooms and bedrooms in general. The bed is a big place for me. That's where I am creative. Your bedroom is the first place that is your own and private, and it's your first place to be creative. So you put posters on the wall and a photo of your muse or someone you admire or stickers or whatever you're into. And my bedroom was always like that. It inspires me and I feel like there's something really vulnerable about it and really personal. You create a story for someone. Like the music video I did for Garden City Movement, I made a room full of Leonardo DiCaprio posters.

Who wasn't like 12 years old and in love with him?

What's the craziest thing that's ever happened on a shoot you've been on?

Me, Petra Collins, and Julia Baylis went on a road trip that was filmed. Because we're all so close and our friendship is very much like sisterhood, it became really crazy. We got into really insane fights in front of the camera. Of course the camera guys and the producer, they were all guys, and they just don't get it. We were screaming at each other. We had to go and we all cried and made up. So the second we left the room we were all like, happy, laughing, and were being just normal and they were shocked, basically. They don't know where it came from. Because it was like, a volcano, and then nothing!

You mentioned earlier that dancing and fashion weren't really supportive industries. Do you find it's hard to be taken seriously as a woman artist?

It is harder, especially in the set environments, like either photo shoots or films, because when a female is responsible, or demanding, or knowing what she wants, you'll be called bossy or bitchy or names like that. And when males do the same thing, they're like cool and responsible and someone to look up to. I do see that all the time on set. And it's something I don't really struggle with because, at some point, I just kind of stopped caring what people think. I'm more driven by what I want to do and how I want to see things. But it is definitely still a thing.

There's being dismissed because of being a woman, but I feel like there's also some dismissal, at least from older generations and the media in general, about millennials and young people. Do you see that as an artist and part of the millennial era?

I think that with the internet we're able to put our work out there and get immediate response and find our own community. Even selfies--selfies are a form of art! Selfies are like a way for us to accept ourselves. Because we're real people. We're vulnerable, we cry, we have dimples, we have cellulite. We are real beings and we post about it and we have no problem being exposed like that on the internet. When I see a teen girl's selfie, or anyone's selfie, I want to support it. I don't want to hate on it, I just want to be like, cool.