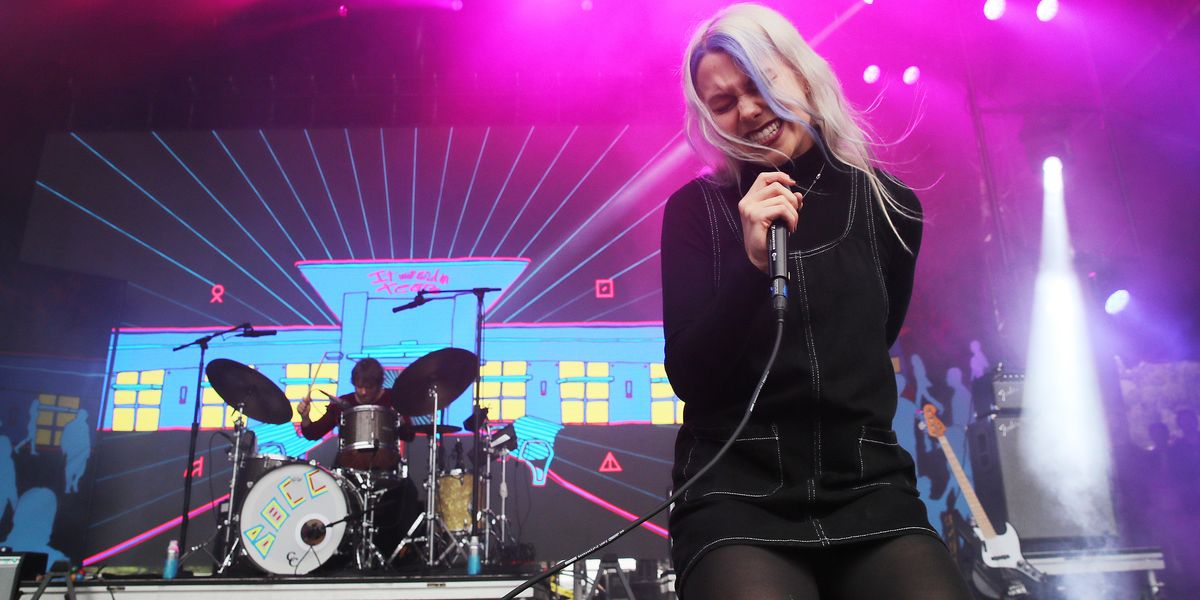 Who other than Phoebe Bridgers could tackle apocalyptic symbolism and the grimness of our capitalistic world, all while in an effortlessly cool way?

Today, the acclaimed indie folk rocker shared the cinematic new video for "I Know The End," her haunting and poignant closing track to her recent LP, Punisher, released last month.

The Alissa Torvinen-directed video opens with Bridgers seen fully clothed in a filled bathtub, singing directly into the camera. She then washes her hands thoroughly, ridding them of a black color. "Like a wave that crashed and melted on the shore/ Not even the burnouts are out here anymore," she softly sings over reverberating, subtle synthesizer notes and deep, submerged electric guitar licks, "And you had to go/ I know, I know, I know."

Donned in her signature fit — a skeleton onesie and Dr. Martens boots — Bridgers wanders through the LA Memorial Coliseum meeting eerie yet weirdly comical folks along the way. A magician shows his deck of cards to the camera, a seemingly friendly young girl in white tosses her an apple, and a plethora of gothic, fairytale symbolism is shown throughout.

Bridgers' lyrics are profound and descriptive of capitalistic US; She details her experience hearing an "America First rap country song," and seeing landmarks such as a "slaughterhouse," "outlet mall," "slot machines" and a collective "fear of God." She plays with the meaning of "ghosting" her friends, and her song's subjects fear a "government drone or an alien spaceship," realizing they are never truly alone.

Violin solos and blaring trumpets support Bridgers' wistful vocals as the tempo increases. She is then seen escorted by people in dreary monochromatic uniforms onto the back of a moving vehicle. They drop her off, and quick shots depict her running for her life before switching to rapid clips of her appearing to drown in her bathtub.

"The billboard said The End Is Near," Bridgers sings as the video and song conclude. Highlights of the visual's end include watching her and her band perform in a nearly empty stadium, as the crowd consists of practically 10 people. The instrumentation all comes to a crashing end. Bridgers makes out with an elderly woman. Together, they scream into the ether, making "I Know the End" a great dystopian, quarantine anthem to blast at the end of the world, if there ever was one.