Phoenix and Passion Pit Park It

I'm not ordinarily one for outdoor concerts, but Phoenix and Passion Pit playing Central Park proved a no-brainer. I’ve probably never thought about anything less than nabbing tickets to this very affair. This talent-laden double-whammy spanning the weekend (Friday and Saturday nights) was the premiere event of the summer -– in autumn. Or so it felt. Under the clear sky, crisp air making it okay to cozy up in cashmere, my friends and I stood amid fellow fans and basked in the collective excitement, ecstatic energy wafting across the field. The moment had finally arrived and we couldn’t have been more comfortable, for once, feeling like we were back in college. Only, on this occasion, the evening surely wouldn’t end with one of us wrapped around a frat house toilet and dreading the term paper due date looming Monday.

“Doors” were set at 6 and Passion Pit took the stage shortly after 7. “Let’s warm this place up a bit!” they said soon after entering. The Boston-based quintet performed a full set of 12 or so songs, including some new ones. Not too shabby. Now, don’t get me wrong, I adore Passion Pit, but their performance Saturday was somewhat lacking. They’ve got such stage presence and instrumental skill that to witness the disappointing production was difficult. It was one of those “their record sounds different -– and significantly better than this” deliveries. While I love them and listen to their album, Manners, incessantly on my iPod (hear “Moth’s Wings” and “Swimming in the Flood”), by track eight or nine this girl was itching for Phoenix. Though, I must admit, lead singer Michael Angelakos sure does know how to break it down; not only with his signature high-pitched vocals, but also when he single-foot shuffles forward and backward, oftentimes crouching, mic and chord swinging in hand, lasso-like, whilst sweat soaks through his shirt. It was just unfortunate his voice didn’t quite measure up to the disc ditties. He did adopt the rocker role, though, lifting the mic stand and pointing it at the audience. “Here’s a way to make tonight even better than last night,” he said, as they ended with “The Reeling.”

At nearly 9 our favorite Frenchmen made it onstage. It’s difficult to top Phoenix –- and their live version has, to my knowledge, rarely, if ever, threatened to disappoint. This instance was no exception. The brothers, Christian Mazzalai and Laurent Brancowitz, lost their father this month and it was inspiring to see them temporarily surmount this tragedy and play on for the sea of devotees. The foursome, accompanied by their rockin’ drummer, Thomas Hedlund, an essential element but not technically a defined bandmate (as well as a second drummer/keyboardist to whose name I am not privy), performed about 13 tracks, opening with the expected “Lisztomania” (which no doubt gives rise to legitimate Phoenixmania) and bringing the evening home with “1901.” Between the poles of their most well known numbers they threw in new and old alike, including “Run Run Run” and the third part of “Funky Squaredance” (yum!). And, to my surprise and delight, unlike last time, at Terminal 5 back in June, this special occasion made room for my personal favorite, “Fences.”

After withstanding more than enough time amongst the combative but essentially harmless crowd, my friends and I joined Glassnote (record label) folks, as well as leather jacket-clad Mischa Barton, in the VIP section. I mention this solely because it was from this angle that I was adequately able to observe Hedlund attacking his set. Sickest percussionist award goes to He would sit, then rise and, more often than not, his sticks, hands and arms became little more than a blur of beige, tan and off-white. He is gifted beyond comparison. The original cast of characters didn’t hold back either, Mazzalai stomping around, strumming the hell out of his guitar, while the red-scarf-white-tee-bearing Deck D'Arcy balanced bass and mini-keys with precision and poise. Leading man Thomas Mars was on point, too, never faltering as he limberly glided around the stage. All together the four amazing men and their indispensable honorary members made the kids cheer, arms in the air. On top of phenomenal sound, the lighting and its timing were just right, and we probably have some young hired hands to thank for that. So, thank you, young hired hands. Things wrapped up just as the rain came. Perfect timing.

Bottom line: Phoenix knows what it takes to translate amazing music into an all-out assault on the status quo. Can’t wait ’til next time. 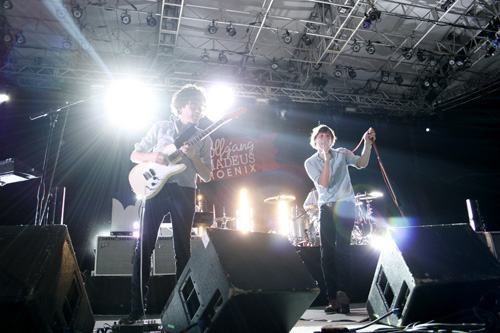 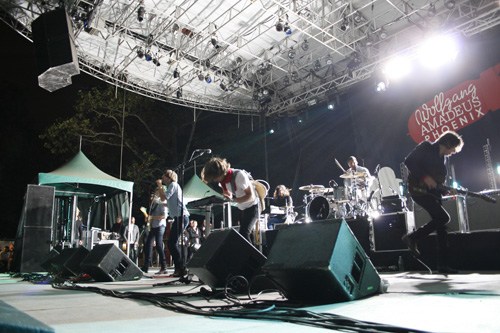 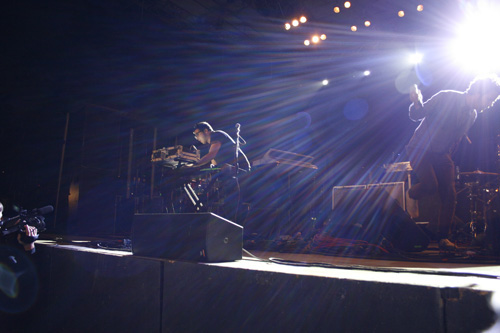 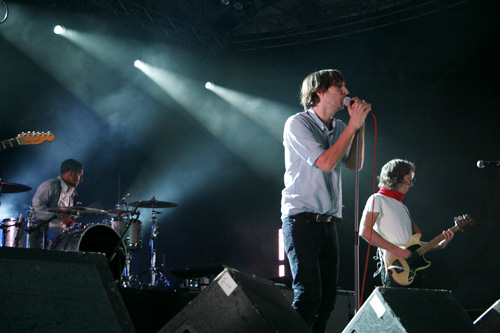