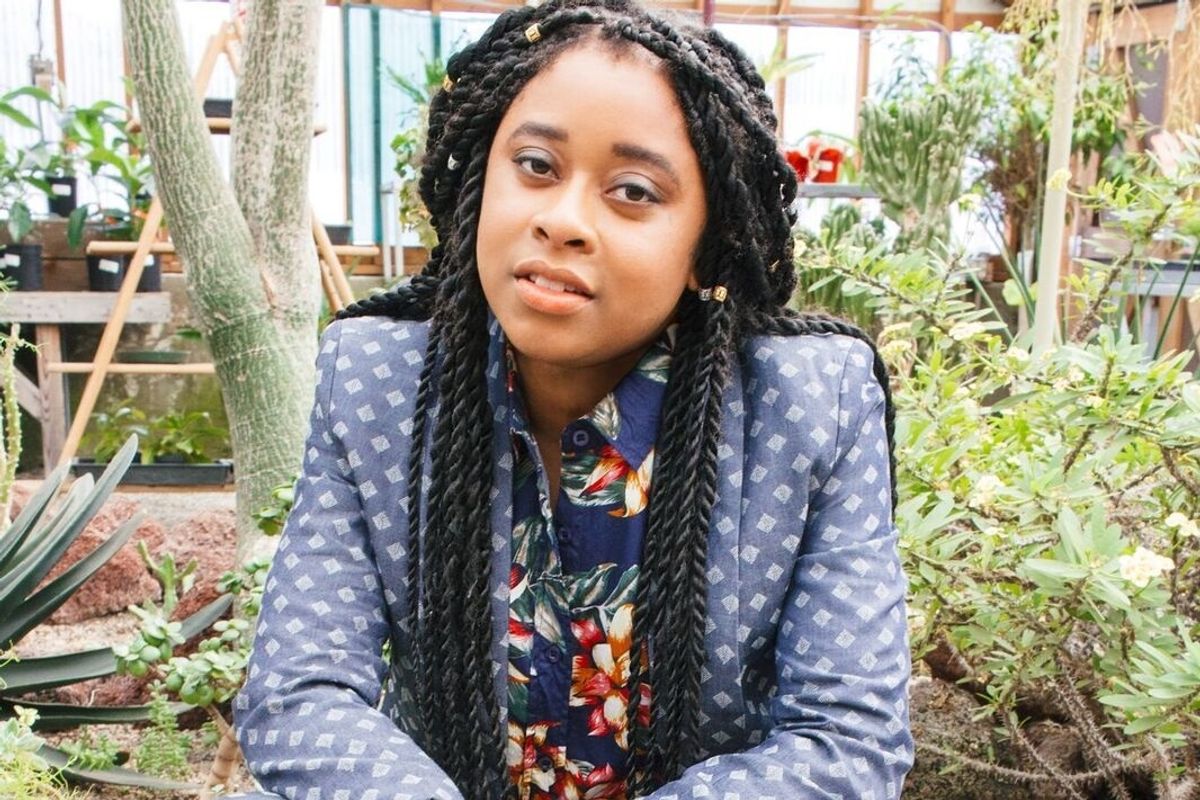 Everything's Trash, But It's Okay: We Have Phoebe Robinson

She's a comedian, actress, author, podcaster, and producer, collecting accolades like I collect unlistened-to voicemails. Phoebe Robinson has probably made you laugh in one of approximately 12,000 ways: Be it through one, or both, of her podcasts, 2 Dope Queens (the other dope queen being the hilarious Jessica Williams) and Sooo Many White Guys, the former recently being turned into an hour-long HBO variety special, her New York Times bestselling essay collection, You Can't Touch My Hair: And Other Things I Still Have to Explain, and/or her role in the Netflix film, Ibiza, which co-stars Gillian Jacobs and Vanessa Byer, in addition to the myriad gigs that punctuate her time between projects.

But she's not losing steam anytime soon. Her sophomore book, Everything's Trash, But It's Okay, out now, details life after the election, tackles subjects like white feminism and society's unrealistic beauty standards, and chronicles her struggle with debt and her burgeoning relationship with her boyfriend, whom she has affectionately dubbed as #BritishBaekoff, all while vacillating between the hilarious and thought-provoking to deliver a signature body of work that can only be born from the mind of Phoebe Robinson.

PAPER sat down with the unequivocal queen of multi-hyphenates to talk about her second book, which went from interview to impromptu therapy session because talking to Phoebe, even if you're talking to her for the first time, feels like talking to an old friend. We chatted about life since the election, relationships, career, debt, and experiencing each of these facets of life as a Trash Person™️, below.

So many things have happened since your first book, many of which you've chronicled in your upcoming one. How did you end up deciding what stories to tell?

Whenever I write I want my essays to be a snapshot of what's going on in my life at the time. That helps me center the storytelling. For example, the story about me coming out of debt was happening right as I sold the book, so I was like, "Oh, I should write about that." I started dating #BritishBaekoff so I wrote about that; it was just taking all these things, whether they were highs or lows, and capturing them at this specific time in my life.

Your last book, You Can't Touch My Hair, was published in October 2016, so about a month before Everything Went Wrong. How has your writing process changed since?

[Laughs] I think I just want to be as honest as possible, especially since the election. I want to just say everything that I'm thinking and not really worry too much about pissing someone off. I'm thinking about the essay on white feminism and the Women's March in particular right now. At first I felt super triumphant about it, but when I sat down to write about it, I realized that that wasn't the only emotion I had, and I thought that maybe I was a little dishonest in expressing the totality of what I felt about the Women's March. I just felt like it's good to be honest about this moment, because it can't just be all "rah-rah" without also being truthful.

"Acknowledging that you messed up or made a mistake helps you come out on the other side smarter and wiser."

In the beginning, you mention that embracing our trash — and I don't mean our literal garbage that's accumulating under our desks and in our kitchens — can be a form of liberation. Tell me more about that.

We live in a moment, especially because of social media, where we try to present the best version of ourselves: how we're always killing it or how we always look cute and know how to contour our noses perfectly, and, while that's nice, it's also making people feel like crap, because then we feel like we're not measuring up to this or not measuring up to that. So when I came up with the title, I was just thinking that I could talk about how feminism isn't completely on point, that there are still many issues we need to address, or I that I could talk about how I was fully garbage in thinking that money would never fully run out for me, which, as you read, did, or that I was never going to struggle. I think owning up to my own mistakes and saying that I'm a little bit trash too helps everyone realize that they don't have to pretend that their mistakes, or the things they've said in the past, don't exist and don't have to succumb to the pressure of living this perfectly curated life. I think acknowledging that you messed up or made a mistake helps you come out on the other side smarter and wiser, and prevents you from repeating that mistake in the future.

How do you approach writing about people that are close to you, especially when they're imperative to your narrative? How do you tell that story without the trepidation and anxiety that comes with knowing that that person may or will read it?

That's a great question. I will say about the essay I wrote about meeting my current boyfriend, whom I refer to as #BritishBaekoff, that I wanted him to read it and make sure he's okay with it because he works in music and wants to maintain his sense of privacy, especially since he's dating a public person like me. I wanted him to be on board with it.

I think when it comes to writing about interactions, especially interactions with high-profile people, it's about sticking to the facts as much as possible, and if there is any color commentary, it's really about me. Like when I wrote about Julia Roberts and her family teaching me how to swim, I wasn't like, "Let me just talk about her kids," because that wasn't pertinent to the story. I wrote about how I was scared to be in the water, and as long as I'm relating it to me, I'm still respecting her family's privacy.

I think almost every creative struggles to remain present and enjoy what they have, which is something you touch on in this book. How do you take a step back and admire the view from time to time?

It's hard for me because I'm always on to the next thing. I don't want to get too caught up in doing the victory lap but there comes a point where I'm not appreciating the fun moments. You can't only enjoy working all the time or struggling to get to where you want to be. I think, for me, it's a process that I'm constantly working on. I don't have to have a freaking parade every time I achieve something, but I can celebrate in different ways, like treating myself to a concert or a piece of cake if I wrote something great. I can go on a vacation for my birthday; it doesn't mean I'm not a good worker, it just means that I can enjoy the fact that I can afford to go away. It's just about finding balance and not letting the work consume you; it shouldn't be your sole purpose, it should be a thing that brings you joy.

I haven't read many essays on money (the other recent one that comes to mind is in Alexander Chee's How to Write an Autobiographical Novel) but your essay hit me the hardest. How do you stop letting your money (or lack thereof) rule you without any detrimental financial repercussions?

For me, I had to first approach it from a mental point of view. There was a time that I was $60,000 in debt, and I had to untie my self-worth from my bank account. I think society makes you feel like if you don't have x amount of money in your bank account, you're failing; if you're not doing this at this specific moment of your life, you're fucking up. You become to invested in money but not in the right way, where you'll be like, for example, doing all these stand-up shows but not making a ton of money, and you might conclude that stand-up is a waste of time instead of realizing the value of practicing of stand-up and what all that practice can mean for you down the line because you're focused on your current monetary situation.

Not feeling like a failure because my bank account didn't look a certain way was the first step. The next step was just living more honestly; if I had to opt out of something because I couldn't afford it I would be honest about not being able to afford it. Then comes having to be practical and locking stuff down, things like not charging stuff to your credit card if you can't already pay off and it took me a solid two, three years where I had to dig myself out of this debt, and it wasn't fun — I hated it and I was so stressed out — but what helped was realizing that this problem wasn't insurmountable. After I took these steps and took the time to reevaluate my financial choices and what I could and couldn't afford, I realized that I was more capable of digging myself out of this than I thought.

I think you just added financial guru to your string of multi-hyphenates. In addition to ones you already have, what's the next one you want to tack on?

[Laughs] I really love working in publishing, but I do think it's overwhelmingly white, male, and straight, so I think the next thing I want to do, maybe in the next couple of years, is to start my own imprint. As much as I love writing books, I want to help other people get their foot in the door. My publisher, Plume, was the only publisher that wanted my first book; no one else was interested or got it. You really just need one person to believe in you, that's truly all you need. If you already have the skill-set and the talent, that will do so much of the work for you. You just need that one person to give you a shot, and you'll kill it.

Phoebe Robinson's Everything's Trash, But It's Okay, is out now, featuring a foreword by Ilana Glazer. The author will also be going on tour through October.