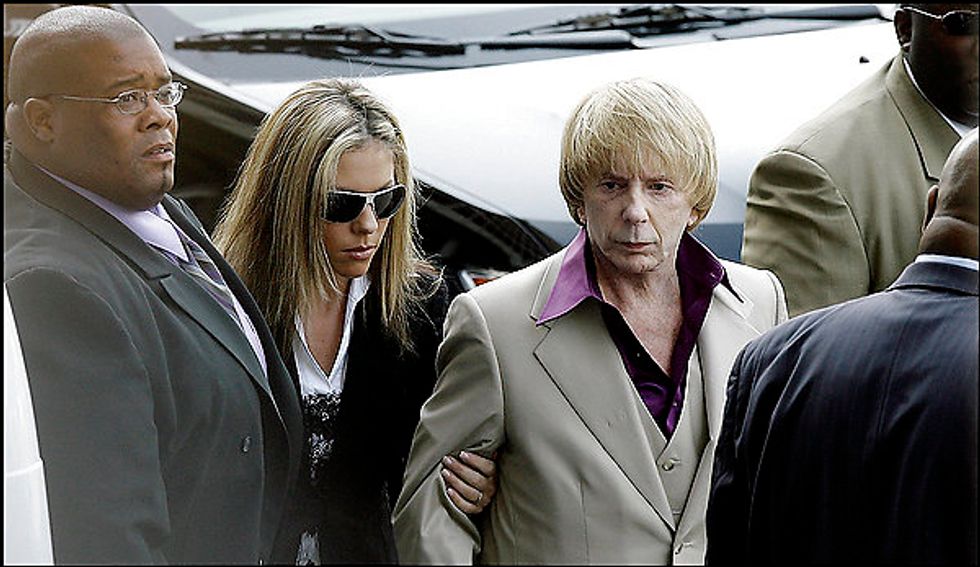 I don't think anyone can put it better than The Washington Post did in Thursday's article, "A Noir Opening to Phil Spector Murder Trial":

Another creepy and sad celebrity murder trial began here (in L.A.) Wednesday morning as the troubled genius and record producer Phil Spector appeared before jurors in a courtroom down the hall from the one where O.J. Simpson was tried and acquitted.

The 67-year-old diminutive musicmaker arrived wearing a blond wig cut in a pageboy style, dressed in a cream-colored suit with a cranberry shirt open at the collar and a matching pocket handkerchief. He was accompanied by three burly bodyguards in pinstripes.

Spector's natty Saturday Night Fever outfit stood in stark contrast to the sordid and bloody facts being laid out in court. You can read all about it at the L.A. Times' ongoing Spector trial BLOG (Bookmark it now!). Ugh. Ick. Ew. Yuk. But can we turn our attentions away to something more lofty? Doubtful. Just wait till this tidbit from The Smoking Gun get's aired out for the jury (and media):

Spector, who recently ironed some of the crazy out of his fright-wig hairdo, was tape recorded as he spoke with Detective Esther Pineda of the Alhambra Police Department about the February 2003 death of actress Lana Clarkson, who died of a gunshot wound. As seen in the below excerpt from the interview transcript, Spector, who was in custody, began to fly off the handle after Pineda told him he was being charged with murdering the 40-year-old Clarkson. After requesting to speak with lawyer Robert Shapiro and two business associates, a frustrated Spector, 67, seemed to snap. "I'm gonna make you fucking people pay for this. This is bullshit," said Spector. He then claimed that Clarkson, whom he met at the House of Blues nightclub, was a "piece of shit" who came into his home and committed suicide. "I don't know what her fucking problem was, but she certainly had no right to come to my fucking castle, blow her fucking head open," he added. Spector's driver, however, told cops that he was parked outside the record mogul's home on the morning of Clarkson's death when he heard a "distinct loud noise." Moments later, driver Adriano DeSouza recalled, Spector emerged from his home's back door holding a handgun. He quoted his boss as saying, "I think I just killed someone."

But Spector's defense attorneys insist Clarkson put the gun in her own mouth and pulled the trigger. And science will prove it! If anyone can convince a jury (or the rest of the world) of that it might be John Gotti's former lawyer. And so another macabre circus officially begins here in La La Land. 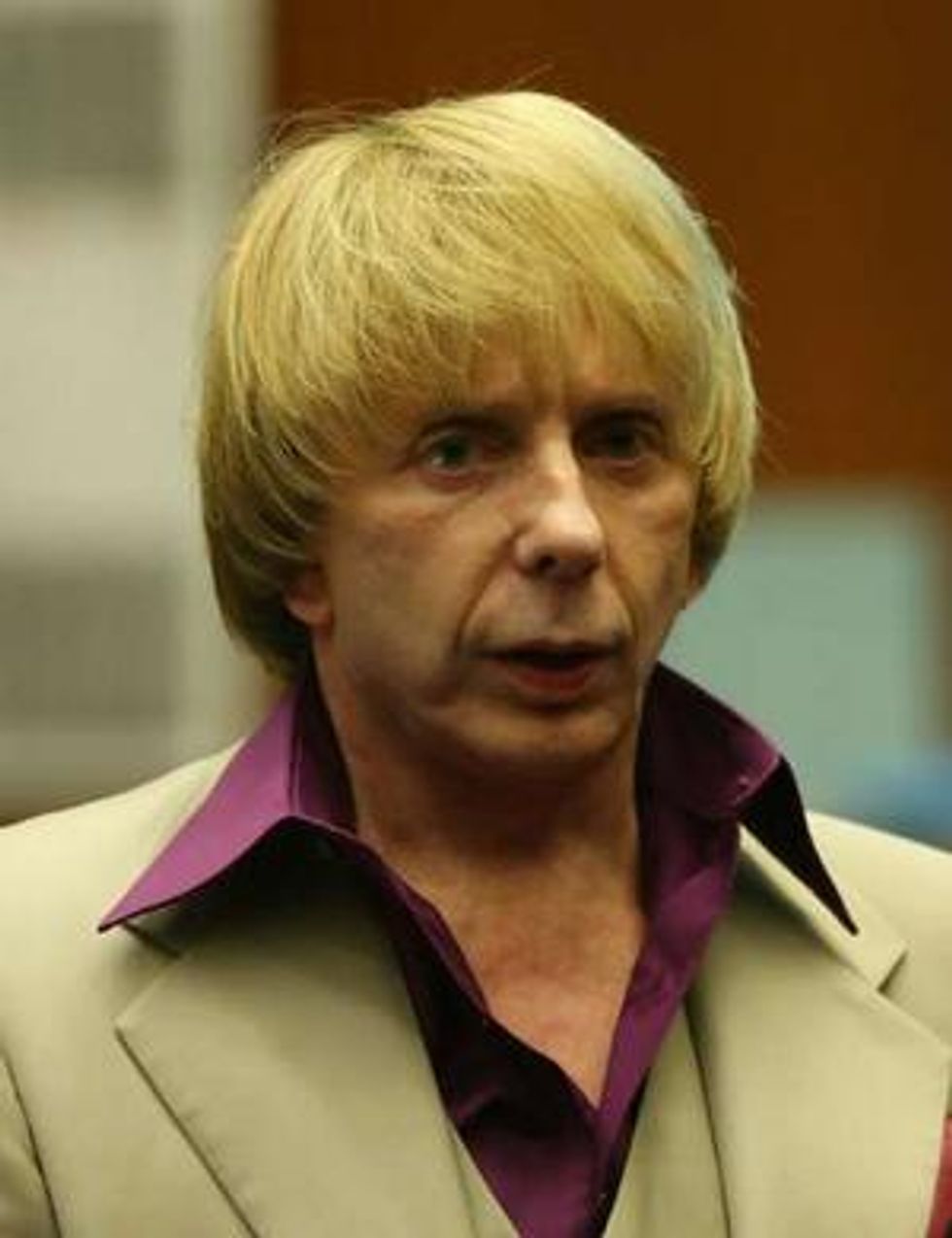 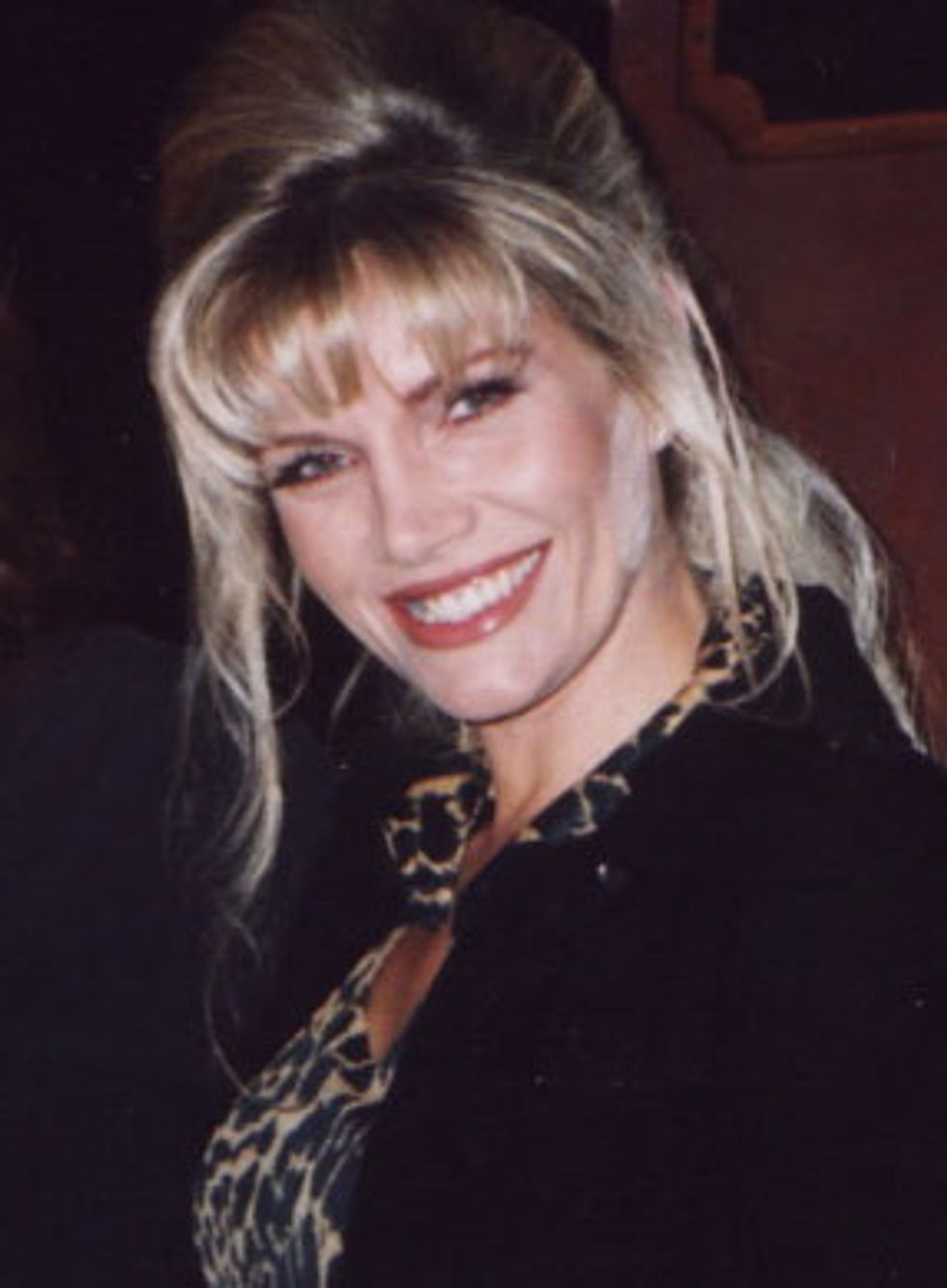