Perfume Genius Reflects on His Breakout Year, Gets Needles Stuck in His Face 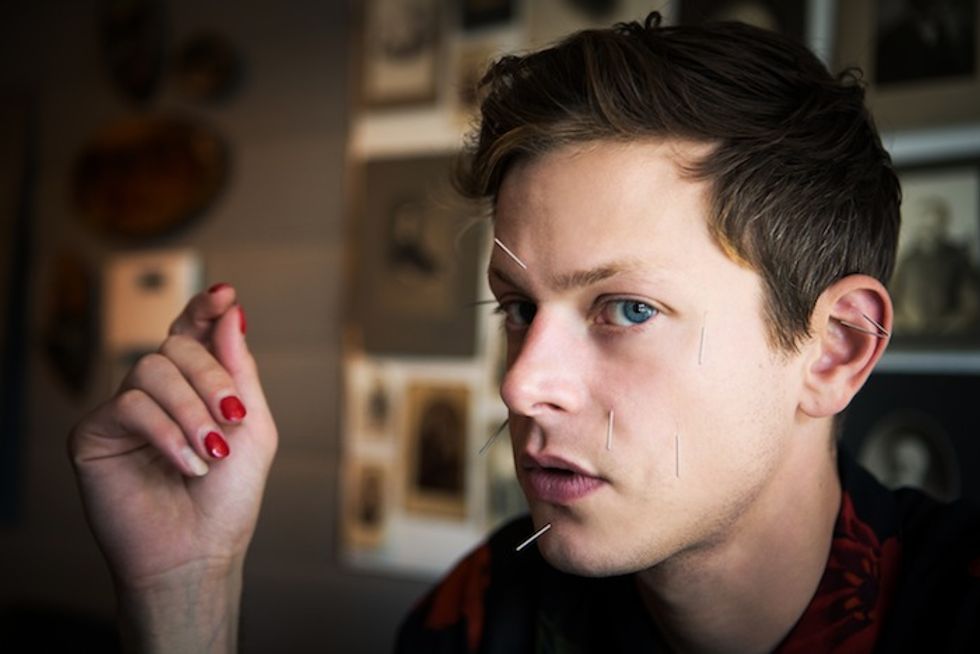 Mike Hadreas once named an album Put Your Back N 2 It, but this was the year he finally took his own advice. Once known for self-described "sad sack" balladry, this year Hadreas released Too Bright, his third album as Perfume Genius and his most exuberant offering yet. Too Bright went on to dominate year-end lists, and his Bowie-worthy performance of "Queen" on Late Show with David Letterman became an online hit. PAPERMAG recently called the Seattle artist at home to talk about learning to believing in himself and the horror movie that made him cry.
2014 was a really big year for you. In terms of popularity and critical acclaim, it seems Too Bright took things to a new level.
Yeah, things have been great. It's been beyond what I thought was going to happen when I made the album.
Plenty of critics have said that it feels like you came in to your own on Too Bright. Do you agree?
Yeah, there are some songs on the album that are similar to how I've written in the past, but there are a bunch of songs on there that are very different, and the process of making them was a lot more experimental, even improvisational. I flipped everything, a few times. I started writing over louder [music] ... I wrote over noise and distortion and shifted my vocals, and just from that different way of writing, the things I wanted to say changed, and emotions I didn't know I wanted to talk about or needed to process started coming, and I started unlocking weird shifts.
What were some things you didn't want to talk about?
I guess some some of the more angry moments on the album. The way that I normally write was writing stories from the past, and looking at memories and things that needed fixing and healing, trying to process those. This album has a lot more songs where I'm singing at people. It's not storytelling anymore; it's more me waving my finger at people a little bit.
From your perspective, does it seem like your album caught on with more people than before?
I think so. I was worried when I had the new music that people that liked the first two albums, were waiting for another really slow, melancholy thing, because I know what it's like to wait for that. I know what it's like to wait for a Cat Power album, and hope there's two elements to it and it's just her and a piano. But it seems like the old fans are still into it. And I got some new fans. People like loud music, it's louder, and just as a byproduct of it being louder I got more fans. And it's easier for people know how to feel about it. The emotions sound like the music. Before, I would have darker material and the music underneath it would be sweet and soft, but now when I'm singing about something dark, the music is equally as dark. 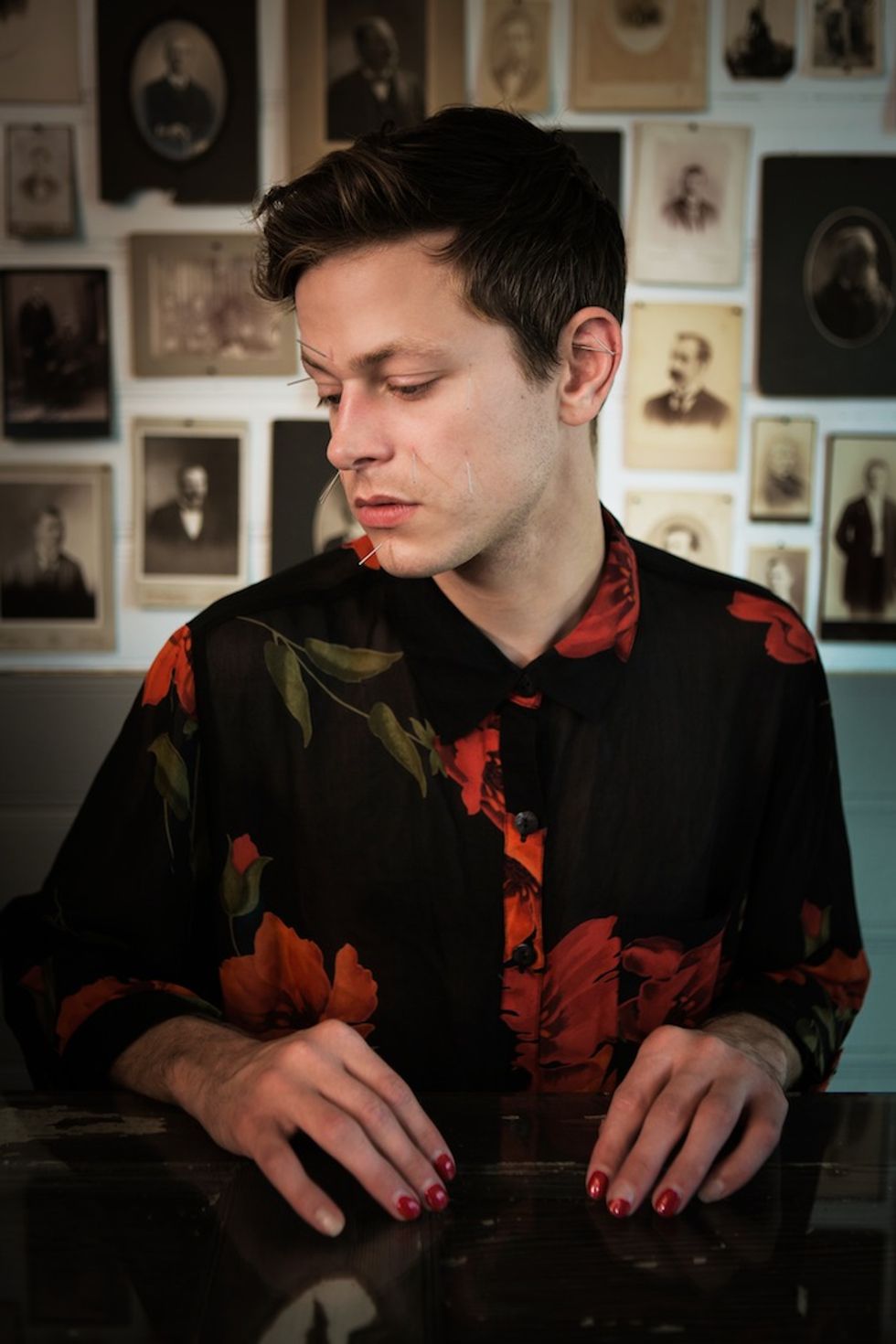 But at first you were worried about disappointing people who only liking you doing one thing. Was that tough for you to get past?
It was tough after the fact to think about. When I was writing I was thinking of my fans and hoping people would like it, and even the newer songs I was writing with other people in mind and hoping it would be liberating and moving to them as it was for me writing it. I just know what it's like to listen to sad sack music and go to shows and wait for that one song that they're going to play solo. And I feel like some of my fans are attached to that kind of thing. But I think it just takes more listens.
Beyond the album's success, how was this year for you?
It was OK. We just came out from two months straight touring. The nature of the album, a lot of the songs are harder for me to sing and more complicated to perform; it required a lot of newness for me. There's some singing and some dancing and screaming, and these are all new things for me, rather than being behind a piano and emoting. So it took a few shows in the beginning, but I'm proud of the process. How I went for it when I was writing, I went for it in all the shows, and I screamed really loud, with intent.
So you've been dancing on stage too?
I have been dancing, yeah. Pretty much I have one signature slinky hip move that I do, but I really let it loose.
Were you consciously trying to get people to think of you other than a sad sack?
Oh no, people can think whatever they want. I don't mind that.
So the change was more for you, and you weren't trying to change the way people thought of you?
I never really was. Well, I don't know if that's all true. I go up and down. This album is showing more sides of myself that were always there. To me, it doesn't feel like a big departure, just sharing more, and sharing different things than I had before.
It doesn't feel like you're trying too hard; you're just showing a lot more command of what you're doing, is the sense I get from Too Bright.
And that was really important to me. I felt like I had that in me, a little bit in the beginning, and it took me a while to believe that it was a serious thing and that this could be a career and that I'm a capable writer and performer. I overcame a lot of insecurities about that for years, even when I was touring, and for this album I wanted to shake all that off and to take it seriously and to stop thinking I have limitations in how I can write and what I could say and how high I could sing. I wanted to let go and see what I could do if I stopped getting in my own way.
Because originally, long before you had an album you posted some songs online, and it took off from there. Did it get bigger, faster than what you were prepared for?
Yeah, big time. I made those songs when I was working, making keys and mixing paint and stuff at a department store. I was really into making those songs and I did that in a manic and obsessive spree of writing music. I didn't post those thinking I'm going to have a career. I thought my whole life that I wanted to do something creative, but I didn't have this dream in my head about what that was going to look like. Music was almost the last thing on earth that I thought I was going to do. So when people started listening to Myspace songs and my friends from the UK flew out to meet me and gave me a record deal and stuff, it was pretty cool.
When did you notice that change in yourself?
The first couple of albums gave me a lot of great opportunities. I met a lot of people, people wrote me letters and I was like a musician guy on tour. I made enough money to pay my rent every month. But I didn't match up to it in a lot of ways, mentally. It felt insecure. For the most part, when I was given opportunities I took advantage of them, but there were a few times where I let things go or didn't really put everything into it because I was scared. It was very frustrating that I would have all this going on and not take it as seriously as possible and believe in it as much as I could. That was the catalyst in me trying to shake it up.
It took a little while for you to get comfortable and feel like you actually belonged.
Yeah, in every way. Because beyond this music stuff happening, I hadn't done that personally before. I hadn't really shown up as who I am. Blah blah blah, kind of cheesy therapy stuff. 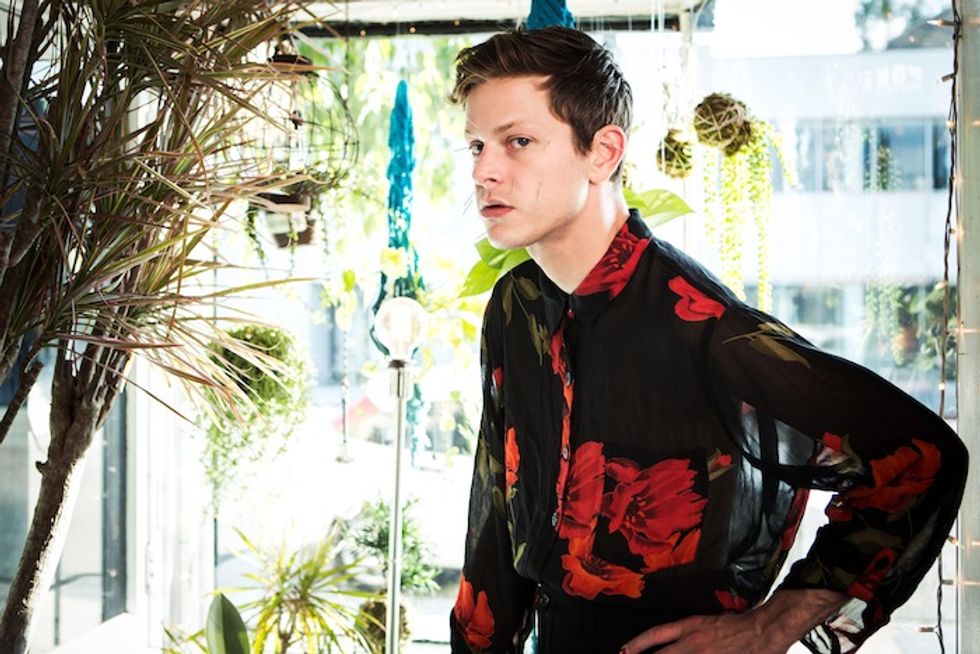 As far 2014 goes, were there any albums or movies or anything you were really into?
That horror movie The Babadook. I watch a lot of horror movies, bad ones, good ones. I really like that one. It was emotional; I cried. I haven't cried during a horror movie in... actually, I don't think I ever have. So that's a good meeting of two different things I like. [laughs] I like the Angel Olsen album a lot. The [FKA] Twigs album, I liked. EMA, I really liked her last album. Have you heard that Mas Ysa EP?
No, I haven't.
I really liked him, and he's probably one of my favorite shows.
I saw a photo you did for the photo shoot. How did that happen?
It just happened. [laughs] It was their idea. I didn't invite them to my home and tell them to put needles in my face. I really wanted to do like an actual session, but it was more for show. He did put the needle in the right spots, but without his usual spiritual tenderness. He just plopped them all in there. He did tell me, though, that I need to eat more read meat because I don't have enough blood pumping through my body.
Did you have to be talked into this, or were you down to get needles in your face?
I was actually a little disappointed; I wanted more needles. I wanted to really go for it.