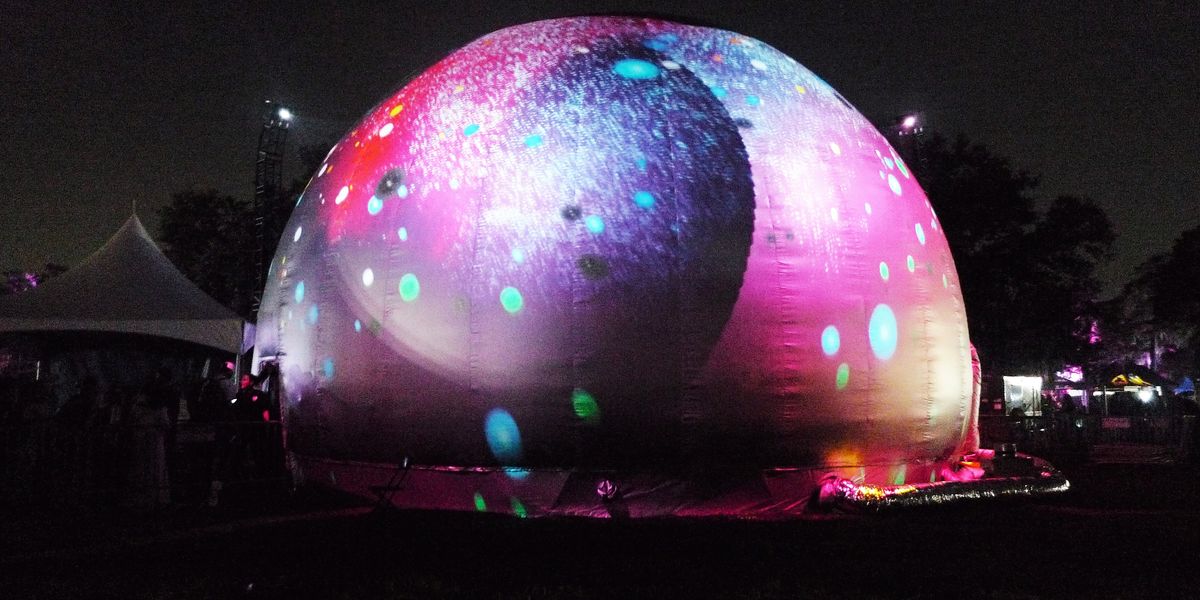 Inside a silver dome near the Flambeaux stage in New Orleans's City Park, Halloween's Voodoo Fest attendees dressed as astronauts and flappers watched images of skulls and Andy Warhol float across a 40 foot screen. Original music, scored by a team of designers, helped the 18-minute piece transition from Warhol into a later animation of a graffiti artist and splashes dripped down the dome.

The Pepsi Art Dome at Voodoo Fest was produced by the digital media company Likuid Art and PepsiCo Creator -- a marketing innovation team that connects creators on the cutting-edge of art, technology, music, gaming, and the culinary world to help amplify their platforms. The collaborative installation, which features animated work by eight visual artists, takes the viewer through a trippy art galaxy -- each artists essentially gets their own planet.

"It felt like I was going to different planets," said Diana Sanchez, 21. "It was intergalactic traveling."

The idea for this massive project, which brought together artists and animators from Russia, Thailand, New Orleans and beyond, all started from one ten-second GIF. About eight years ago Likuid Art's CEO David Booth Gardner saw his friend's animated cityscape. He then watched the DVD, he says, on repeat all night.

"In that moment I saw what could be the future of art," he said. "I knew that artists were going to start creating by using digital tools."

As a producer of documentaries, Booth Gardner did not have many connections in the art world, but over the next few years he started meeting artists, which included Karen Bystedt whose negatives of Andy Warhol from the 1980s were animated as "Warhol Cubed" for the installation. The other artists showcased in the installation are Jon Moody, Kelly Graval "RISK", Greg "Craola" Simkins, Chris Saunders, Android Jones, devNgosha and Andrea Fellars.

For this installation, the selected artists submitted a piece of art -- such as Craola's painting "Where Am I" -- then, in most cases, were pretty hands off as the team of animators and composers did their thing.

"We kind of just bounced ideas back and forth, and I got comfortable," said Craola. "I got more hands off knowing that the people that were selected were super talented and knew what they were doing."