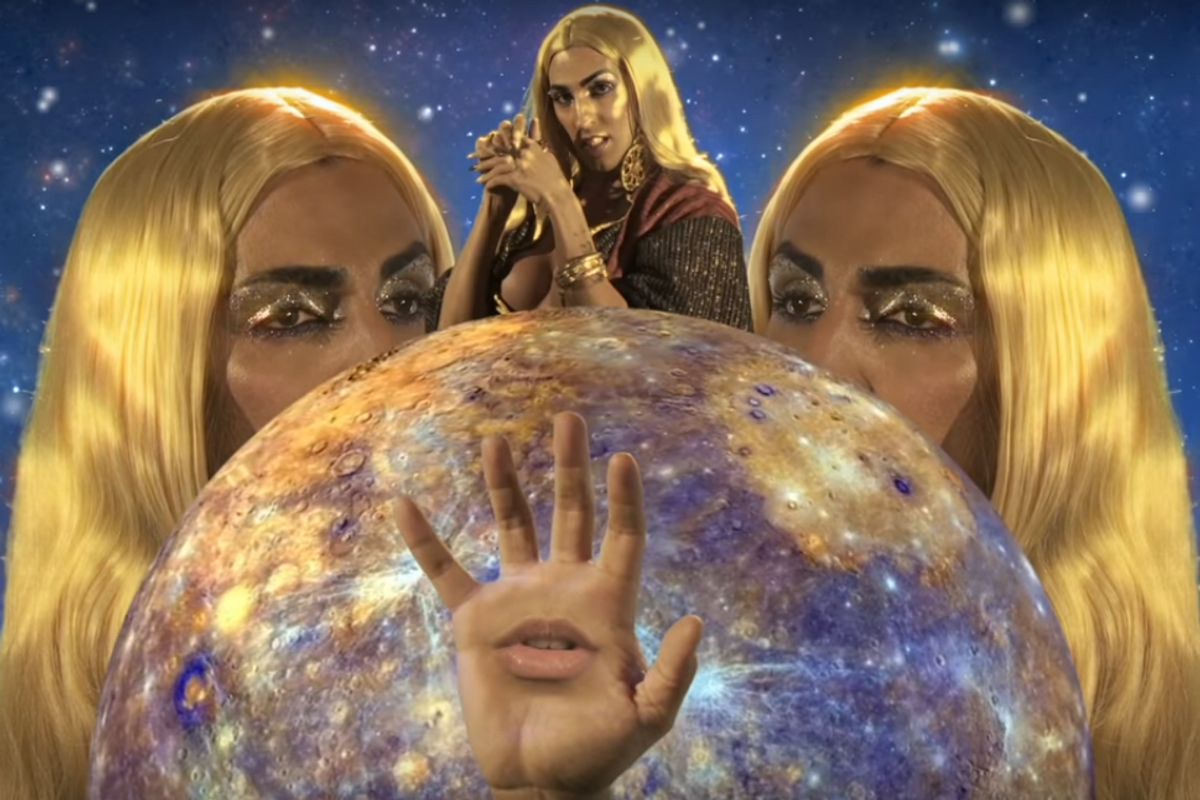 Get ready to be mesmerized by Brazilian pop duo Phillipi & Rodrigo's trippy video for their newest single, "Retrogrado," because as it turns out, all that glitters is gold. The Pabllo Vittar producers have whipped up an organ-laden, psychedelic voyage through the galaxy, starring transgender activist Pepita showered in gold flecks of glitter and iridescent shimmer.

Musically, the track's echoing vocals atop a distorted beat sing of the cosmos and connection, while visually Pepita shifts the solar system. Images of all-seeing eyes and talking hands are spectators to Pepita's all-powerful voyage through outer space. One Pepita soon becomes many, and the duplicating army of Pepitas swirl amid the planets, over and over into oblivion.

Powerful looping synths compete with a comparatively understated bass and drum pattern on "Retrogrado" to create a feeling of forward movement within the song. The track is like a never-ending road trip through some whooshing, Portuguese indie-pop vortex, and it's glorious.

The video director, Ruda Cabral, says that the video was inspired by the universally non-binary relationships between humans and "hard science and religion, or magic and placebos." Cabral also cites '60s Spiritualist art as an influence for the more eclectic visuals that appear within the video. These influences make sense when considering that Phillipi & Rodrigo first set out to make a track with defined roots and inspirations. "We did our best to try make a cohesive pop song in the vein of Stereolab with a Krautrock beat and cosmic lyrics," the duo says of the track as a whole.

The release of the video coincides with the announcement of the duo's debut album, Paciencia, which is set for release on February 22. The nine-track record will include "Retrogrado," in addition to previous singles "Mantra" and "Karma," and will explore the complexities of astrology, relationships, and the stars. You can pre-order the album now, and check out the exclusive PAPER premiere of "Retrogrado," below.