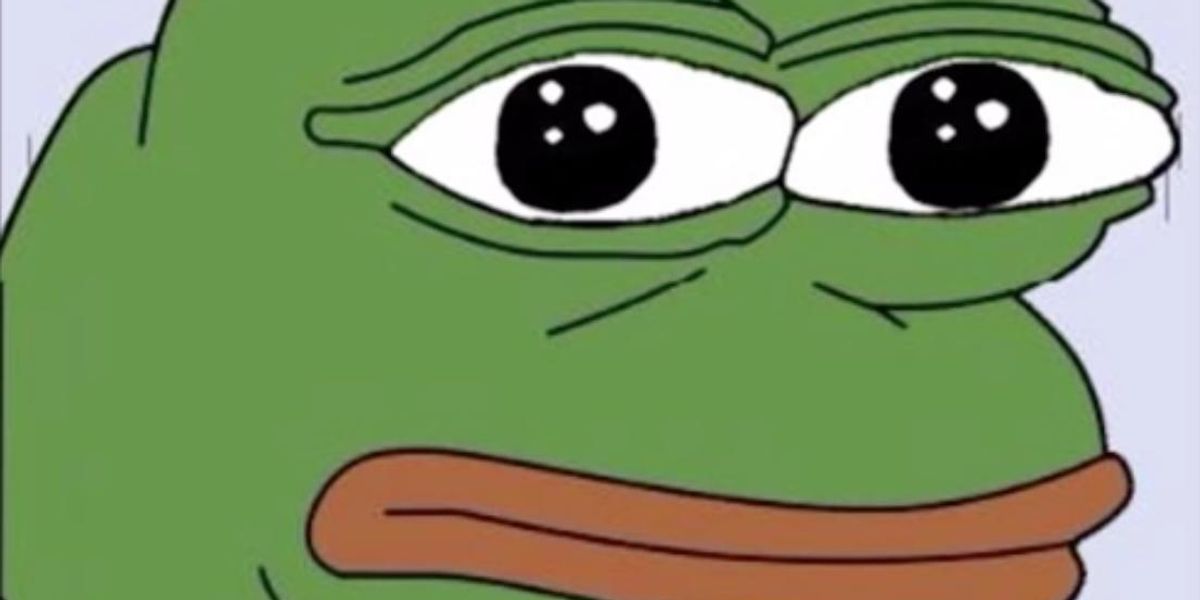 Meet Pepe's Papa: A Chat With The Man Behind The Internet's Favorite Meme

Matt Furie is an LA-based illustrator and comic artist who has the (v rare) honor of being able to call himself the creator of a universally-loved Internet meme: Pepe the Frog.

Where most memes enjoy a short-lived ubiquity (until the Internet's fickle taste crowns a new favorite, that is) Pepe has endured, transcending the usual meme lifecycle. But the net-at-large doesn't seem to be super familiar with Pepe's Papa, who originally inked the anthropomorphic amphibian on Myspace in 2005, and then solidified him as one of four teen roommates in his weirdo stoner comic, Boy's Club. Furie's determined to keep his legacy alive, however, via a line of official Pepe merch and the recent release of his compendium of Boy's Club comics. And as such, we spoke to the creator himself about the origins of his frog alter-ego and how it became, arguably, the most pervasive meme of all time.


Can you tell me a little bit more about how you initially envisioned Pepe?


He's just a classic frog archetype. Like frogs are classic characters -- just kind of nice, very chill. They just like to relax and hang out in the pond and eat flies or whatever. They're just a nice symbol of having a chill attitude in nature. I kind of translated that into my own early twentysomething lifestyle -- living with roommates, just hanging out and the shenanigans that ensue when you're living with a bunch of people. Pepe the Frog was just one out of four dudes that lived together. The just joked around with each other.

Frogs seem to be a recurring theme in a lot of viral memes -- like Pepe, Kermit sipping tea and dat boi -- do you have any insight into why?

I think it's similar to cats in the Internet. Everybody loves their little cat -- cute pictures and stuff. The [symbolic] roots of the frog also run pretty deep [in our collective childhood culture like] with the Princess and the Frog, and Kermit. So it's kind of just like this classic motif. We're kind of surrounded by frogs.

Can you tell me a little more about Boy's Club and its origins? Who else is there besides Pepe and how does he interact with them?

So there's Landwolf -- he's just like the archetypal party dude. He wears sunglasses and has a peace sign on his shirt. He's the one who can just party really hard and it doesn't seem to affect him as much as the other guys. He's always getting stoned or drunk, or taking acid and doing cocaine or whatever.

And then there's Brett -- he's more of the fashion guy. He's also kind of the dancing fool, so he likes to dance around and try on different outfits and he does a little bit of transcendental meditation and yoga, and stuff like that.

And then there's Andy, who's the abstract dog creature. He's more of the smart alec -- he's always rattling off jokes or playing pranks. Or just saying a bunch of catchphrases like "Got milk?" or "Just do it" -- all that stupid advertising stuff that gets programmed into your head from just living in this culture. So he's just the jokester.

Then there's Pepe. He's kind of the everyman frog. But they're all just these nerdy guys that live together. You know, it's all loosely based on my own life...


Right, so I'm curious, obviously all these archetypes are really common and phenotypes that people can identify with...so why do you think Pepe stood out to the Internet at large?

I paid some attention to it online, and it seems to have started with [this one comic I did] where he pulls his pants all the way down to go pee and one of the guys walks in on him and is like "Whoops." And then later on, Pepe and Landwolf are playing video games and Landwolf is like "Hey, heard you pulled your pants all the way down to go pee," and Pepe says "Feels good man" -- so somebody online cut up his face with the " Feels good man" phrase and people just started using that as a reaction to things on message boards and stuff. So, "Just finished my exam today -- feels good man" or "Just had sex -- feels good man." So you could just use it as a visual response to things and I think it kind of like evolved from that.

Was there a particular moment where you were like "Oh shit, Pepe has taken over the Internet"?

I think I discovered it in the first wave -- this kid sent me a YouTube video. He made a music video of Pepe's "Feels good man" and it got like half-a-million views or something like that, and I was like, "Woah." But that was kind of early on and people just kept sending me stuff like, "Hey have you seen this?" and I would be linked to things. There was a period of time where I was getting messages almost daily. People were emailing me images of Pepe, weird versions of him like as a gothic female or trying to electrocute himself or really weird, violent ones -- you know like [the ones where he's] torturing people.

Jesus, I didn't even realize that there was this dark underbelly of like fucked-up Pepes. I read somewhere that Pepe kind of grew in popularity on 4chan, which is infamous as being a site that incubates a lot of dark stuff on the Internet. Do you think that's part of it?

Yeah. [It was just strange to me that] at least one vein of [Pepe's spread] turned into this most grotesque manifestation -- spanning even into like Nazi shit and rape. It was just kind of pushing the boundary.


The fucking Internet. Well, on a lighter note, do you have a favorite iteration of the Pepe? Do you like the celebrity mash-up or the Good Luck Pepes?

[There's this photo that's] like a collection of all these Pepe heads -- somebody selected a bunch of ones -- they all looked so crude and weirdly drawn and I really liked how they just looked like they were done by children on MS paint. It was just really bad. But I actually referenced a lot of those and made my own pattern based on those [for] an official Pepe T-shirt line. It's kind of meta -- like all of these people were bootlegging Pepe on T-shirts, so I made an official T-shirt line, but used bootlegged Pepes as the pattern for the shirt.


How does it feel to literally see your art everywhere? Does it ever raise issues related to artistic appropriation for you? Do you ever feel like you should've copyrighted this?

Yeah, technically it is copyrighted. I have gone through and actually [registered] it, but you know there's nothing you can do to stop all the different manifestations of it. It's kind of like whack-a-mole. If you send a cease and desist to somebody, another is going to pop up somewhere else. It's kind of pointless. And it's kind of fun, you know, it's not going to last forever.

I don't know, Pepe feels like he's going to last forever. He's probably one of the longest running memes out there, which is kind of surprising in an online landscape where two days is forever in Internet years.

Yeah, I'm definitely kind of proud of that.

Why do you think he has such sticking potential?

I have no idea. I think it's just fun to remix it and remake it into something else. The interesting thing about it is, I have cousins who are pretty young, 12, 13 years old, and that generation of kids is really into Pepe.

That must be a pretty cool claim to fame for them -- "My cousin created Pepe."

Yeah, my cousins are pretty stoked on it. My cousin Maggie was telling me that she plays volleyball and one time they were playing a team that used Pepe as their mascot. And this is in suburban Ohio. So that was pretty random, but she thought that was pretty cool.

Yeah, like I said, that's when you know you're true Internet legend status -- when its transcended from online to IRL. On that note, what do you think about the people who get Pepe tattooed on themselves?

Yeah, it's like this crazy sort of promotion that happens once in a while.

Would never get a Pepe tattoo yourself?

Actually, my friends and I were hanging out literally last night -- me and some artist, illustrator friends -- and my friend, he's tattooed Pepes on 3 of my friends and he tattooed a Landwolf on himself. But I have no tattoos. I have a fear of needles.

Okay, fair. Just stick with the shirts, then.

Yeah, I do enough drawings and stuff. I don't think I want one that's permanently etched on my body. But I think it's cool when other people do it.

Yeah, for sure. Speaking of which, why don't we talk a little bit more about merchandising this meme? I know you have a book that just came out.

Yeah, I've just been sitting on the comics for a while. I kind of moved on from them. But, I guess with the popularity of Pepe, I was like "Maybe people should check out the roots of him, at least." I think it's interesting that he's known as Pepe -- because that's his name in the comic and everything. Even when he went viral, his name is still Pepe. Also, [it's strange because] the popular version of him online is him being really sad, but in the comic, he's literally only sad once -- in one panel. And that was the one that got popular for some reason. In the rest of the comic, he's all happy. So it's weird that the sad version of him is the one that kind of caught on.

Yeah, but maybe an Internet full of sad kids just identify with a morose-looking frog. Speaking to your other point though, where did the name Pepe come from? Kind of an odd choice of moniker -- like you could've just called him "Joe."

Well, I just thought it was funny to call it Pepe, because it kind of looks like "pee pee." Yeah, him peeing with his pants down, that was kind of the original [impetus for his Internet spread].

I'm crying. Okay, so I'm also curious to know, do you have any other favorite memes? What other online culture staples do you enjoy?

That's a good question. I don't know. I just saw some weird [group] on Facebook that I've been following called "I smoke dabs all day listening to Korn while drawing." It's like this really weird, long name, but they always post things....like weirdly Republican things. They'll post a picture of an alien and it'll say, like, "I don't want you or anyone in your family telepathically communicating with me again."

Yeah, I guess thats the root of it. I don't know, I guess some of the stuff is lost on me, but I'm still amused by it all. It's just a vast wasteland of crudeness.

That's true, the Internet truly is just a vast wasteland of content. But I'm also curious, where do you see Pepe going from here? Do you think he'll continue to stand the test of time and be popular for another -- what's it been now-- like 7, 8 years?