"Are you with me? Cause if you're not with me, you're against me." When reigning Swedish Rock God Pelle Almqvist prods the crowd of Belgians with this question, as is captured on the Hives' new DVD release Tussles in Brussels (Universal), affirmative teenage yells (if only it was England, they'd have been "Oi's") come roaring back at him and the teenage audience at the Ancienne Belgique teeters on the edge of a riot. Now, as with any concert DVD, one could complain that the sound quality on a TV isn't that great, the camera angles are constraining, the energy of the performance is poorly conveyed, but let's not go there. Anyone who's seen a Hives show knows they are the greatest rock band in the world, and to say otherwise would be sacrilege.

The Hives plan to screen the DVD in movie theaters throughout Sweden. "This will really be like seeing the band play live in a way," explains Hives front man Pelle. This is great news, of course, for those who haven't been fortunate enough to see the band play live. Most notable among this group are the Hives themselves. "I will watch it just once I think," says Pelle. "That way, I can decide if I am as good as I tell everyone I am."

In addition to the live performance in Brussels, the DVD features an animated documentary of the Hives narrated by the legendary Little Stevie, a full collection of Hives music videos, and a near complete array of the band's live television performances, spanning all parts of their career.

DW Johnson's The Hives, Hinduism, & Me, the Steven Van Zandt-narrated documentary, is beautifully crafted, interweaving the Hives' epic journey from small town Sweden to international Swedish Rock God status, with the occasional old clip of the band performing, and photos of the Hives as youths. While the film is a bit repetitive at times, it's repetitive in a dreamy, Philip Glass sort of way. Combine the hypnotic effects of a Philip Glass album, and the mind-controlling rants of a Darby Crash monologue (a la the quote that opens this article), and that's the sort of effect the film evokes.

Better than the live performance and film, at least in terms of capturing the essence that is the Hives, are the music videos and TV appearances. The DVD is the only place to see the videos for "Abra Cadaver" and "Two-Timing Touch and Broken Bones," which like all Hives videos, manage to be both deadly serious and totally not serious at the same time. The TV performances are cool in that they document the changes in, or, perhaps the honing of Pelle's on stage persona; though it's a persona that he denies even exists. "That's just me on those TV shows. I don't go into character on stage as people may think. When I watch, it just looks like me." And who are we to question.

Finally, the DVD shows how the Hives' fashion sense has evolved since their first album, Barely Legal, through their sophomore release, Veni Vidi Vicious, to the present day, following 2004's Tyrannosaurus Hives. As time passed, black suit jackets became white dinner jackets and skinny ties became old fashioned, loopy neckwear. And this is not a superfluous fashion choice for the Hives. Pelle insists that the band cannot play without their signature suits. In fact, it's not just having the right type of suit that matters; they need the exact same suit for every show. "We each only bring one. It doesn't get washed all tour. Good if you stink cause it makes you much more aggressive for the show if you have to go on stage in a damp stinky suit." 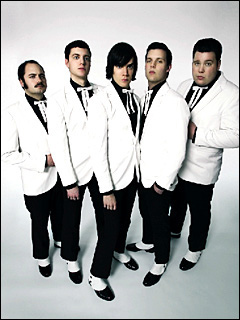 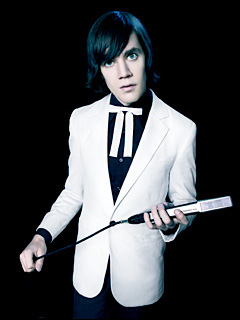