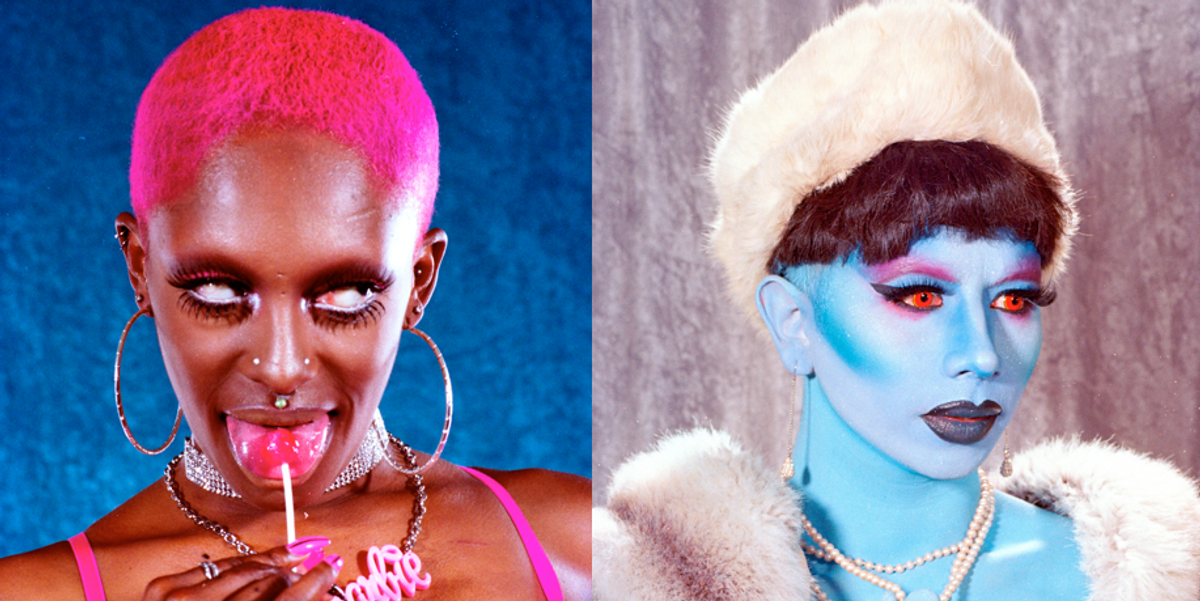 This month, the Los Angeles-based photographer Parker Day unveiled ICONS, her first major solo exhibition built around 100 super-saturated portraits, all shot in 35mm, featuring a smorgasbord of incredible props and trippy backdrops. It's an unprecedented collection of some of the most visually and spiritually arresting figures in the fashion, art, and culture multi-verse. The show opened February 4th at the 4,000-square-foot Superchief Gallery in downtown LA. Day, a Bay Area native, spent the last year and a half pulling in and shooting models, nodels, club kids, weirdoes, freaks, geeks and celebrities in a saccharine supernova of color and attitude that could be described as the wet dream turned lovechild of David LaChapelle and Cindy Sherman. Day released a companion book, also called ICONS, which is being published by not a cult, and will be taking the show to Portland and New York next month. We caught up with Day over the phone, in-between teaching her Himalayan cat dance lessons, and discussed comic books, the dubious reality of all-female art shows, and the surprising benefits of being named after a jazz legend.

What compelled you to start this series?

I was searching for something to sink my teeth into. I knew I wanted to make a big splashy series. I also knew that I wanted to do 100 of something, just because it sounds like a huge number and it was a personal challenge. So in my experimenting, I started bringing people over to my house for studio-style shoots. I just started dreaming up these costumed characters; like campy John Waters-meets-David Lynch. From there, it just clicked.

What about influential photographers? I see a lot of David LaChapelle in the color and irreverence.

Oh my God, yes. When I was just a young punk in the late '90s, like many kids, I would rip pages out of magazines and put them up on my wall. I didn't know it at the time, but I always ripped out LaChapelle's photos. I loved The Face magazine. They had the hottest shit in the world back then and it was my window into fantasyland. There was no Tumblr at that time, of course.

Do you think that kids still rip pages out of magazines and hang them on the walls, or has that gone the way of the dodo with digital media?

I've been wondering that, but I don't really know, mostly because I don't talk to that many tweens. [laughs]

Let the record state that I don't either.

Things are definitely moving online, but at the same time there's this zine resurgence. But going back to influences, people always compare my work to Cindy Sherman, but I tend to shy away from that, though I studied her a lot in art school. And I still love her.

Where did you go to school?

I went to Academy of Art University in San Francisco. I should say, though, what really gets me going is street photography. I love William Klein. I love all the guys who were working in the '50s in New York--so many raw characters.

So I read you grew up in San Francisco and your father owned a comic book store.

The shop was in San Jose, near Silicon Valley. It's closed now.

Do you still have some comics from the collection?

No, my mom sold them all, unfortunately. But dad knew everyone in the underground comic scene in the '70s, like R. Crumb, who made his business cards. I remember Crumb painted this life-sized cutout of one of his bold legged women that stood in the shop window. It was so good!

I heard that you weren't allowed to read those books when you were young, which always leads to this hyperbolic interest in what your parents deem taboo or off limits.

It definitely gave me a lot to wonder about, but I was very respectful of my dad's collection to the point that I revered it. I loved to use my imagination, but I'd be lying if Crumb didn't color my perspective of the male/female dynamic. [Laughs] In all seriousness, seeing these towering, powerful women did make me feel better about being such a weird little kid.

When did you pick up photography?

As a kid I would shoot with disposable cameras, but the breakthrough moment came when I had printed out my first photo series in high school for a final project and I had this weird melancholy come over me. Seeing a reflection of myself in the faces of my friends kind of spooked me.

Have you surmounted that melancholy and angst--the inner darkness? I haven't.

[Laughs] What's so delightful and absurd is, the older I get, the more comfortable I am being the angsty and confused 12-year-old.

Tell me about the name Parker Day. It's gender ambiguous.

It is. It's my first and middle name. I don't like to go by my last name. I was named after Charlie Parker, the famous jazz musician and saxophonist. I was named before I was born. They didn't know what sex I was, so they thought Parker would work either way.

So you never had to consciously change your name, as many female artists do.

I remember when I was too young to fully understand, but my mom said, "When you're applying for jobs, your resume will go to the top because they'll think you're a man."

I want to stay on the angst, especially considering how many all-female art shows are out there currently raging against Trump.

I'm in one, Uprise/Angry Women. I have one piece in there. I'm conflicted because often these all-female shows are very reductive and the only thing the artists have in common is that they identify as women, and even more reductive that they only have vaginas. I think the show at Untitled Space has a strong point of view, but this is clearly a trend that flares up every ten years as a novelty, generates interest and nothing changes.

What are your thoughts on Trump? He naturally looks like an exaggerated character you might shoot. With a camera, just to clarify.

I try not to get into politics and try not to take a stance. The reason I don't like all-female shows is for the same reason. I don't philosophically like things that put a spotlight on one camp as opposed to another. I don't think the way forward towards unity comes through separation.

I think everyone's anger and frustration is valid, and however they choose to express that is theirs and they have their own motivations and I get that. I'm more interested in focusing my energies on malleability and what's between people and cultures and shining a light on where the lines are blurred.

As we mentioned, your name can read as ambiguous, but what do you think of this idea of identifiers. Are you a "female" photographer?

I'd rather leave that out--one hundred percent. I'm all about marketing, and that, as an artist, you have to be your own business and create your own brand. If it gets my art out there by putting a female foot forward, fine, but personally, I like when people say "he" or "they" when discussing my art on Instagram, for instance.

Let's talk about this show, ICONS, and the book. Where do you find your subjects?

Everywhere. I just like to give them the freedom to express themselves. I want to tap into this feeling of fight or flight--that pure potential when you're trapped in the corner and capable of doing anything.

Tell me more about fight or flight. I love that. Do you feel like women and perhaps quite a few people around the world feel that way now?

I think getting to that place; you find that you're capable of anything. We're so civilized and we do what we're supposed to do. But when you're in that emotional animalistic space, you can do incredible things to survive.